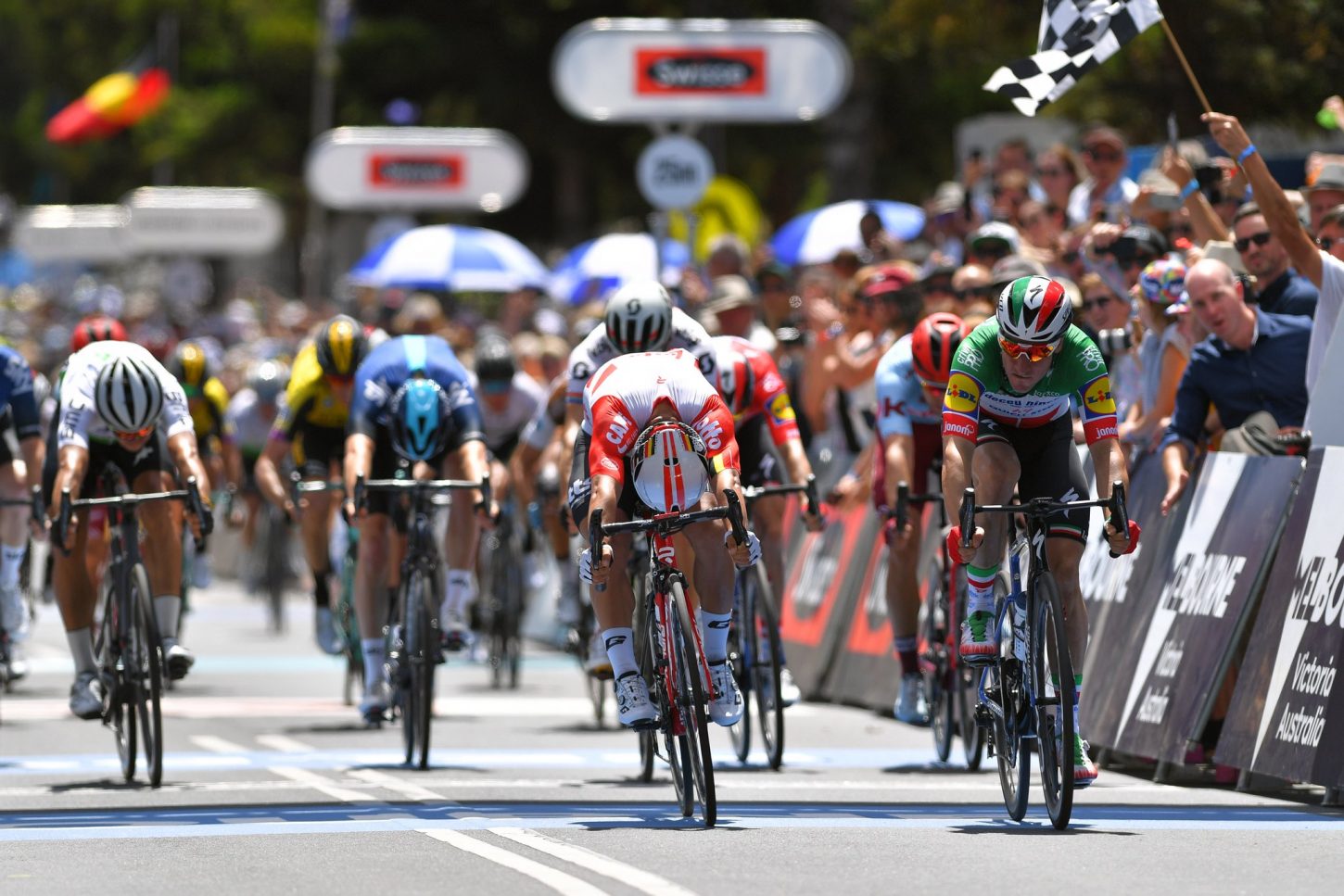 Deceuninck – Quick-Step’s Elia Viviani and his team-mates pulled off a perfect sprint in an exciting finale to the 2019 Cadel Evans Great Ocean Road Race.

Caleb Ewan (Lotto Soudal) was second by a matter of inches, and Daryl Impey (Mitchelton-SCOTT) third after a large group survived to contest the finish.

Davide Ballerini (Astana Pro Team) had attacked solo with 20km to go, and led by over a minute, but the peloton pulled him back before the fourth and final ascent of the Challambra Crescent climb in a tense end to the race.

Richie Porte (Trek-Segafredo) and Dylan van Baarle (Team Sky) both tried to escape the clutches of the peloton in the final kilometers, but Deceuninck – Quick-Step, Lotto Soudal and Mitchelton-SCOTT covered the attacks trying to set up Viviani, Ewan and Impey respectively.

Clearly in superb form after winning the Tour Down Under for a second straight year, Impey was protected by his Mitchelton-SCOTT team-mates as he saved energy for the finale.

Wout Poels of Team Sky was another rider with designs on victory – although he would need to shake off the sprinters’ teams on those later climbs if he was to stand any chance.

The Dutchman showed no lack of speed while descending early in the race as the peloton wound its way through Barwon Heads.

Porte was clearly feeling good on the first ascent of Challambra, as the peloton’s climbers started to come into their element.

As the race wound up for the finale, Astana Pro Team showed serious attacking intent as Ballerini bridged across to team-mate De Vreese, the final surviving member of the break, and launched his own bid for glory.

Meanwhile Robert Stannard (Mitchelton-SCOTT) produced a big counterattack as the kilometers ticked down, which only Kenny Ellisonde (Team Sky) could follow.

Daniel Oss (BORA-hansgrohe) did his best to splinter that large group on the final climb, trying to set up team-mate Jay McCarthy for a second straight victory.

But the group stayed together and despite those late attempts by Porte and Van Baarle to escape in a hectic finale, the sprinters’ teams were not to be denied.

However, Viviani proved to be the fastest and smartest in the sprint.

After sealing the 70th win of his increasingly impressive road career, Viviani said,“there were two second places last year that I wanted to improve in 2019, and this was one of them. I like this race a lot, I like the course because it gives a chance to every type of rider, so I was really keen on winning here. We were in four riders going into the final kilometers, which was very important.”

“The tactic [by rival teams] was to drop me, but we played smart and were always able to come back. I have to say thanks to the best team in the world, with Michael [Mørkov) doing a fantastic lead-out for me.”