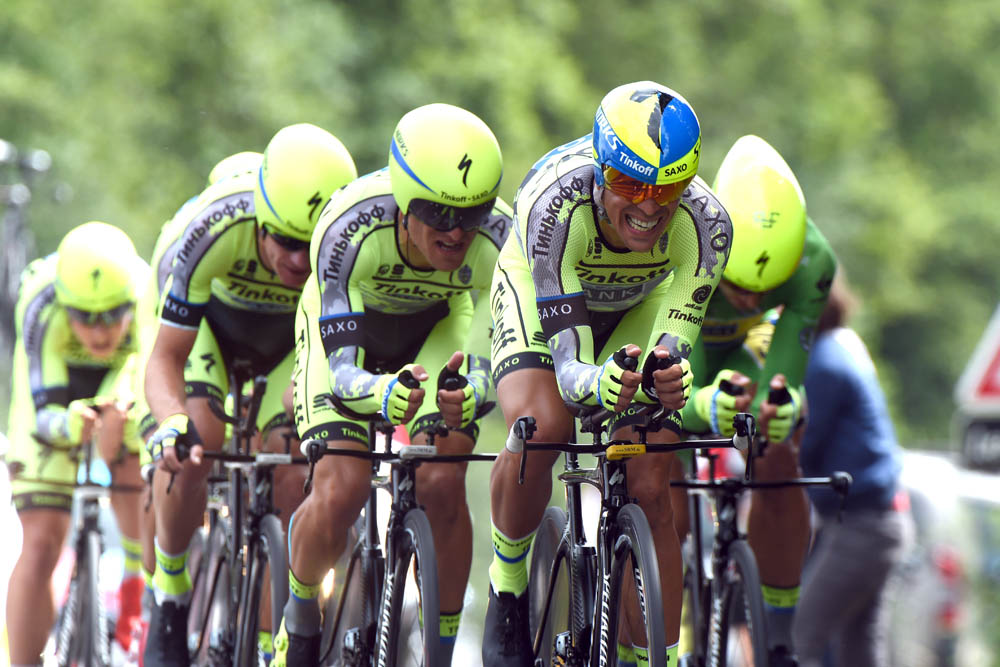 Cycling’s association of teams, the Association International des Groupes Cyclistes Professionels (AIGCP), recently issued a strong rebuke to the sport’s ruling body – the Union Cycliste Internationale (UCI). Generally fed up with the pace of reforms and with the economic pressures they face in trying to field teams for all of the WorldTour’s far-flung races, the teams voted to boycott the upcoming UCI World Team Time Trial (TTT) Championship in Doha. This potential walkout highlights the teams’ growing discontent with the UCI – specifically the expansion of the WorldTour calendar in future years – and the frustration of not having enough input in how they run their own businesses.

The key contention pointed out in the August 10, 2016 AIGCP press release announcing the boycott is that the teams will themselves have to continue to shoulder the costs of participating in what is ostensibly a UCI World Championship event. Whereas national teams receive support from their home federations to transport their riders, equipment, and entourages to compete in the World Championship road events, the TTT event is comprised of the top commercial or “trade” teams – not national teams. But even though national teams do not compete, the TTT has become one of the showcase races of the UCI’s annual flagship event.

It wasn’t always this way; long-time fans of cycling may recall that the TTT used to be one of the pinnacles of elite amateur cycling. A national team TTT was part of the World Championships format for men, women, and juniors until 1994 – just ahead of when professional cyclists first entered the Olympic fray in Atlanta, in 1996. After that, the TTT was replaced by individual time trials. Unfortunately, the popular team event faded away at that time, because without an Olympic sanction there was no need for national cycling programs to put any investment into the event. But the popularity of professional TTT stages in the Grand Tours remained, and hence the UCI decided to bring the event back in 2012, as a trade team challenge – adding an exciting spectacle to the World Championships and creating a competition the fans could rally behind.

The UCI responded to the AIGCP press release on August 11th by essentially calling the teams’ bluff, and simply asserting that all of the WorldTour teams should be in attendance. This casual response by the UCI smacked of a parent scolding a child. It would be one thing if it were just team owners and administrators having a disagreement in private. But the teams have a legitimate gripe here, and their suggested revolt is reflective of more than just the format of the World Championships. Instead, it is a counterpunch against the future WorldTour calendar expectations, and the seeming trend towards one-sided UCI decision-making. Recent WorldTour changes include the calendar’s expansion by a phenomenal ten additional races (in all corners of the globe), and the establishment of minimum team participation expectations across the board. The result is that most teams, which may have already planned out and solidified 2017 and 2018 budgets with their sponsors, will have to revise their plans and go back to the well to ask for additional funds. In some cases, they may be asking for money which is simply not available.

Worse yet, and reflective of the general sponsorship challenges which we have previously discussed, several teams are coming to the end of sponsorship agreements, and may have a tougher time replacing or extending those sponsors. In short, the costs of running a team just went up – without a vote and without much discussion or warning.

Fewer big sponsors will be willing to undertake the general risks inherent in the sport if it gets more expensive, or else they will demand higher and/or more predictable returns on their investment. The crown jewel for all sponsors is still a starting spot in the Tour de France, but for every one of the current 18 teams which already have a guaranteed slot afforded by their WorldTour license, there is at least one more, fighting tooth and nail to get there – i.e., the 24 Pro Continental teams nominally eligible for a Grand Tour invitation. Sponsors are well aware that without a starting spot in Le Tour, their pro cycling marketing dollars sometimes might not amount to much more than charity.

The three-year WorldTour team license request, unceremoniously hacked down to two years in the ASO/UCI reforms dispute earlier this year, chipped away at the collective power of the teams to help determine the sport’s playing field. Given this shorter licensing period, and the expansion of the calendar, some teams will undoubtedly choose to be absent from those events they deem to have little effect on their sponsor’s exposure. All these additional costs bite into their overhead budgets, sometimes without corresponding benefit. In the longer term, these trends could discourage new sponsor investment and reinvestment, basically keeping the sport “small.”

The lack of participation guarantees, the increasing costs, and the huge disparities between big-budget teams like Sky versus the smaller teams like AG2R, all point to a more challenging future. As fans, we could also be worse off – potentially stuck with watching just a couple of teams with concentrated talent crush all the other teams, which can only afford the remaining riders. For many team owners, especially small teams which can’t afford to sign big stars, this might also help to drive them out of cycling altogether and make the whole sponsorship dilemma even worse.

Fortunately there are some potential solutions here, but they all require an open mind, a bit of creative thinking and collective negotiation. First would be the monetization of the World Championships TTT so that the event could actually underwrite its own costs, team participation included. The race production contractor and the UCI would need to structure the broadcast rights for the same premiums as the road race for sponsorship placements, broadcast feed licenses, and perhaps even the sale of a naming right for the event (since it is outside of the national team structure of the other road races).

In a larger sense, the sport should also think of a global and equitable solution to the logistics and expense question. Other international sports like Formula 1 figured out a long time ago that the only way to guarantee participation by all of its teams was to forge a partnership with a logistics agent (DHL, in Formula 1’s case) which could dependably and cost-effectively transport the materiel required for every race. Rather than fight over who pays for whom to show up, maybe it is time to negotiate a global partnership with a global transportation company, from which all teams and all race organizers could benefit. Perhaps this could even be pro cycling’s first universal named or presenting sponsorship.

Yet, we all know that these things may be too much to expect. Cycling still labors under a generally feudal management structure, it is still fractious to a fault, and it often seems unable to come to terms with the most basic of conflicts. The UCI is still in open conflict with ASO, and ASO is focused on trying to squeeze out its competition – in short, the overall sport is losing.

There may not be much of a World Team Time Trial Championship to watch in 2016 if the AIGCP is genuinely committed to sticking with the boycott – and we encourage them to follow through with it. But we further encourage all stakeholders to use this moment to reflect on what it will really take to make the new WorldTour schedule cost-efficient, how to ensure full team participation and how to encourage new sponsorship investment interest. The concept of how to exploit a certain level of scarcity value to improve the sport must also be taken into account. The AIGCP and UCI must accomplish more than a stare-down this time, leading to at least some direct and open discussion of the matter. The alternative is the continued dilution of the sport across a larger calendar, with higher overall costs for participation, and no net gain in visibility, popularity or sustainability of the sport.

The UCI is under pressure on many fronts, but continuing a trend of unilateral oversight – as shown by its apparent intransigence over the upcoming TTT – will not lead to the kinds of changes which can truly benefit the sport. If the UCI and ASO don’t eventually come to terms, and if the teams are not allowed to play an effective role in managing the sport’s direction, we may find ourselves perpetually stuck at the starting line of a race that leads only to the Tour de France. In turn, this will short-change the sponsors, teams, athletes and all the fans who love bicycle racing and want to see the sport realize its full global potential.