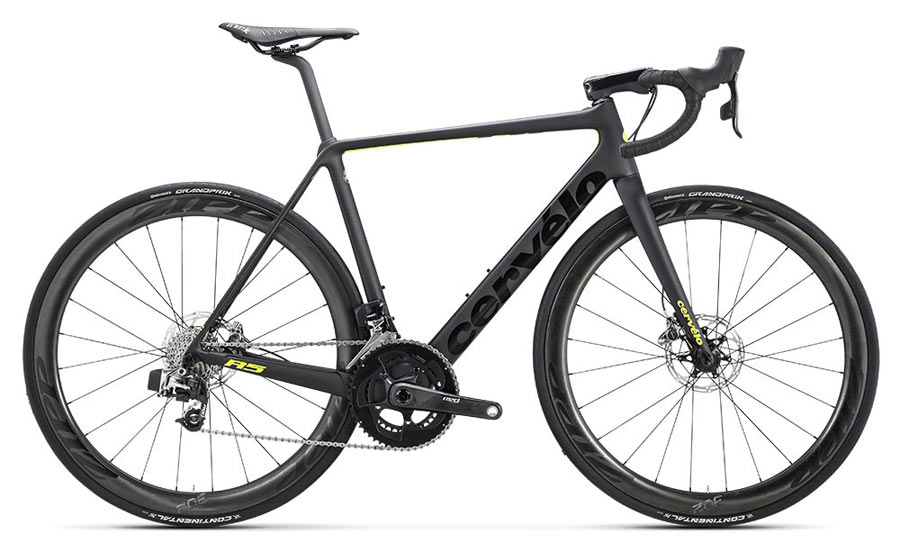 After nigh on to three years of testing alongside riders from the Dimension Data pro team, Cervelo has unveiled new versions of its popular R3 and R5 road frames, touting new tube shapes and profiles that have resulted in lighter, stiffer versions over their predecessors, along with disc brake and thru-axle options for both models.

In addition to reworking their Squoval Max tube shapes, Cervelo has also tweaked the geometry of the R5 to make it a more race-inspired platfrom, wherein the stack height of the headtube has been lowered 8mm.

Cervelo claims this changed in headtube design, combined with a new two-piece integrated bar and stem, along with revised profiles for the fork and seatpost, has resulted in a 44g reduction in drag for the new R5.

Other features that punctuate the R5, include both a significantly stiffer headtube and bottom bracket, which Cervelo says correlates into a 21% stiffer front-end and 15% stiffer bottom bracket area for the caliper brake version, and 18%/26% respectively for the disc brake variant.

In addition, the overall proportions of the bottom bracket have been significantly lowered by a massive 72mm, giving the R5 what Cervelo says is a lower center of gravity for improved handling.

On the other hand, the R3 retains its original geometry, offering the rest of us cycling mortals with a less aggressive option.

However, Cervelo says its newest version is 10% lighter than the out-going caliper brake model, while the disc version is a claimed 16% lighter. And, despite not having the “aero cockpit” of the R5, changes in the new R3 have yielded a 17% reduction in drag.

According to Cervelo, the R5 will be available with either SRAM eTap and Zipp 302 wheels, or Dura-Ace Di2 with ENVE 4.3 wheels for $9,000, while the R3 will be offered with Dura-Ace 9100 and Mavic Aksium Elite wheels for $5,000, with pricing and specs for the disc brake version to be announced.