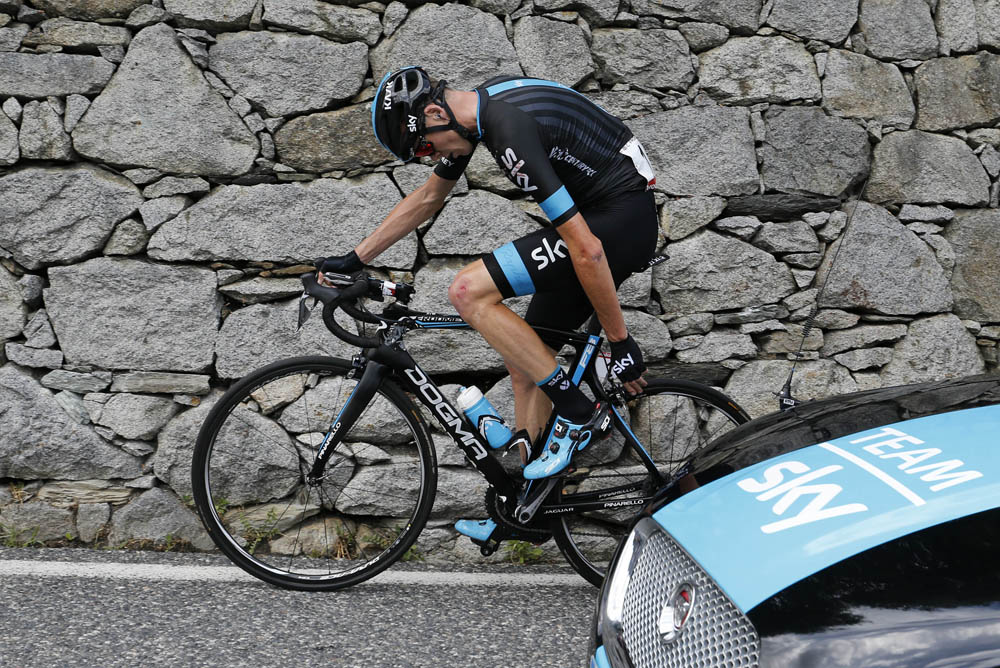 Chris Froome (Team Sky) has been forced to abandon the Vuelta a Espana after it was discovered this morning that he had fractured his foot during yesterday’s stage 11.

Froome was hoping to become only the third rider in history to back up a win at the Tour de France with victory at the Vuelta. However, a crash early on in yesterday’s grueling stage to Cortals d’Encamp in Andorra, brought the curtains down on those hopes..

The Team Sky rider managed to complete the stage, limping across the finish several minutes down on his general classification rivals, before being taken to a hospital for an MRI, which  confirmed a fracture of the navicular bone.

In a team statement, Froome said: “I’m really gutted to be leaving the race but the injuries that I sustained on yesterday’s stage were too much to continue.

“I hit my right side heavily and the main impact went on my right foot. I was desperate to dig in and finish the stage and my team-mates did brilliantly to get me through it, but as soon as I got off the bike I couldn’t put any weight on my right side.

“An MRI scan has shown that I have fractured navicular bone in my right foot, so now I’ll work with our medical team on making a full recovery.

“This is a great group of guys and I would love to have fought on with them until the end. I wish them all the best with the remainder of the race and I’ll be cheering them on from home.

“I’d also like to thank the fans for all their support and get well messages. I’ll be back soon!”

Froome had been around one minute off the lead of the race at the time of the crash.

Team Sky Doctor Inigo Sarriegui added: “Chris came off the bike right at the start of the stage yesterday. He went into the wall and developed pain after the first climb in his right foot. He couldn’t put any pressure on it so he was basically cycling just with his left.

“After the stage we did some examinations which revealed he was very tender on his right foot around the navicular area. He had an x-ray which didn’t show up a fracture, but because he still couldn’t weight-bear we proceeded onto an MRI this morning which confirmed there was a fracture.

“Chris will go home today and the next step will be to get a specialist opinion on further treatment.”