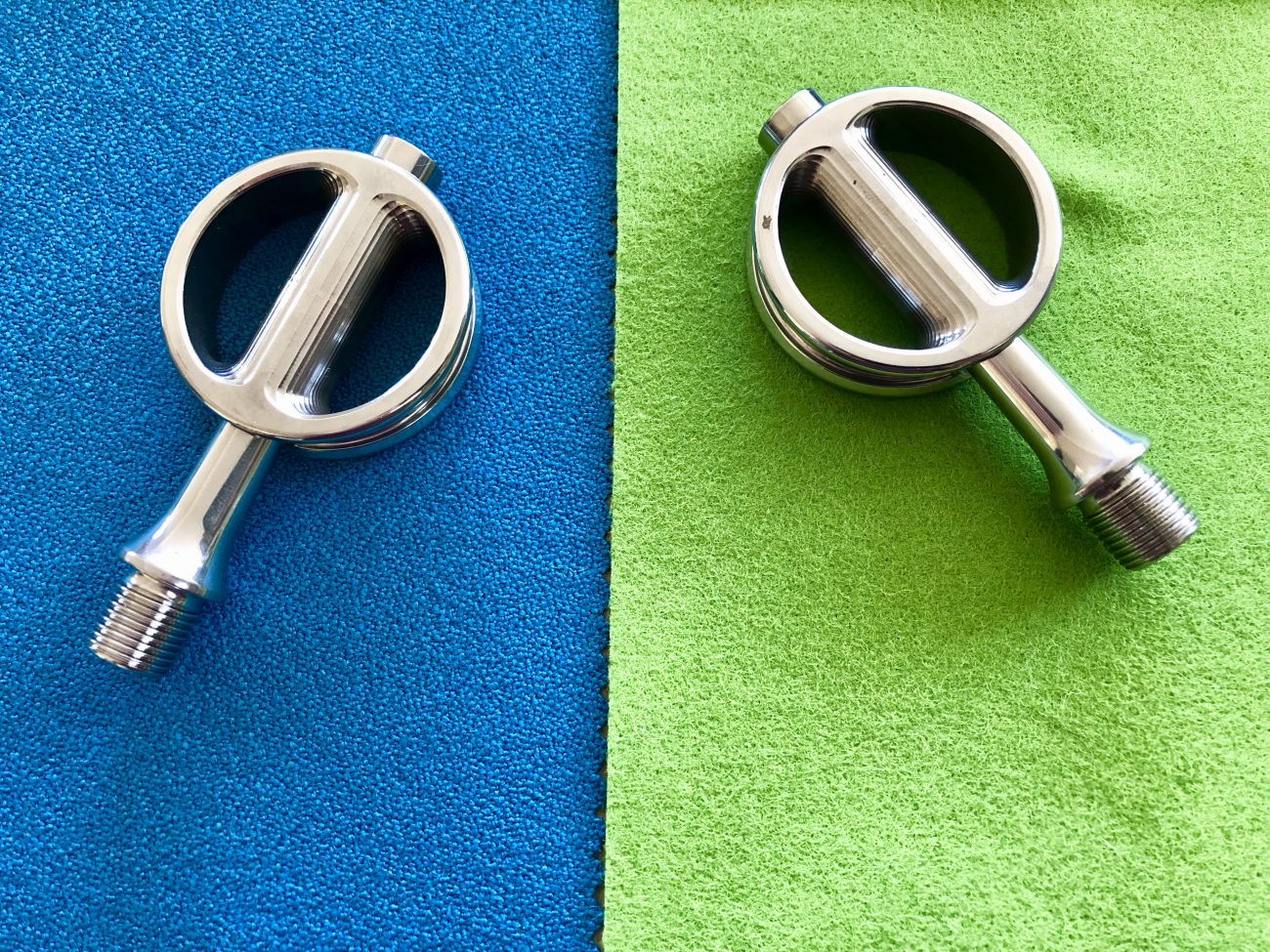 Once upon a time, I rode a set of pedals that resembled large lollipops. I recall admiring them for their simple, clean design and ample platform, which represented a nice departure from the otherwise clunky, bowling ball nature of most pedal systems back then.

Around the same time, there was a similar minimalist pedal being offered by a company called Coombe that was shaped like a cut-away cross.

By comparison, the Coombe possessed a much more elegant and artisanal design than its rival. However, they were far more expensive and somewhat elusive, which kept them outside of my grasp at the time.

Then, years later, before I had a chance to buy a pair, I found out that Coombe discontinued making the pedals after most road shoe manufacturers went exclusively to the 3 bolt cleat mounting pattern, which Coombe’s two bolt cleat design was not directly compatible with.

Well, I’m pleased to say that the Coombe brand has truly reemerged, not only offering a revised version of their original pedal, but a new model called the Millennium Pro, which I recently had the chance to review.

As you can glean from the images, the pedal boasts an altogether new design, featuring relatively large diameter “ring shaped” pedal bodies, a triple-row stainless steel bearing design, and an innovative cleat system that upholds Coombe’s inimitable attention to detail.

Here’s some technical information from Coombe to digest …

COOMBE MILLENNIUM PRO pedals are fast and easy to engage by simply pressing straight down on either side of the dual sided pedal body.

The cleats are a two piece design consisting of a high strength, light weight, carbon fiber reinforced cleat insert that securely retains the walking/retention pad to the sole.

The cleat pad is made of a resilient grade of high tech Dupont Hytrel polymer, which is wear resistant, non-slip, aerodynamically shaped and easier to walk on than other road pedal cleat designs.

The cleat pads incorporate front and rear inwardly projecting tongues which securely snap into engagement with the rims on the pedal body.

The cleat inserts are right and left handed, providing either 3 degrees of float to the inside or to the outside from center, depending upon which shoe they are installed on.

The “Competition” cleat pads work well for most competitive cyclists. But, more resilient “Commuter” pads are also available. These pads are the easiest to engage and disengage, making them ideal for commuting around town. They also work well for Junior cyclists and light weight riders, weighing under about 120 pounds or less, as well as elderly and physically challenged cyclists who may have difficulty engaging or releasing from other pedal systems.

Built to last a lifetime, COOMBE MILLENNIUM PRO pedals incorporate dual rows of full complement drawn cup needle roller bearings, having a load rating of 900+ pounds each, in conjunction with an outer row of ball bearings.

The dual rows of roller bearings are located side by side, beneath the ball of the foot, to enable these bearings to carry the entire radial load applied by the cyclist, such that the outer row of ball bearings only carry the relatively low, side to side, thrust loads, thus providing balanced loads on the bearings.

The patented design is extremely compact, yet provides low friction and maximum durability, with more than double the load carrying capacity of most other pedals systems on the market today.

After a protracted winter, followed by yet another non-existent spring here in New England this season, I was finally able to get out on the Coombe pedals and log-in a few hundred miles.

At 248 grams, the Millennium Pro pedals won’t win any plaudits from the weight weenies crowd, giving off a sense of heft when first held in one’s hand. But, this is to be expected from a pedal that’s machined entirely out of stainless steel.

In any case, the look and feel of the Millennium Pro is nothing short of exquisite, possessing an aesthetic that blurs the lines between ornate and industrial, thereby giving the pedals one foot in the traditional steel frame segment and the other in the arena of modern-day bikes.

Personally, I could really see these pedals being a big hit with the independent, artisan framebuilder, enhancing the bespoke nature of their custom bikes with a pedal that is sure to always look elegant. Something that can’t always be said of other pedals.

One thing that I would like to see however, is the option of a more subdued finish, say an anodized black in order to match up better with some of the current matte/raw carbon frames on the market.

Being an inveterate roadie, the word “commuter” is almost a swear-word in my lexicon of cycling terms, so I immediately opted for the “Competition” cleats.

Cleat set-up and alignment was accomplished with ease. Coombe also provides small shims that insert into the bottom of the cleat in the event the curvature of the sole makes for an uneven platform. Moreover, 3mm spacers are also supplied to adjust the axle spacing for cyclists needing a wider Q-factor.

The Millennium Pros have a low stack height of only 11.5mm, which is a few mm’s lower than my previous pedal system, so I lowered my saddle by about 4mm.

Once the cleats were in place, a stationary check of engagement and disengagement of the dual-sided pedal bodies proved to be a cinch, being very easy to locate and requiring little effort to get in and out. Something that I was initially told might be a little tricky when first using the Millennium Pro pedals. Furthermore, they proved to feel very natural to walk on, more “walkable” than Speedplay’s even, and so far show very minimal signs of wear.

Out on the Road

The first thing that I noticed was how smooth and quiet the Millennium Pro pedals were, something that remained unchanged during my review.

But, more importantly was the sense of having a very solid interface between cleat and pedal under my shoes, which translated into excellent power transfer and stability throughout my pedal stroke. Moreover, given the pedal’s minimalist design, there was never a sense of “hotspots” or fatigue, which I attribute to both the size and materials used in the cleats.

In conclusion, the $389.00 Millennium Pro is an interesting pedal to put a finger on. As mentioned, given their sculpted stainless steel design there’s almost something baroque about their appearance, yet they also portray a sense of machine age as well.

One thing that isn’t in question, is how well they perform, remaining exceptionally quiet while transferring power very well.