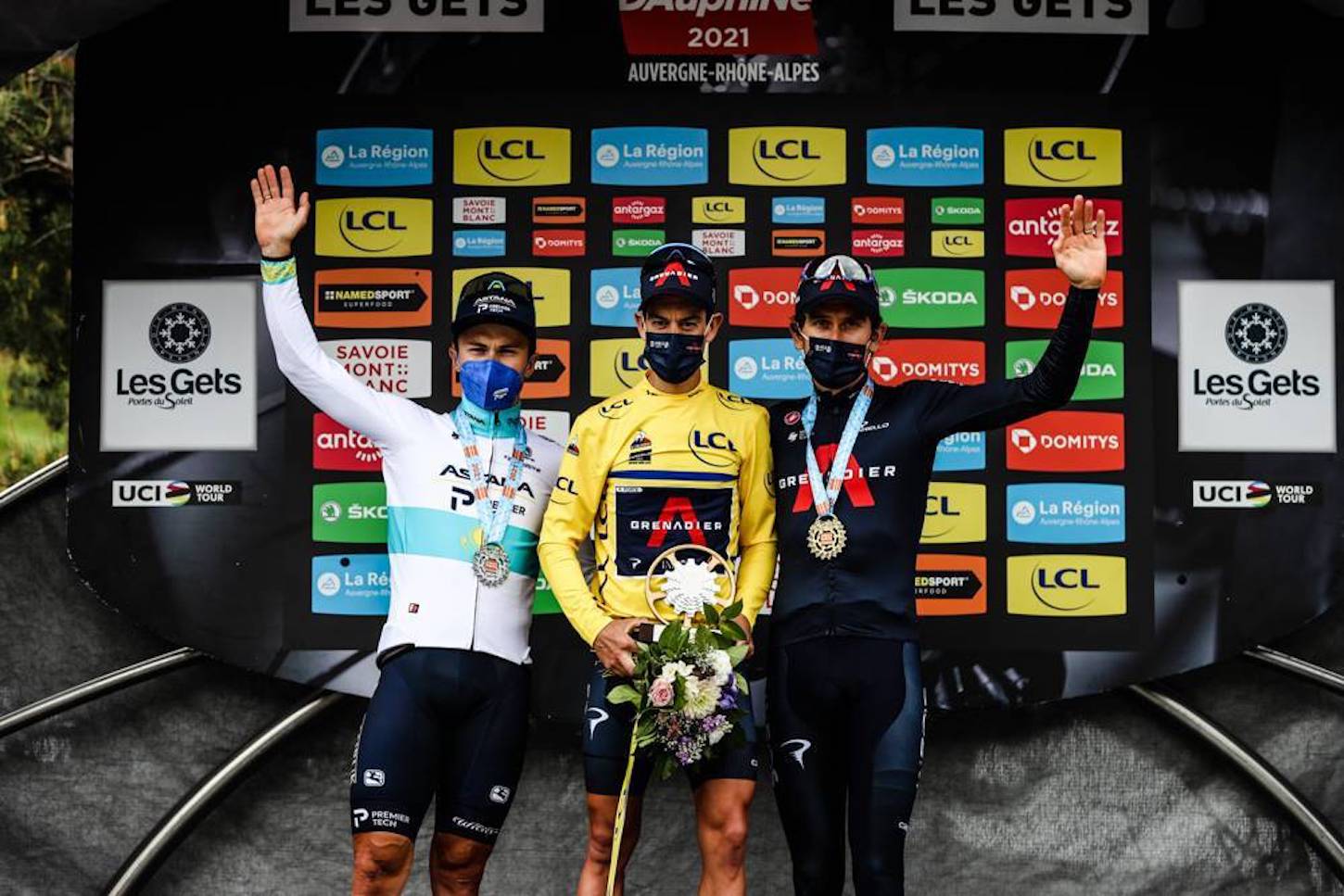 Richie Porte held on to seal the overall victory in the Critérium du Dauphiné today, while Mark Padun (Bahrain Victorious) made it back-to-back victories after claiming the 8th and final stage in Les Gets – his second win in as many days.

Porte had assumed the leader’s yellow jersey on Stage 7, and held a 17-second advantage over Alexey Lutsenko ahead of today’s final stage. And despite a late spill involving Geraint Thomas, Ineos produced a typically resolute defensive ride to protect the Australian’s advantage.

The Australian rider rolled over the line some 2’10” in arrears of 24-year-old Padun, who also collected also collected king of the mountains polka-dot jersey.

Porte was rarely troubled during a stage that included six categorized climbs, fending off attacks with ease when they did come towards the end of the 147km ride.

However, it was not an effort without drama, with Thomas losing control on the descent of the hors catégorie Col de Joux Plane. But, the Welshman got back on terms to help Porte make it safely to the finish, keeping the yellow jersey on his back.

From there, the breakaway group went on to establish an advantage of 3:45 over the peloton.

However, as soon as the escapees reached the first slopes of the Joux Plane, Padun accelerated, with Martin and Konrad briefly following him. Ben Hermans (Israel Start-Up Nation) and Nairo Quintana (Arkea-Samsic) attempted to go clear of the yellow jersey group in pursuit of the leaders, only to be reeled back in by the Ineos train.

Jumbo-Visma’s Steven Kruijswijk was the next to try his luck, his teammate Sepp Kuss slipping out of the back of the group at almost the same time. Meanwhile, Movistar’s tactic of putting two riders in the break paid off as Erviti and Arcas dropped back to the yellow jersey group and started setting the pace, their pace reeling in Kruijswijk and slimming down the group.

When Erviti, Arcas and then Carlos Verona pulled aside, Ineos took over once again, no doubt expecting an attack from one of the Movistar leaders. It came from Miguel Ángel López, but the Colombian too was brought to heel by the Tao Geoghegan Hart-led yellow jersey group. Bahrain’s Jack Haig then chose that moment to attack and was the first of the GC contenders over the Joux Plane, his rivals just a handful of seconds behind.

Although Padun lost time on the descent to Morzine and the 5km climb up to Les Gets, his victory was never in doubt. He had enough of a gap to devote most of the last kilometer to his celebrations.

Haig was later caught on the descent off the Joux Plane, then Thomas lost his front wheel on a hairpin and slid to the deck. Though his shorts were ripped, he regained contact with the group on the climb to Les Gets.

While Thomas recouped the lost ground, there were several attacks on Porte, Astana duo Ion Izagirre and Lutsenko the source of most of them.

Just as Thomas rejoined, Ben O’Connor (AG2R Citroën) jumped away, the Australian rider seeking to move up a spot or two in the overall classification.

Meanwhile, Thomas powered through to the front of the yellow jersey group, his tempo preventing further attempts to unseat Porte right until the end.