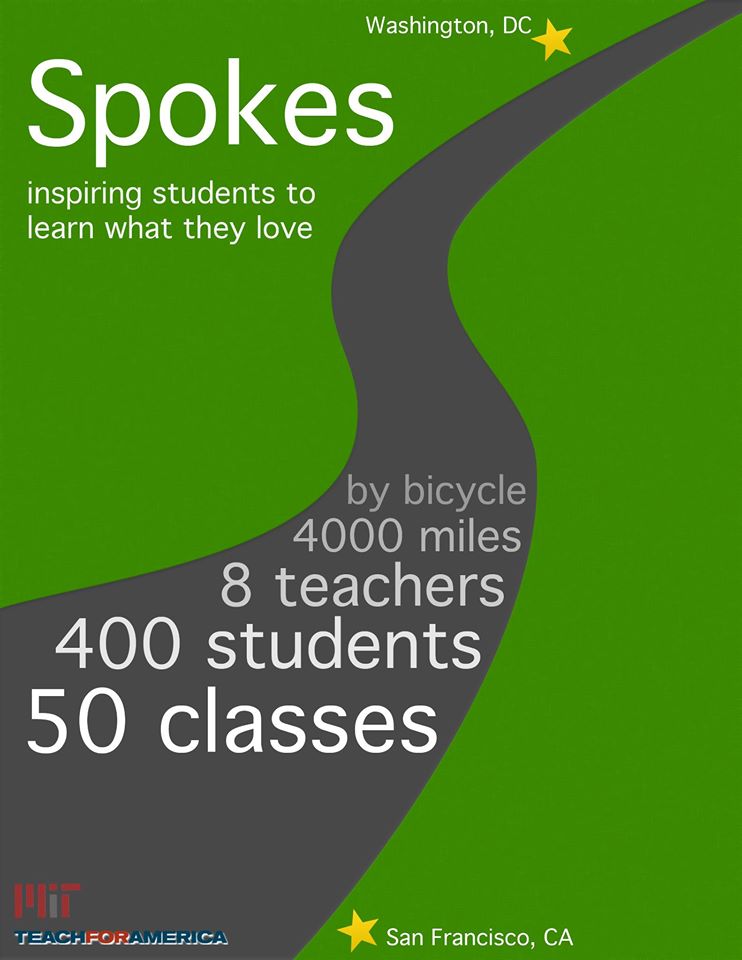 A cycling cause backed by seven students from Harvard and MIT, are cycling across America, stopping in many rural towns to get kids interested in science through hands-on workshops to program computers, launch model rockets and build robots.

The students hope to inspire the next generation of scientists and use the workshops — they call them “learning festivals” — to brush off dusty stereotypes.

“We’re trying to break as many of the stereotypes as possible. For science, you think of people in lab coats with gray hair,” said group member Drew Bent, a freshman studying physics and electrical engineering at MIT. “We’re coming into the festivals with bikes. We want to show that engineering can be glamorous, and that a lot of us are athletes.”

The project is called Spokes, a collaboration that started in 2013 when a group of students from different colleges embarked on a trip that was part endurance challenge, road trip and teaching experience. Since then, each year’s members have recruited the next year’s group. This year, students left from Washington, D.C., on June 1 and will finish in California in August, with plans to host a dozen workshops along the way at schools and libraries.

After finishing their ride in Sausalito, California, the group will head back home, but they’ll stay connected to some of the students they meet. For the first time, the group is awarding 10 grants of $1,000 to pay for student inventions that solve real-world problems. Along with the money, grant winners will be paired with Harvard and MIT students to serve as mentors.

“We want to get students excited about engineering,” Bent said, “but the real question is, ‘How can we sustain this excitement after we leave?’

At the workshops, Spokes members invite students from grades 6 to 12 to tackle experiments that pack lessons in engineering and computer science. Participants study aerodynamics and then blast gunpowder-fueled model rockets hundreds of feet skyward. They learn about electrical circuits and then assemble simple motorized robots.

The goal is to give students memorable lessons that get them thinking about careers in science and math.

“We can’t teach them programming in a day, but we can get them excited about programming,” Bent said.

On a route that spans 4,000 miles, the group typically skips big cities in favor of rural towns. They target areas where schools might not have the resources for flashy experiments, and where careers in science aren’t always visible. The first workshop is planned for June 12 in Hazard, Kentucky, with a population of 5,400.

“A lot of these communities are hard to reach and aren’t along the beaten path,” said Simon Shuham, a Harvard sophomore. In contrast, he added, many students at Harvard had the benefit of strong science programs back home.

All of the students in Spokes are studying science fields, but they come from a range of backgrounds. One is from Iran and another from Chile. Two are women. All share an interest in teaching and got help crafting their lessons from Teach for America, a national group that places teachers in rural and inner-city areas.

As a tuneup for the tour, the group hosted a workshop in May with seventh- and eighth-grade students at the Grammar School in Putney, Vermont — a 115-student school one of the Spokes members attended.

Seventh-grader Ethan Cameron was part of a class that learned the basics of computer programming. He and other students shouted verbal computer commands to move a Spokes member from his helmet to his bicycle, and then used code to create computer animations.

“I’m not the most interested in computers, but it makes me want to learn more about computers work and how things are programmed,” Cameron said later.

The workshop challenged students, but they embraced the lessons, said Paul Hopkins, a science teacher at the school.

“I think that if you give kids the chance to learn hands-on with these kinds of things, then they’re always going to be eager learners,” he said.