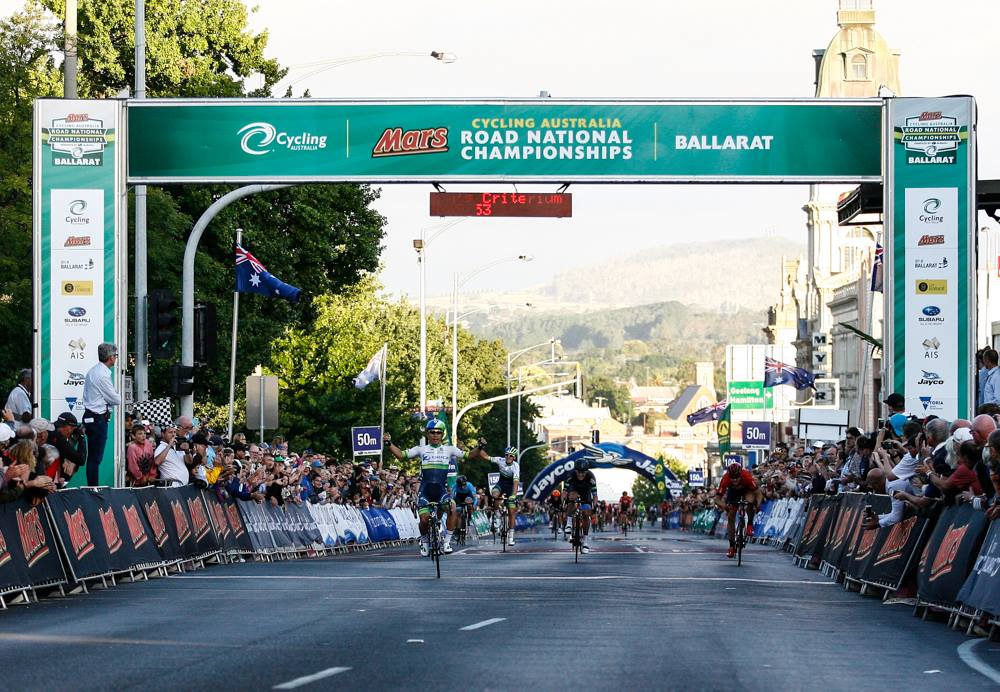 In a race controlled by the Orica-GreenEDGE train, Caleb Ewan (NSW) has capped off the hard work of his teammates to win the 2016 Mars Cycling Australia Road National Championships Criterium.

The Avanti IsoWhey Sports Cycling Team and Drapac Professional Racing squads were determined not to let their World Tour rivals have it all their own way, launching multiple two-pronged attacks throughout the hour long criterium in a bid to disrupt the GreenEDGE juggernaut.

Samuel Spokes (NSW) and Robbie Hucker (Vic) threatened to steal the show, launching a break that held the peloton at bay for a number of laps, and stretched to over 10 seconds at times.

Lead by veteran Luke Durbridge, the Orica-GreenEDGE team never panicked, and began to reel in the escapees as the laps remaining counted down.

In the final lap, Ewan was marshalled by his new teammate Alexander Edmondson (SA) who provided the perfect lead out for the pocket rocket to claim his maiden senior championship.

“It was actually a big relief. I came to this race really, really nervous and I knew I had some good wins already in the Bay Crits so I was clearly the favourite for today. Obviously there’s a fair bit of pressure going into the race as favourite.”

“I can’t fault the team at all, they rode perfectly and again they just gave me such an easy ride out there and that’s what makes the difference in the end.”

“It’s pretty nice to get the gold one finally, well not finally only after one season, but it feels really good and I’m an elite national champion and that’s something nice to have on your palmares. I’m still looking forward to the road race, that’s the big one that you really want to win so hopefully I go well there as well.”

As well as gold in tonight’s criterium, Ewan also won three stages on his way to claiming the yellow jersey at the 2016 Mitchelton Bay Cycling Classic, showing he is in fine form heading into the men’s road race on Super Sunday.

“Obviously I’d like to win (Sunday) but we’ll see how the race plays out. It makes a massive difference I think with the wind as well, which way that blows, because if it’s a tailwind up the climb it’s probably going to be too hard for me so I’m hoping for a headwind” concluded Ewan.

A decision to take up cycling as a hobby on the advice of a friend four years ago has paid dividends for unheralded Wagga cyclist Sophie Mackay as she claimed the biggest win of her career in Ballarat today – the national criterium title.

“When I realised I had won, it was more disbelief to tell you the truth,” said Mackay whose previous career bests came in 2013 when she claimed the NSW road race crown and finished second in the criterium. “Being able to wear the national champions jersey is an amazing feeling. Now I guess I will have a name to live up to so I better lift my game.”

After a relaxed start to the opening laps, the action picked up ahead of the first sprint with Kitchen launching a concerted effort to take maximum points in the sprint.

From here on it was on in earnest with attack after attack forcing the pace with riders being dropped off the back. Reigning road champion Peta Mullens (VIC) and Amanda Spratt (NSW) countered the acceleration of Kitchen.

With attacks continuing the lead was constantly changing with Australian Orica-AIS the main protagonists. Rachel Neylan (NSW) was the first rider to achieve a significant gap. Reaching close to 15 seconds at the half way point of the race.

Sensing the danger it was Mullens who again took to the front and despite several false starts in the chase the gap quickly fell and a strong group formed. Williams, Kitchen, Mackay, Chloe McConville (VIC), Ruth Corset (QLD), Miranda Griffiths (VIC) and Minda Murray (VIC) presented a dangerous move with Sarah Roy (NSW) bridging across.

Despite attempts to bring it back the move was able to hold on to contest the finish.

“It is a long sprint, uphill is tough. Felt like I had to hang in there, tried to have a good position heading into the last corner, and I think I was third or second last which wasn’t ideal,” said Mackay.

“But I just tapped onto someone’s wheel and from 250m to go, I could see Lizzie and Sarah in front and I was thinking hunt them down, hunt them down. I was just hoping really,” said Mackay who had an emotional phone call with her mother ahead of the podium as she wasn’t able to attend the race in person.

“My mum, in Wagga, who had a few choice words to say when she found out I had won because she was fairly disappointed she wasn’t here to see it.

I don’t think I will sleep very well at all tonight. There will be lots of phone calls, lots of hugs and hopefully I might be able to have a celebratory beer!”

In the battle for the first ever under 23 women’s green and gold jersey Jessica Mundy (SA) emerged victorious in a close finish narrowly beating defending champion Shannon Malseed (VIC) and Tayla Evans (VIC) in the sprint.

“I’ve never been able to get on the top step so a special moment today,” said Mundy on her first national title on the road.

The achievement was made even more special as Mundy became the first under 23 women to pull on the green and gold jersey. “Being able to wear the jersey makes you feel extra special, it’s a great moment when you put it on and have the Australian green and gold bands around you.”

The women’s field now turns their attention to the individual time trials in Bunninyong on Thursday January 7th.