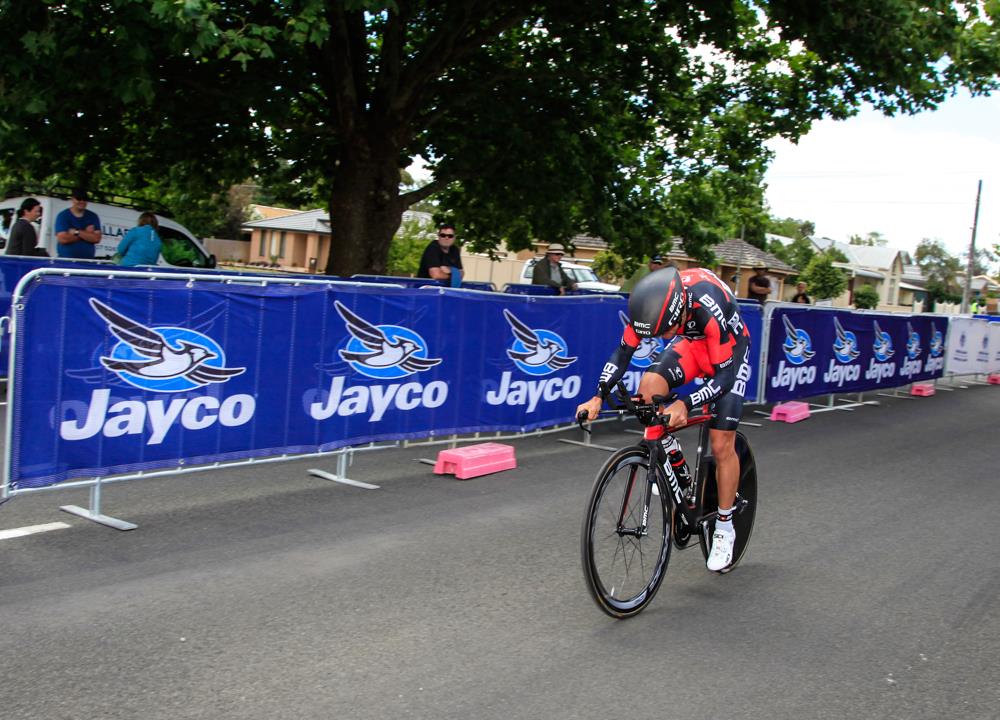 07 Jan 2016
By Campionissimo - In LATEST ARTICLES, THE GREAT RACE

It was fourth time lucky for Dennis, who was ecstatic to finally take the top step in his pet event.

“It’s always a dream to win the Aussie nationals. I’ve won under 23s and now I’ve got a senior medal and to be able to wear the green and gold in every time trial this year is a true honour. Obviously Sunday is still to come and there’s still another jersey so we can’t celebrate tonight but we can have a little bit of a celebration and say job well done for Thursday.”

“I put a lot of pressure on myself to be the best at whatever I aim to be at. Rio is my big goal this year, the time trial, then there’s the Qatar World Championships time trial as well, and I’m looking at heading more towards the general classification side of things after Rio,” said Dennis.

“Sunday (elite men’s road race) is going to be a bit of a numbers game to be honest with Orica-GreenEDGE as always. They’ve got a lot of strong riders but we’ve got Richie and I. It’s a lot like Cadel and I, but Richie and I are strong, we’re one/two in the time trial and I’m sure we can play a good card and hopefully take another green and gold.

While disappointed to lose his time trial crown, Richie Porte was happy that the national champions jersey will be on the shoulders of his 2016 teammate.

“Today has been more then what I’ve expected to be honest. It was a bit more of a relaxed start to the year. I’m happy to be on the podium and I’m not surprised that Rohan has taken this win, he deserves it, he’s hungry and I know how much he’s wanted that national jersey.”

“Last year I think he (Rohan) got his pacing strategy a little bit wrong and we’re team mates now so I’m thrilled to see him get a win and properly pace himself this year” added Porte.

Competing in only the fourth time trial of his cycling career, Sean Lake was ecstatic with his bronze medal.

“I’m absolutely stoked. There was a dream and a plan going into the event and it just came together perfectly for me and that’s all I was hoping for today. I’m absolutely honoured to be on the podium with those two guys (Dennis and Porte)” concluded Lake.

The elite men will next be in action on Super Sunday, when they take on Mt Buninyong in the 183km road race starting at 12pm.

An elated Garfoot covered the 29.3 kilometer course in Buninyong in 43mins 16secs to win by a comfortable margin of 46 seconds over four-time and defending champion Shara Gillow (QLD-44:02.49) and Tiffany Cromwell (SA-44:54.10).

“It feels really good, one thing off the bucket list, it feels amazing,” Garfoot said of pulling on the green and gold national champions jersey for the first time.

“It was very exciting, it was a lot of pressure for some reason, more than the world championships it felt. I gave it my all, I was really suffering out there and I was dizzy before the line, it was a real fight I thought.”

Garfoot, who had a standout 2015 season including finishing fourth at the UCI World Championships, was the fourth last of 25 riders to start the 29.3 kilometer test in Buninyong.

Cromwell set the early fastest time at the intermediate checkpoint of 21mins 36sec before the time was beaten by Garfoot in 20mins 51secs.

“My plan was to settle in within the first 2 kilometres. It didn’t happen the way I wanted it, I was just too nervous. I went out way too hard and I had to force myself to pull back.

“I just kept telling myself to slow down, slow down. Because I went out hard I was really fighting on the way back but I think it played off.”

The second half of the race went much like the first with Garfoot extending her advantage to cross the line in 43mins 16secs. Garfoot will continue to chase selection for the Rio 2016 Olympic Games after another strong performance in the disciple.

“It is preparation to Rio but its not actually a selection race per say because there’s not international competition here. So it feels good to know that on this date you’re the best in Australia.

“It might give me some confidence, but its not the international field so will have to keep on fighting for the selection,” added Garfoot.

Fellow Queenslander and silver medallist Shara Gillow was disappointed at not being able to take her fifth title.”I’m not happy with silver, I came for the gold, but but I guess it is a good start to the 2016 season and I am now looking towards the European races.

“2015 was a bit of a different year, with a new team in Rabobank, and I am really looking forward to the season with them, and focussing a little bit more on my individual time trial.”

Emily Roper claimed the first ever under 23 green and gold jersey after a late decision to compete. It is Roper’s fifth under 23 national title having won the both criterium and road race back to back in 2013 and 2014.

“I really only decided to come out here nine days ago and race. I’m pretty glad that I made this decision.”

“It’s pretty exciting for under 23 women to get our own jersey this year,” said Roper on the chance to wear the green and gold stripes. “To come out here and pull it off and get the first women’s under 23 time trial jersey is pretty exciting.

It was an all Queensland affair on the under 23 podium with Roper using her experience to cross the line in 46mins 45secs in the second half to hold off a fast finishing Ellen Skerritt (QLD-46:49.42) who would claim silver and former winner Jennelle Crooks (QLD-46:49.54).

“I didn’t do nationals last year. I went overseas in 2014 and I came home and had ten months off, I just needed a bit of a break.

“I tried some other sports, I did a bit of running and swimming and just took some time off and started to enjoy the sport again. Now I’m back and having fun and having fun racing my bike.”

Attention now turns to the road race on the new ‘Super Sunday’ with another Australian title up for grabs. “Its exciting because its on Sunday, hopefully we get a lot of people watching and a lot of pressure from the spectators. I hope we get media coverage and it should hopefully give me a better feel to be racing.”