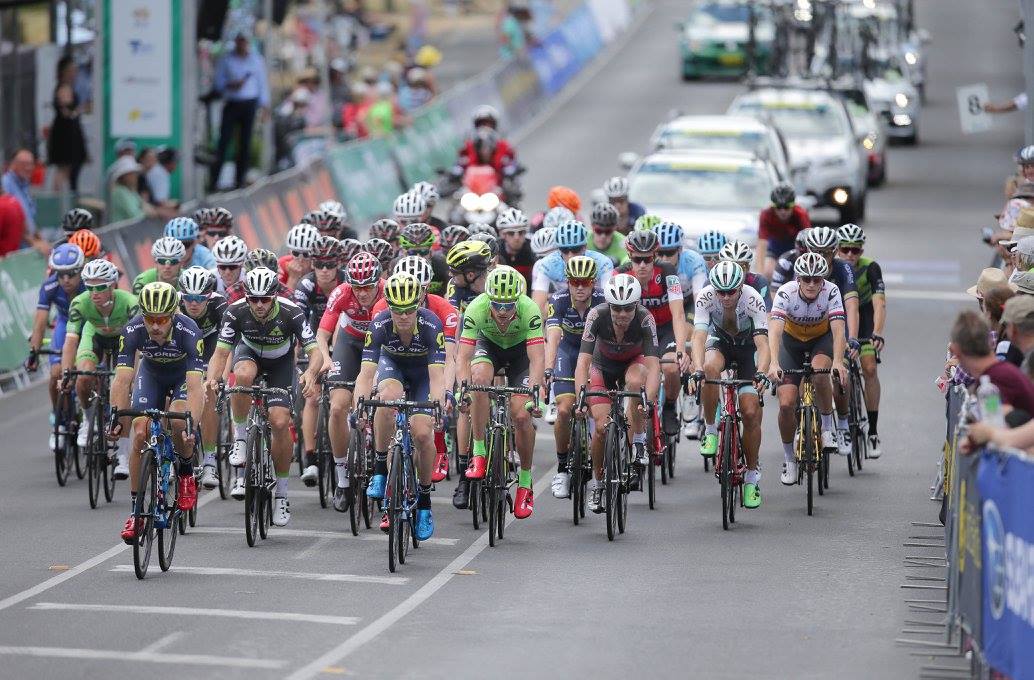 In the first week of his professional career BMC Racing Team’s Miles Scotson (SA) stole a late charge on a select group to claim the green and gold jersey, in a thrilling finish at the 2017 MARS Cycling Australia Road National Championships in Buninyong.

With 15 riders together over the top of the final ascent of Mount Buninyong, the lead would change continuously as riders tried their luck to avoid a reduced bunch sprint.

It was 2015 under 23 champion Scotson, who narrowly missed selection for the Rio 2016 Olympic Games on the track, who took a flyer inside the final two kilometres. With Scotson in time trial mode and riders with no teammates left, they were forced to chase on their own to try and bring back the South Australian.

The chasers would miss out with Scotson having time to salute across the line. Two-time winner Simon Gerrans (VIC) won the sprint to claim silver with Nathan Haas (ACT) who finished fourth in 2016 rounding out the podium.

“I ran it through my head, I was like 18 hill repeats, I just haven’t done the climbing or efforts, really the k’s or I didn’t think,” said Scotson who is a multiple world champion on the track.

“I’ve only done one week over 20 hours since my break in October or November. I was just so surprised I got around today but I really just have good support here that the team arranged.”

“I eat and drank well all day, it paid off. I love this course too, I won an Australian title here in the under 23. It suits me and I just love the atmosphere of the climb and love everything about racing here.”

“It’s really weird just racing in the national champions jersey in Europe this year is going to be a big jump. Maybe a bit of pressure I’m not sure how this season is going to go whether I can handle it in Europe so its time to lift my game.”

“Now I’m going to stand out, its time to lift my game.”

A furious pace was set on the opening laps of the race with attacks flying as riders tried to establish an early break. Move after move went up the road only for riders to drop in and out as they bridged across or fell off the pace.

After building up a lead of nearly one minute with 11 laps remaining, time trial medallist Ben Dyball (NSW) put his strength against the clock in to action as he set off in pursuit. Making short work Dyball joined the break a lap later creating a nine-rider move.

The next five laps would see the break continue to work together holding the advantage at three minutes before an attack by Morton upset the cooperation and would begin the eventual end of the break.

The attacks thinned out the group over the next two and a half laps until only Meyer, Morton, Durbridge, Hucker and McCarthy remained. Lane and Dyball dragged themselves back during a lull in the pace.

Sensing the disunity in the break the peloton upped the pace quickly eating in to the advantage with Mathew Clark (VIC) leading the chase. As the field reached two laps to go the gap was inside 30 seconds and the catch made ahead of the penultimate ascent of the climb.

Brendan Canty (VIC) was the first to make his move with Durbridge, who had been out the front most of the day setting off in pursuit. As he approached the line with one lap to go it was clear Canty had mistimed his effort as he began to celebrate, before hearing the bell and immediately switching back in to race mode.

Durbridge would join him on the approach to the climb before the attacks again came from the peloton, with 2010 champion Travis Meyer (WA), in his final race the first to make contact.

Over the top of the climb it was Gerrans who made his move with McCarthy and Nathan Earle (TAS) in hot pursuit but a group of 15 quickly came together. A flurry of attacks followed, though Durbridge was quick to close everything down until the surge from the very back by Scotson set him up for glory.

“I was so glad I waited behind on that last lap and then whacked them and just round the gear out and tried to tuck low at 100%. When I got to the bottom of that hill, just seeing the gap I had I just couldn’t believe it,” Scotson explained.

“I was like wow, its really going to happen and then so many different feelings coming into the line I couldn’t believe it. I was dreaming about it yesterday but probably not going to make the finish today but still dreaming of being Australian champion and that’s why I think I had that mentality of all in.”

“I wasn’t racing for fifth or podium, I’ve done that before. I was fifth the other day in the time trial and satisfied but not super happy but now I am,” added a still elated Scotson.

“I know that you can carry your speed on that descent and I think I must have hit that downhill going ten kilometers an hour quicker and just tucked, kept the pace on and the gap went out without pedaling.”

“It really was just like it kind of suited me. I was still doing track midyear last year before like Rio and that track power paid off today.”

The 22-year-old was full of praise for everyone who has supported him over his career. “I had great support here from BMC, I want to thank them, my parents, the team, my long time coach before Tim Decker [Cycling Australia Senior Coach – Men’s Track Endurance].

“Just kind of today I feel like I really had that winning instinct at the end and he rammed that into me over years.”

Two time winner Simon Gerrans was full of praise for the young Scotson. “What a great way for him to get his professional career started.”

“I’m really happy for the young guy to get the win today, he really deserved it. He didn’t have any teammates so he raced a really smart race.”

Time trial champion Katrin Garfoot (QLD) became the first woman to do the time trial and road race double since Carla Ryan in 2009, as she sprinted to victory at the 2017 MARS Cycling Australia Road National Championships in Buninyong.

The Rio Olympian was part of a two rider break over the final two and a half laps with defending champion and Orica-Scott teammate Amanda Spratt (NSW) before showing her strength in the sprint that went down to the wire with a fast finishing Spratt just missing her third title.

One and a half minutes behind Lucy Kennedy (QLD) crossed the line to collect the bronze medal. While in the race for the under 23 national title it was Orica-Scott’s Alex Manly (SA) who added the road race to her time trial title from Thursday.

“It feels great. I’ve wanted to be here for a few years and I finally made it. It feels definitely great and a double as well which was also a dream coming into it.”

“It’s very special. It’s special because it’s such a rare thing to achieve this.”

“I was a bit scared because last year the last climb was really hard and I didn’t want them to make up much time. I was trying to keep the pressure down and Spratty was trying to hold me back a bit,” she added of the friendly rivalry between teammates for the gold.

“I think I was suffering the last three laps to be honest, not just the last lap but most of all the sprint.”

After a quiet opening lap Queensland trio Jennelle Crooks, Shara Gillow and Ellen Skerritt were the first to attack over the top of Mount Buninyong on lap two of 10, quickly building a one minute lead.

With the trio of time trialists working well together lead by experienced four-time national champion Gillow the gap grew to three and a quarter minutes, mid way through the next lap.

With Orica-Scott controlling the peloton the gap hovered between two and three minutes for the next three laps, before an increase in pace by Garfoot on lap six saw the peloton split up on the climb with the increased pace sending riders backwards.

The regrouping at the front was short lived with attacks coming almost immediately in what would prove to be the decisive move as Garfoot, Spratt and Kennedy upped the pace on the climb.

A further acceleration by Spratt saw her continue on solo before Garfoot was able to distance Kennedy leaving the Orica-Scott duo alone at the head of the race. Starting the final two laps Kennedy was fighting for bronze at 40 seconds while Corset, Crooks, Gillow, Malseed and Taylor were one minute and 17 seconds behind.

As the bell rung the race for gold was down to Spratt and Garfoot with Kennedy one minute 19 seconds behind and the chase group of five at two minutes.

Garfoot was first to open up her sprint catching Spratt on the back foot who unleashed her quick finish but was unable to come around Garfoot. One minute and 27 seconds behind Lucy Kennedy crossed the line to snare the bronze medal.

“I wanted it to be a hard race so the way to make it hard is go hard on the climb. If I went hard on the climb up the front means everyone has to suffer as well,” Garfoot said of her plan heading in to the race.

“Then following Shara’s [Gillow] break I tried to make some time out as well on the climb again. I always tried to reduce the time not just myself.”

“Before the race we knew we had to make the attack at about five laps to go, or four laps, five laps depending what’s happening.

The battle for the under 23 title was fought out in the main peloton seven minutes and 19 seconds behind with Manly taking the spoils, and finishing the elite race in 15th position. With mountain biker Emily Parkes (ACT) in silver and first year under 23 Jaime Gunning (QLD) in bronze.

“It is really good. I came here wanting to win both and I did so I’m really happy,” said Manly who claimed her third national title in the past month after the Madison in December and time trial on Thursday.

“I was aware where they were. It came down to the last sprint and they rode really well,” she added of her competition in the under 23 category. “They were really strong on the hills and had to wait for the sprint. I was confident.”

“I’m not really a sprinter but I have a track background so I was like maybe I can out sprint them. That was my strongest point out there because I definitely didn’t have them on the hills.”

“The motorbike came up to me and told me about it, really, really happy about that,” Manly explained of hearing the news of her Orica-Scott teammates going 1-2. “You can’t do better than a one, two. they really deserved that win. We all respect them so much.”