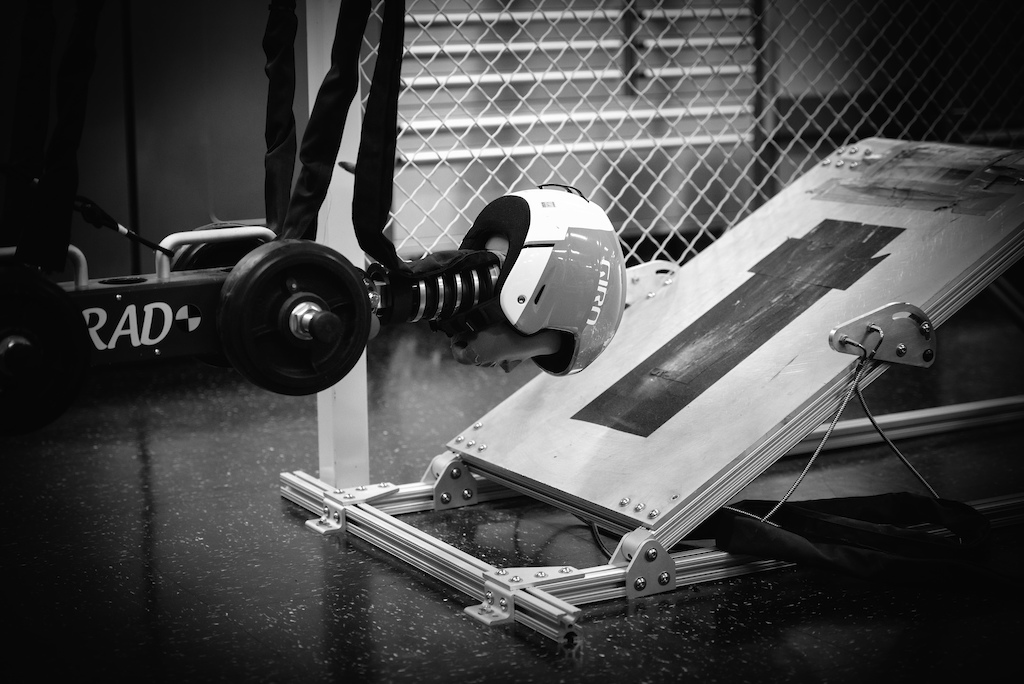 Have you ever wondered what safety standards helmet manufacturers are required to follow when it comes to protecting your noggin?

Here are the facts.

In other words, EN-1078 is a commonly recognized standard.

EN-1078 has a lower maximum G threshold than the CPSC, Snell B-95 or ASTM F 1952 cycling helmet standards. In other words, helmets that transmit more than 250 G’s to the headform during impact testing fails EN-1078. The other standards mentioned above allow for up to 300 G’s.

But all things aren’t equal because testing standards differ. To be specific, EN-1078 requires four hits per helmet, but those impacts are not as powerful. Furthermore, EN-1078 only requires impact tests on two of the three anvils demanded by the other standards: There’s no hemi anvil impact test here.

Comparing impact energy across various standards can be a challenge since some standards call for impact testing with a single headform weighing 5 kilograms and other standards, including EN-1078, require testing with several headforms of various weights (in this case, 3.1 to 6.1 kilograms).

More “apples to apples” comparison of impact energies can be achieved by holding headform weight constant at 5 kilograms and comparing the energy created at that weight, per a given standard’s drop-height requirements. In this case, that would mean EN-1078 impact energies are 73.5 Joules on the flat anvil and 53.9 Joules on the curbstone anvil—that’s about 25 joules less per impact on the flat anvil than required by the CPSC, Snell and ASTM standards.

But does it provide less protection?

Some observers suggest that EN-1078 doesn’t offer as much protection to consumers because the testing isn’t as demanding. On its face, the argument seems logical, but it’s also worth noting that the actual incidence of brain trauma following cycling accidents does not appear to be higher in countries where EN-1078 is the law of the land. In the world outside the test lab, the EN-1078 standard doesn’t appear to be lacking.

As with the United States’ CPSC standard, helmet brands are responsible for certifying that their helmets meet the EN-1078 standards. They can either self-certify or pay a third-party laboratory to provide testing and record keeping.

ASTM International is known as the American Society for Testing and Materials (ASTM), but has truly become an organization committed to developing international standards. The organization’s F 1447 bicycle helmet standard is the foundation of the CPSC standard in the United States. In F 1952, ASTM has developed a voluntary downhill mountain biking standard.

Downhill mountain biking inherently involves greater risk than other styles of mountain biking, considering the emphasis on jumping and more demanding terrain. ASTM F 1952 is geared to address those risks by demanding that passing helmets absorb greater impact energies over a larger portion of the helmet. Snell B-95 features greater impact energy on the flat anvil (110 joules versus ASTM’s 98), but ASTM F 1952 features slightly higher impact energies (6.5 more joules) on both the curbstone anvil* and hemi anvil*.

While the vast majority of downhill helmets are of the “full face” variety, meaning they feature a chin bar, F 1952 doesn’t actually require that passing helmets possess a chin bar. If, however, the manufacturer has equipped the helmet with a chin bar, that portion of the helmet must withstand an impact test (a 5-kilogram weight dropped on the chin bar from a height of .40 meters) without deflecting more than 60 millimeters.

As with the CPSC and EN-1078 standards, helmet brands are responsible for certifying that their helmets meet ASTM’s downhill standard. They can do this by either self-certifying the helmets or outsource to a third-party laboratory for testing and record keeping.

Since March 10th of 1999, all bicycle helmets sold in the United States have been required to pass the CPSC helmet standard. Prior to that point, several popular helmet standards (ANSI, ASTM and Snell) floated about, each with substantially different testing regimens. In the United States, helmet manufacturers could choose to meet any, all, or none of those standards

All of this proved confusing to consumers

Congress passed legislation in 1994 (the Children’s Bicycle Helmet Safety Act), calling for all cycling helmets to meet a single, national standard. Other cycling helmet standards still exist, but now U.S. consumers are guaranteed a common performance threshold with any bike helmet purchased in the United States.

The CPSC standard is largely based on the pre-existing ASTM 1447 standard (originally published in 1993). The primary difference between these two standards is that CPSC is mandatory, whereas ASTM 1447 had been voluntary.

CPSC subjects helmets to higher energy hits than EN 1078 (and more of them) from greater heights on both the flat and curbstone anvils. Those impacts are also spaced more closely together than called for by EN 1078. What’s more, the CPSC standard requires that passing helmets withstand the hemi anvil test—EN 1078 does not.

On the other hand, CPSC is slightly less demanding than the Snell 95 standard, which exposes helmets to greater impact energies and requires a lower test line than the CPSC standard, thus emphasizing protection over a greater portion of the helmet. Not surprisingly, the CPSC standard is also less demanding than the ASTM F 1952 downhill mountain biking helmet standard, which is similar in many respects, but calls for greater impact energies and, if a chinbar is present, a chin bar deflection test.

While all helmets sold in the United States must meet this government standard, government agencies don’t actually test these helmets as part of the certification process. Instead, brands must submit eight helmets of any given model to a “reasonable testing program”. Testing can be conducted by either the helmet manufacturer or a third-party testing facility that strictly adheres to the to the CPSC standard test protocols. It’s been called, by some critics, certification via “the honor system”.

Per the CPSC standard, records of the test results must be kept on file for at least three years and made available to the Consumer Products Safety Commission within 48 hours of a request for verification. Violations of the standard can result in “recall, injunctions, seizure of the product, and civil or criminal penalties.”

While this standard has been in existence longer than other cycling helmet standards profiled here, relatively few helmets meet Snell’s 1995 “B-95” standard. This is generally true for at least two reasons: (1) B-95 is a completely voluntary standard and (2) Helmets that pass B95 are generally bulkier and less attractive)

The Snell Memorial Foundation is a nonprofit organization that has been testing helmets and creating helmet standards since 1957. Snell’s initial focus was on high-performance racing helmets (automotive) and their tests still seek to ensure that helmets provide a level of protection at very high impact energies. In the case of the B-95 standard, that means cycling helmets are dropped from higher heights on all three anvils (flat, hemi and curbstone) than in any other standard, aside from ASTM’s F 1952 downhill mountain biking standard. Those greater drop heights result in higher impact energies, making for a somewhat bulkier, less attractive, and heavier helmet. See the charts below for specifics. Furthermore, the Snell B-95 standard also features a lower test line than CPSC (though not as low as EN and AUS/NZ standards), which means that more of the helmet surface needs to manage impact energy to the test’s specified threshold.

While most other standards allow helmet brands/distributors to either self-certify or have a third-party testing facility certify that their helmets meet the standard in question, the Snell Foundation itself tests the helmets that are submitted for Snell certification. Snell also tests samples selected randomly from retailers. They believe this helps ensure that the helmets certified by Snell are representative of the models consumers are purchasing.

Does Snell equal “the best”?

This is a question that often arises when people consider Snell-certified helmets. The short answer: Not necessarily.

If your goal is to buy a helmet that provides you the greatest level of linear energy management during extremely rare, high-speed/high-impact energy crashes, the Snell-approved helmets might be high on your list for consideration.

Snell testing protocols favor helmets that may have better energy management at extremely high impact speeds. That said, product design is often a matter of trade-offs. Making a helmet excel at damping or “attenuating” high-energy impacts by equipping it with higher density foam, for instance, may lead to a helmet that is less effective at damping lower impact energies during normal to slow-speed crashes. Which is the better helmet? It’s impossible to definitively say since every crash is a unique event and no one can predict whether their next crash will be high-speed or relatively low speed. If you could predict the crash, after all, you might not crash in the first place.

*Hemispheric (“hemi”) anvil: Shaped like a orange (4 inch diameter), the “hemi” focuses energy onto a small portion of the helmet shell.

*Curbstone (or “hazard”) anvil: As the name suggests, this particular anvil is designed to mimic the rounded edge of a curb or guardrail.

*Edge anvil: Used in hockey and speed-skating helmet tests, this anvil is used to replicate the business end of an ice skate.

*Cylindrical anvil: Tests the helmet’s effectiveness when striking rounded metal objects such as a parking meter or sign post.