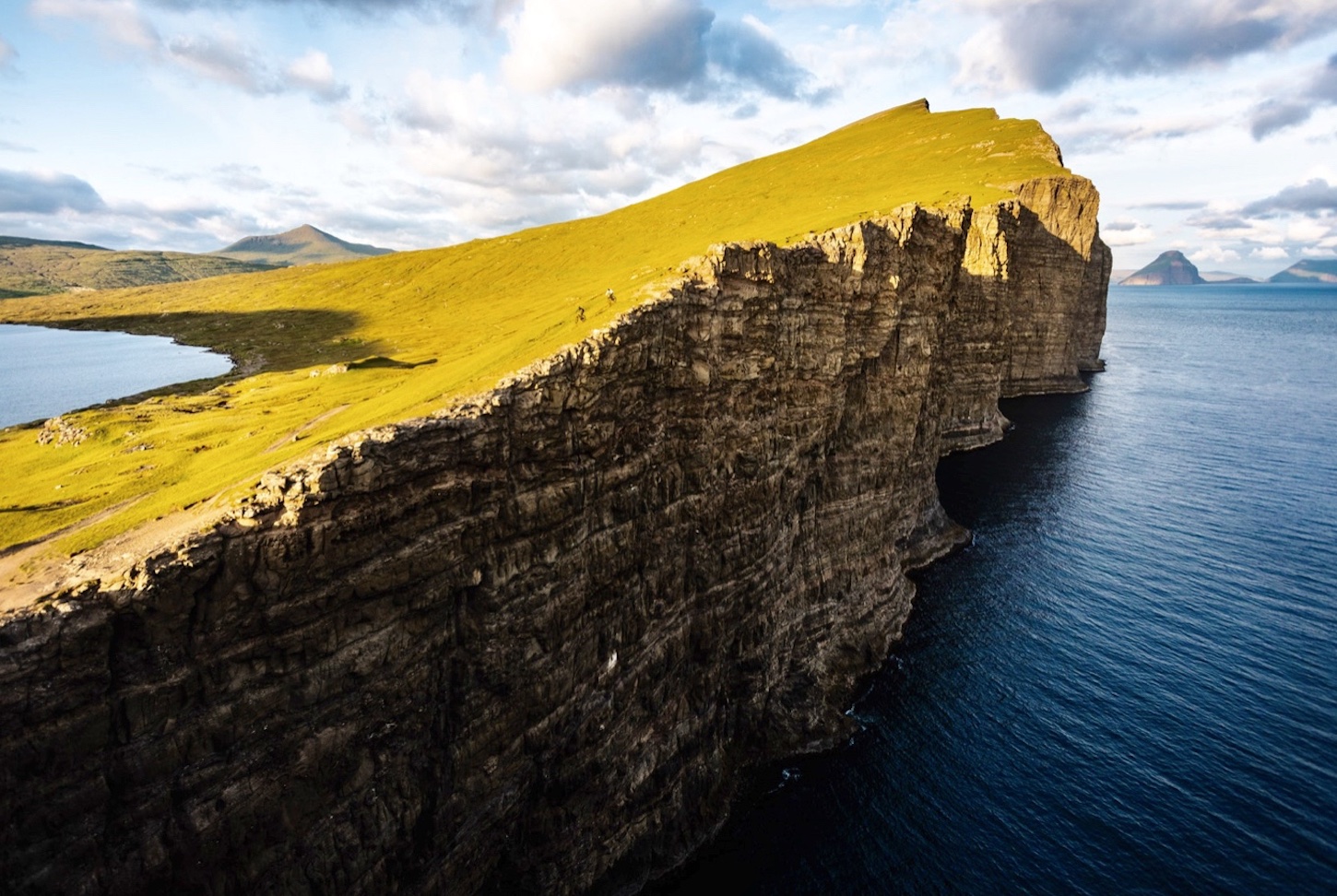 words and photography by Killian Bron

Located halfway between Iceland and Norway, they are among the few islands that are still almost untouched, with a harsh and unpredictable climate. This was the main selection criterion for the shooting of this sixth episode. We were looking for a remote place, which does not attract tourists in mass but which is full of magnificent and atypical places. I am not talking about spots and tracks built with mechanical shovels, but rather huge green and hilly areas, broken by steep cliffs from one end to the other.

There are almost no trails. Except for a few traces taken by the sheep, all the islands have kept their natural charm, without artifice.

You will tell me: How to combine mountain biking with this destination? That is indeed a good question!

Each trip begins with a week of scouting. Nothing can replace these moments in the field to immerse yourself in the places and imagine the concept of our different videos. These are days of discovery, exploration and certainly the best of the trip, where nothing is yet planned. But they can sometimes be stressful when nothing is achieved.

I was recently thinking that cycling was sometimes just a pretext, because what we are experiencing on the spot is so intense. Until now, we have essentially revealed the facade to you through pure ride, piloting or speed. But very rarely what each trip brings us and teaches us.

The Faroe Islands are clearly one of these resourcing places. As I write these few words, I remember those moments admiring the peaks and fjords as far as the eye can see, sitting quietly on one of the many promontories on the edge of the cliff. I still don’t see a path, but the possibilities of riding are endless. I imagine myself on each ridge at sunrise or sunset, playing with the reliefs in an idyllic setting. It is this feeling of freedom that has guided our new adventure!

Jérôme Clementz joins us for the second week. I have always respected and appreciated Jérôme as an athlete but above all for the character and his vision of the bike. He is one of the few riders to have associated his sporting career on the world enduro circuit with all his other projects. I was also curious to share our common passion for cycling and travel by integrating it into a MISSION.

At 4:00 in the morning, the first day is radical. We reach one of the islands only accessible by ferry but the rain and a freezing north wind intensify. We will spend the day waiting in the van, without even being able to enjoy the landscape with a fog so thick that it blackens all the landscapes more than a meter from our nose.

We will not see the color of the lighthouse perched on the island’s peninsula either, nor the steep ridges scattered all around. On the other hand, we had time to make the world wait for 6 hours on the next ferry, the same one we missed 10 minutes ago. Fortunately, the sea is relatively calm and this last ferry of the day is maintained….

The tone was set after a first week of clement spotting. The whole team accepts this and we take care to plan our days with plans B. Each trip is anticipated by looking at the weather, the few webcams and following the advice of the locals. It is very easy to get lost when this famous fog appears, knowing that there is no path to follow… only cairns scattered about fifty meters in the best of cases.

To spice up the stay and find alternative solutions to exploring new lines, kayaking seems to us to be a good solution. The 18 islands are sometimes close to each other but some areas are difficult to reach by foot. So many advantages thanks to our kayaks! We no longer depend on ferry hours, and that’s without counting the limited number of places available for each trip…

There is a “but”, of course! Currents are sometimes violent. Even if I am not against being stranded in Iceland, it is difficult to plan the trip by kayak with Jérôme. And I might as well tell you that I can more easily spot lines on mountain bikes or skis than I can read sea currents. Anyway, the MISSION is starting to be interesting!

I have a nice memory of our dual race overlooking the canyon. The erosion literally halved the field, offering the possibility of rolling on each side. A new ride, just like what motivates me in all these projects.

This day was the real starting point of the shooting, before going on to all the other spots. She also set up our duo with Jérôme, inspiring everyone to find lines and trust her colleague when he says it works.

The vision of the ride is personal and sharing plays an essential role in discovering different ways to read the same face or to cross a rock wall. Whether on the trail or on the way home from the bar, there are always lines or obstacles to cross to have fun.

The landscapes are certainly magnificent but at first glance rather similar. That is to say, large expanses of green and humid land, with rocky and steep peaks. But think again, these raw landscapes do not reveal all their secrets! Sneaking through the valleys all day long, you can see new stretches of black sand. In the distance, we can already imagine the possibilities of lines and it is no longer enough to wait until the sun is in the alignment of the valley to enjoy the beautiful lights.

In any case, there will only be one passage! There is no question of redoing a line that has already been ridden. I was talking about skiing just before, but it’s exactly the same principle, the line is interesting as long as it’s untouched.

To reveal more details about the shooting and the artistic aspect of each video, the light slots are important. In this case, they never last more than 15 seconds. Outside the valley, the wind blows very strongly and the many clouds constantly hide the sun.

This light brings out all the scenery and especially when it is low, i.e. at sunrise and sunset. You have to be patient and anticipate the movements of the clouds to leave at the right time. In a nutshell, it was our challenge for the day. On one side for the film crew with Pierre and Jérémie who had to take their shot at once. And the same goes for us with Jérôme, knowing that we couldn’t repeat the same take more than once.

To conclude on the technical parenthesis, it is really interesting to have two operators for a single drone. While Jérémie defines the exact trajectories of the drone, Pierre directs the camera to it. This makes it possible to obtain interesting shots, especially when the scenery is worth it. For the Faroes precisely, the use of the drone is really justified. We concentrated in parallel on classic camera shots to highlight the riding aspect and thus boost the final rendering of the video.

The rest of the trip was just as exotic. I have often pointed out to you that there are very few roads on the island. Indeed, there are no precise routes to reach each summit or interesting places. It’s not part of the culture to go hiking, to make paths in the mountains and it’s really disturbing for us who are there used to it. There are many countries where each summit can be climbed by paths and by all sides… This is not the case here.

On the other hand, there is an atypical path. The only path that until less than 15 years ago allowed to reach the village of Gásadalur – 16 inhabitants – before a tunnel was built to facilitate its access. Now it takes 2 minutes by car to cross against 2 hours by foot including ascent and descent. This story was even the subject of a complete documentary “1700m from the future”, the title referring to the length of the tunnel…

As far as we’re concerned, we just use it for fun on a bike. In the same way that I rode the Dolomites’ paths in episode 4 – MISSION, with a more painful story since they were old front lines… These paths are now places of exchange and meeting but it is, in any case, interesting to know their history!

The trip ends beautifully around the “postcard” of the Faroe Islands. Many of you will certainly remember a picture of a lake, overlooking a cliff with the ocean below. This shot gives the impression that the lake can flow into the ocean. In reality, it is rather the opposite that is happening!

Although the cliffs are no less than 30 meters long, some waves in the event of a storm cross the barrier and greet the lake. Some photos show this and it’s impressive! We didn’t have the opportunity to have such a show during our stay but the sun didn’t displease us, especially after the first chaotic days of the trip.

Because this MISSION would have been much more difficult to organize without his help, thank you Helgi for allowing us to have the authorizations to pass and to be sure that our visit would be welcome. It was also a way to learn more about the culture, mores and history of the Faroes.

A great adventure is coming to an end, certainly one of the last of the year. I look forward to seeing you next season, the time to organize in the winter everything that has crossed our minds in recent months…