Cyclist Aiming to Beat His Own Record for Longest Bicycle “Wheelie” 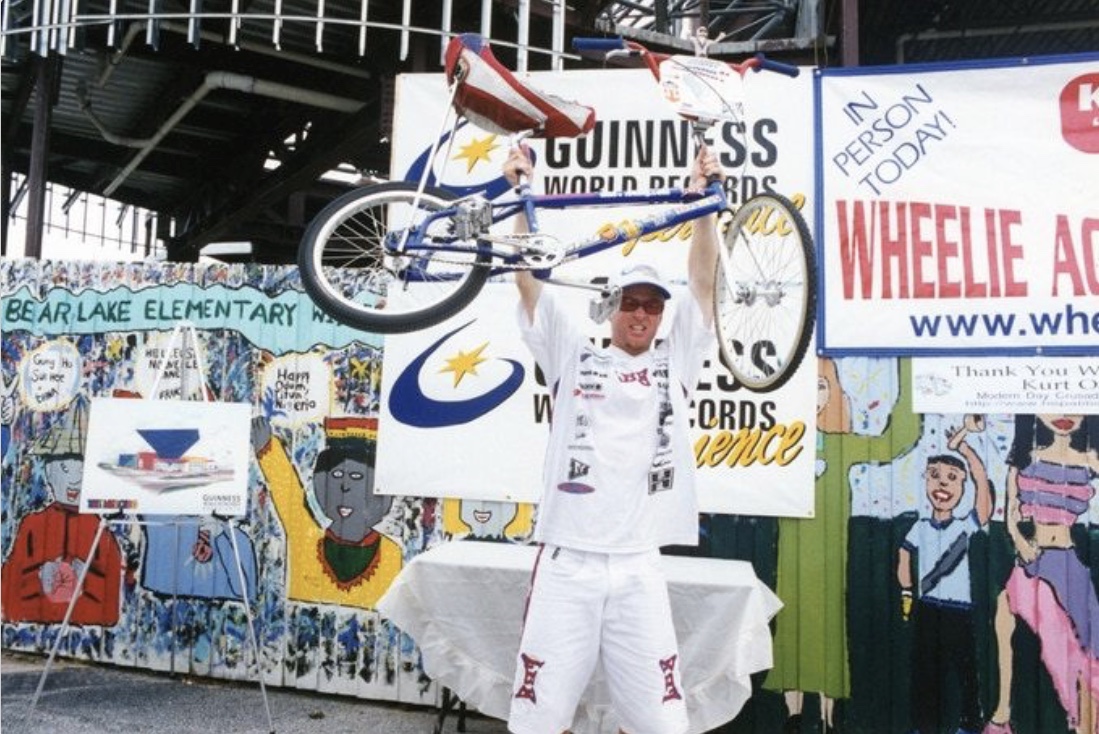 Fast-forward to the present, and the 49-year old Osburn has announced that he will attempt to break his record in 45 days, obliterating his previous benchmark by 29 days.

According to Osburn, he plans to embark on his 2839.6 mile one-wheel journey from Hollywood to Orlando will be streamed live online for everyone to participate.

Osburn says he realized his knack for “wheelie-ing” as a youngster, while also developing a deep interest in the Guinness Book of Records.

“The old-school paperback edition, being over three inches thick, contained the most amazing and unique records that he had ever read about, causing 13-year-old Kurt to officially begin his quest to break a record. Kurt believed that earning a spot in the second most sold book on the planet (behind The Bible), would be the ultimate achievement, so he got to work!”

In order for Osburn’s first record to be official, he had to ride every mile on one wheel while having independent witnesses sign a journal at exact start and stop points. Needless say, a person riding a wheelie, forty to fifty miles each day, at nine miles per hour on interstate 10, one of the most traveled highways in the United States, would garner quite a bit of attention. Indeed, drivers passing by gazed in awe at this “crazy person” man riding along the highway on one wheel. Osburn says he even developed quite a following with the long haul truckers, who began communicate with him on his personal CB radio. Kurt’s handle was “Wheelie King”.

As of late, Osburn has undertaken a crowd-funding campaign on Kickstarter in order to raise enough money for his next feat. ”This record attempt has been two years in the making, If we don’t raise enough funds to pull it off it won’t happen.

Despite being quite a bit older, Osburn says he’s up for the task. ”I have been preparing myself physically and mentally. Since I’ve done this ride and exact same route in the past I am extremely confident I will be successful on all the logistics and challenges I face.”

“Besides optimal camera setup and network connectivity, our state of the art wind-shielding and aerodynamic design prove that a 19-year difference in technology can drastically improve performance.”

You can find how you can support Osburn’s record attempt by visiting his Kickstarter page here.