How Demanding is the Tour de France? 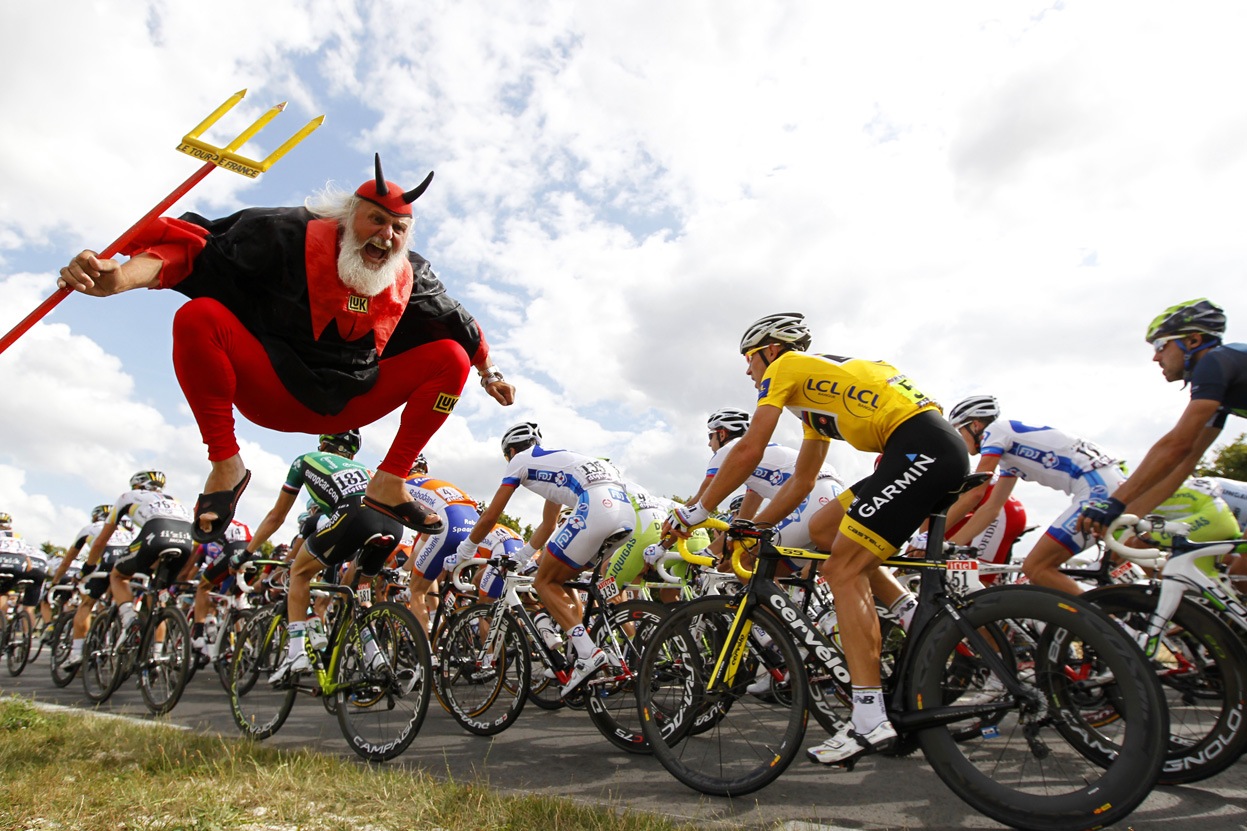 The Tour de France has long been regarded as one of the most demanding endurance events in sporting history. But what does that mean in physical terms for the athletes taking part?

When it began in 1903, the Tour comprised 2,428km of racing over 19 days. Some 60 cyclists competed in that inaugural race, which was eventually won by amateur rider Maurice Garin in an impressive time of 94 hours and 33 minutes. While the structure of the Tour has changed somewhat since its inception, the unbelievably demanding nature of the event remains.

The finish of the first Tour, 1903, with (on the right) the first winner, Maurice Garin

The Tour of today is conducted over 21 days with finishing riders completing a total of 3,500km on some of France’s harshest roads. These roads include the long (around 200km) relatively flat early stages, which are designed specifically for sprinters and ridden at remarkably fast average speeds (around 45km/hr).

At the end of these stages, which can last for four-to-six hours, riders are required to overcome severe mental and physical fatigue in order to maintain speeds of more than 60km/hr for the last five-to-ten kilometers of racing, reaching speeds of 75-to-80km/hr at the finish line.

Those wishing to contend the sprint will attempt to conserve as much energy as possible throughout the stage in order to produce sufficient power (around 2,000 to 2,500 watts) required reach these speeds. (It’s worth pointing out that healthy men and women in other walks of life would struggle to produce more than 800W and 600W on a bike, respectively.)

Such high power outputs are needed to rapidly accelerate the riders against the high wind resistance – and would be sufficient to power a fridge, TV and most of the lights in a standard house.

Perhaps the more demanding stages within the tour are those that travel over some of Europe most gruelling mountain passes (known as “hors category” ascents). These mountains are often greater than 10km long, at an average gradient of 5-10%, requiring more than one hour of continuous climbing.

The high altitude at the summit of these mountain passes (in the region of 2,000-2,500m) makes the speed the Tour riders ascend (around 20km/hr) even more impressive. The stage profiles video below should give an idea of the challenge facing riders on this front.

At such altitudes the reduced barometric pressure limits the ability to deliver sufficient oxygen to active tissue (muscles), compromising exercise capacity by as much as 10-to-15%.

Indeed, the top of the climbs in the Alps and Pyrenees are high enough that many sedentary unacclimatised onlookers may begin to experience symptoms of acute altitude sickness, including dizziness and shortness of breath.

Since such mountain stages are often extremely influential to the overall outcomes of the race, riders wishing to finish well in the general classification are required to stay with the leading riders during each relentless surge or attack.

The average power output riders apply to the pedals during their 30-to-60-minute ascent of mountain passes can be upwards of 450W (6.5W/kg). To put this in perspective, the average trained recreational cyclist may be able to hold this power output for a maximum of between 30 and 120 seconds.

The extremely intense and long duration of the stages within the Tour de France require riders to consume an average of 23–25MJ/day (5,500-6,000 kcal), which is more than double the average daily calorie intake required by most people.

Achieving such high calorie intake is obviously complicated by the high demands of racing and the large percentage of the day spent on the bike. Still, in order to avoid depleting energy stores, cyclists are required to consume carbohydrates at a rate of approximately 25-60 gram an hour during racing.

Failure to consume sufficient macronutrients during – and in the evening following – racing will result in a progressive decline in exercise capacity and ultimately an inability to complete the Tour.

Despite consuming extremely high calorie diets, riders in the Tour will still experience significant lipid and protein breakdown throughout the three-week race.

The physiological stress resulting from 21 days of racing begins to alter hormonal function, resulting in a decrease in resting cortisol and testosterone, a situation that’s typically only observed after months of intense training.

The continuous and repetitive stress placed on the body during the Tour also increase injury and suppresses the immune system, increasing the rider’s susceptibility to illness.

Regardless, the riders are required to wake up each morning for 21 days in July, put on their lycra and ride down to the starting line if they hope to finish one of the world’s toughest races on the Champs-Élysées in Paris.