Dockless Bike Sharing and Relearning: A New Technology Reminds Us of An Old Problem 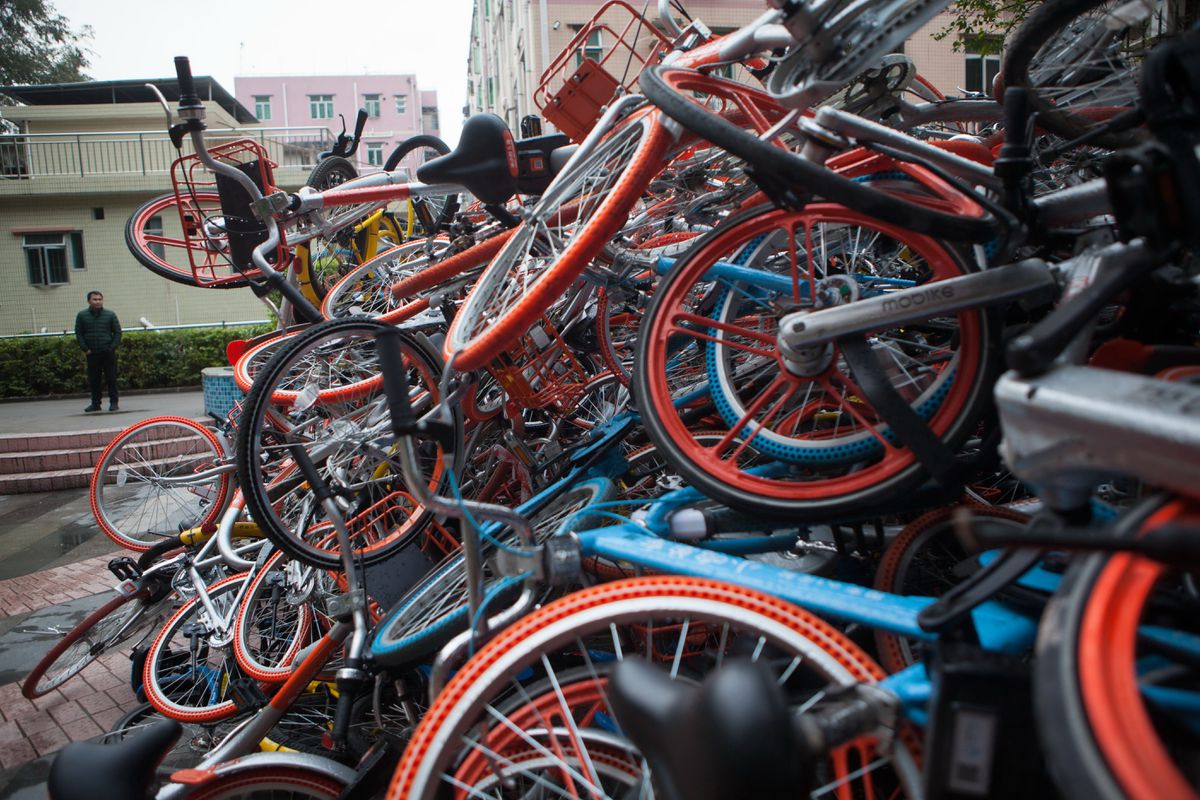 article by James Gleave, Founder and Director of Transport Futures

Here in the UK, somewhat of a mini-stir has been caused by the latest technological innovation taking place in cycling, of all things. The public bike share is about to have a revolution of its own, thanks to new tech, and a company from Singapore.

Dockless bike sharing is a simple concept. Whereas current public bike sharing schemes require you to walk to a station, tap in a code or wave a fob or card or something, before it will give you a bike, and then you have to find a free bike station near the end of your trip, dockless does what it says on the tin. A bike that you can leave anywhere, for anyone to pick up (or the poor sod driving around the city all day picking up stranded bikes to try and balance demand and supply). All you have to do is tap an app, and you pick it up.

It is easy to see why cities would be very attracted to this model. While having undeniable congestion and health benefits, public bike share is horrifically expensive to run. You don’t have to build expensive docking bays all over your city. A private company provides a public service at no cost to the authority other than ensuring that the company doesn’t do anything too stupid in its operations. Such services are increasingly popular with technology natives who want to have access to a bike, without the pain of trying to store it at either end. And finally, it makes a bold statement about how the city is a place for bold, innovative start-ups collaborating with the city on major issues.

All gain, no pain for the city, right? It is, if you ignore the tragedy of the commons. Because despite all our best efforts at nudging and behaviour change, people will do stupid things. Like leave bikes on pavements. Or dump them on islands.

Dump them in any available body of water. Or parked up in a manner that I can only describe as a collapsed scrum.

Then people don’t do silly things with them. Like use them, but cycle to the same place leaving bike deserts in some areas. Weirdos.

The lesson of all this is not that such schemes should be resisted because the problems that they cause are a bit hard. The lesson is that uncoordinated, individualistic action in a transport network leads to problems. And that a refusal of city authorities to engage and leave it up to the private sector to sort out is also the wrong approach.

Such schemes do not absolve cities from the principles of sound city planning, street design, and realising the value of public spaces. The examples that we have seen to date have shown that transport services overlaid onto poor basic principles at best act like a sticking plaster, and at worst amplify the issues faced on streets every day. And just relying on the operator to simply sort the problem out is exactly the same as asking delivery companies to ask their drivers to behave. Yes, most people do behave, but lecturing those who don’t does work.

And fining people should be the weapon of last resort. Unless a rogue parked bicycle really is causing a significant danger to others.

Part of the reason for all of this is because, frankly, some people do not realise the impacts of something seemingly innocuous. It’s the classic “I’ll park on the double yellow lines, but I’ll only be 5 minutes” line of reasoning. It’s human nature. But given the opportunity to do the right thing, and if a service is designed correctly, then people will do it.

This is not a problem with oBike. It’s with how we plan our cities.

If you look at things on the surface, the easy conclusions are as follows:

Easy, simple conclusions, with an easy answer: ban it. Or make it such a pain to operate that they won’t do it at all. Nothing says that you support biking like making bike sharing such a pain that people don’t do it.

But dig a little deeper, and you see what the fundamental challenge is. Our city infrastructure is out of kilter with the nature of the demand being satisfied by dockless bike sharing. It is geared towards a car-dominated vision of the past, where bicycles are an inconvenience to the passage and parking of the car, and to the free flow of pedestrians.

So we don’t provide for it. And then stuff like this happens.

But there are practical steps that cities can take now to responsibly plan for, and incorporate, dockless bike sharing schemes into their cities.

The first thing to do is invest significantly in your public bike parking stock. Make it convenient and attractive for people to park these bikes in these bays, and build more of them. Yes, this means taking away car parking spaces and building good quality bike parking. You may wish to go one better and have special areas for dockless bike share bikes as part of this cycle parking. All it costs is a few extra yards of paint, a couple of plant tubs as barriers, and contractor time.

Secondly incorporate this investment into deals with private sector companies who want to partner with you. The proposition is simple. You want more people cycling, and you are willing to put up money in infrastructure investment to make it worthwhile. The dockless bike sharing companies want more people cycling, and to make money. Say in return you will help them (non-exclusively), so long as they share their anonymized data on where people actually park their bikes.

This is a gold mine for you. Few cities know where people actually cycle to, without significant grunt work, local knowledge, and someone willing to badger businesses for their travel plan data. But what a resource. Imagine being able to put bike parking in places where people actually cycle to, as opposed to relying on private landlords, known trip attractors, and a bit of guesswork. Accessing this data then creates a virtuous circle. You know where people park their bikes, so you invest in bike parking, that could lead to more people cycling. Bike parking, but data driven.

Thirdly, suck up the fact that if you want bike sharing in your city, you will have to do some dirty work. Fishing a few bikes out from ponds is worth the hassle of even hundreds of people using bike sharing every day. No matter how much your parks and recreation divisions will hate you for it.

Fourthly, if you haven’t already got a data sharing agreement in place to identify people’s cycle routes for the city, then (a) why the hell not? And (b) use this as a reason to get this sorted. A bit of time with your legal team working on this agreement now will save you thousands in the future, when you really want to start mining the treasure trove of transport data that is coming your way.

Fifthly, and finally, weave bike sharing services into your digital transport and place making initiatives. Integrate them with public transport smartcards, open data platforms, mobility as a service providers, transport start-ups. Use their datasets to inform decision making on where to invest in bike tracks and public realm improvements. Embed these operators into the communities they serve through community-based partnerships.

Oh, and don’t forget to invest significantly in such initiatives too.

Or, you can just firefight the problems. Either way is hard, and fraught with difficulties and risks. But only one is right. I know what I would do.

James Gleave is the founder and director of Transport Futures, a site that covers the ever changing world of transport, and how we travel is changing almost as fast as the technology enabling it. Transport Futures looks to make sense of it all with insight on the changes happening to the world of transport, and showing you how you can make your mobility future happen.