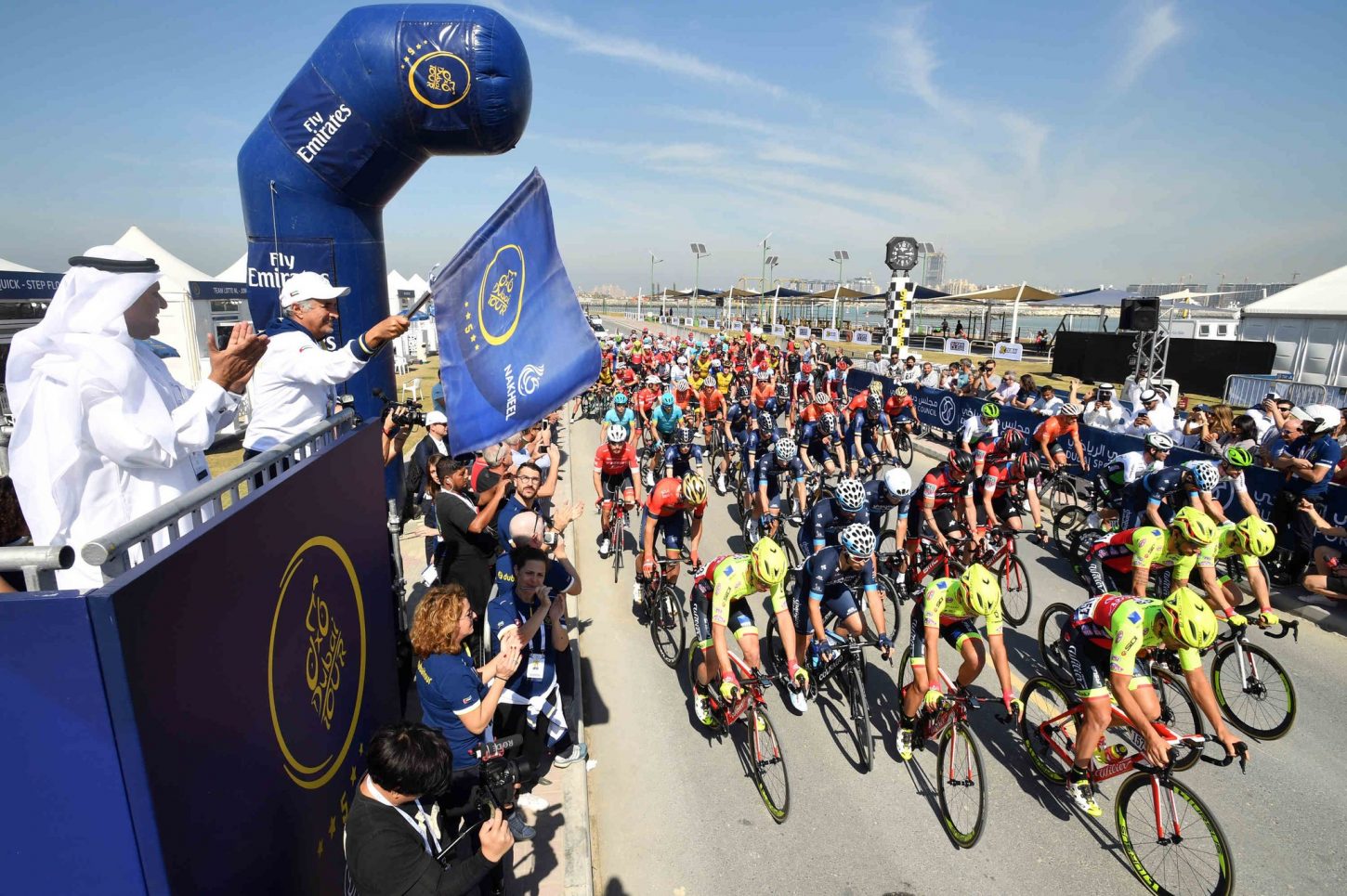 It was a closely fought battle near the finishing line, but Dutch sprinter Dylan Groenewegen triumphed in a bunch sprint to win the opening stage of the 2018 Dubai Tour clocking 3h51’35”. Groenewegen and Elian Viviani were matching each other strength for strength as the stage neared it finish, but the Dutch sprinter gave his Quick-Step Floor counterpart no room to breeze through and finished the 167-km long stage to lead the overall General classification.

As a result, Groenewegen was presented the Dubai Tour’s blue jersey, as well as the points leader’s red jersey and the white jersey that is given to the best young rider. Finishing second was Magnus Cort Nielsen, who finished four minutes behind Groenewegen despite several members of his team involved in a late crash with 8.2 km to go. Quick Step’s Viviani secured the third spot.

The riders got an advantage of more than five minutes over the peloton, but the pack managed to catch them in time to guide the stage to a final sprint.

Groenewegen, who last year won the seventh stage of the Tour of Britain, where he held off Caleb Ewan of Orica Scott, said prevailing in a race that comprises the best sprinters in the world makes the win just that bit special for him.

“I came close every day last year but I didn’t win. I came second twice and I’m glad to start this new season on the right foot, thanks to the good job by my team. Quick-Step made it a very hard sprint by setting a high speed from far out but I launched my sprint with 200m to go. It was very tight at the end but went in my favour. It feels good to win my first stage this year, especially with the top level of sprinters who are here,” Groenewegen said.

Marcel Kittel, who has the maximum stage wins at the Dubai Tour, suffered mechanical problems just when he was about to change gears for his finishing effort and ended outside the top 10. Also missing out were Alexander Kristoff (UAE Team Emirates) and Mark Cavendish (Dimension Data) following the falling apart of many teams’ sprint trains.

“I think I and my team did a good job in always finding a position through the race. In the end, I was brought to the front but about 200 meters before the finish line, when I was about to launch my sprint, I had some technical problems. Had it not been because of the glitches, I think I really had a chance to go for the victory today. I was in a good position; I felt good. So yes, I am a bit disappointed but on the other hand, as a team we did a very good job so that makes me happy. I think we can pull back tomorrow,” Kittel said at the finishing line.

Court-Nilesen, despite falling short, said he was happy with his result. “It’s a very nice start to the tour and the Peloton here is really nice at Astana. Of course, when you are so close to the win, it’s impossible not to be disappointed but I am pretty content with what I have achieved and want to thank the boys who kept me going throughout the race,” he said.