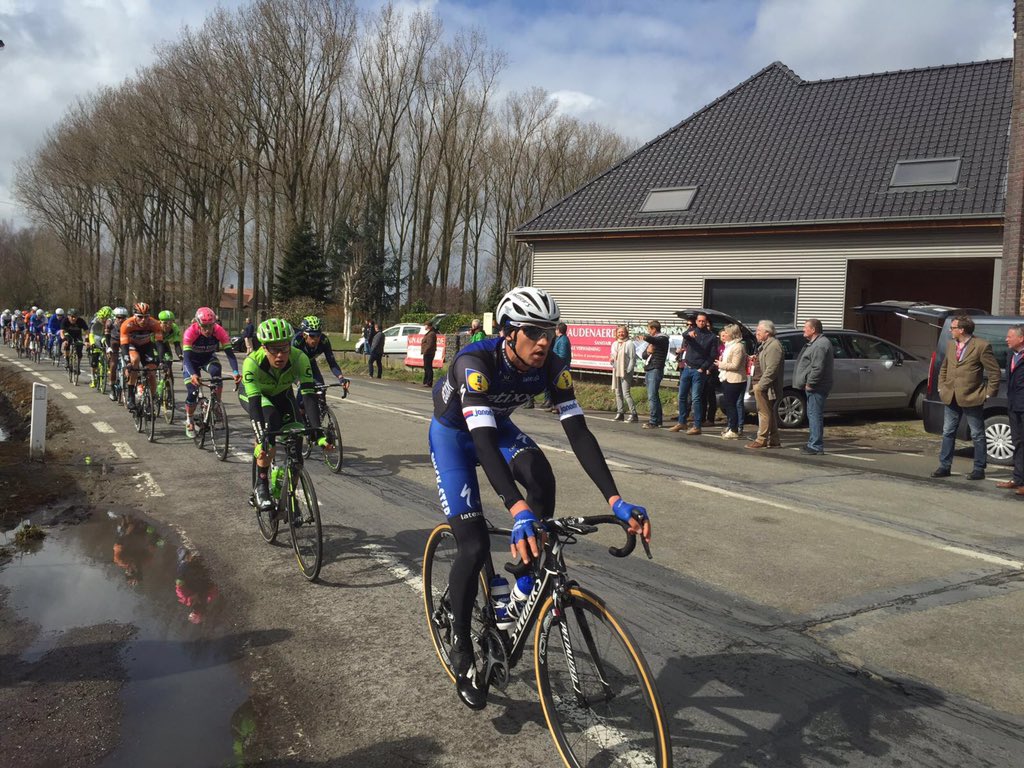 “I guess I was really motivated,” said Kwiatkowski.“I mean, I did my best — you know I was perfectly protected by my mates. Stannard was at the front. Honestly I knew that I had really good legs today and that I had to go for the win. There was no other option.”

“Ian Stannard was in the front and we could play very well. Actually, we worked well with Peter – as we did three years ago in Strade Bianche. Honestly, I knew I had really good legs today. I had to go for the win – there was no other option.

“I know how Peter feels, to have the world champion’s jersey, it’s very difficult. But we both did a very good race.”

“We were working together, but in the finish I was – yeah – I had no more energy. He was better,” Sagan said of Kwiatkowski. When asked if it was that simple, he replied, “Cycling is simple, I think. At the end of a race like this it’s all different. I did the attack and then I worked a lot. The last two kilometres in the radio they said ‘you have to pull, you have to pull, everybody is coming’. I pulled a lot, and for the final I was without legs.”

With 30 kilometers remaining, Kwiatkowski and Sagan succeeded in riding clear of the lead group, while managing to hold-off any subsequent attempts to reel them back in all the way to finish, where the Polish rider easily beat the World Champion with a final surge for the line.

It wasn’t until 60 kilometers of racing got underway, that a sizable group of 13 riders came to form the day’s breakaway group.

Amongst the escapees, was race favorite, Fabian Cancellara, who at one point suffered a mechanical problem, which left the Swiss rider and his Trek–Segafredo team working frantically to regain contact with the  group.

Up ahead, Etixx-QuickStep’s Niki Terpstra continued leading the group at a furious pace over the infamous climb of the Oude Kwaremont – with 37 kilometers to go.

Cancellara’s group finally made contact with the leaders a few kilometers later.

However, the group no sooner hit the next climb of the Karnemelkbeekstraat, Sagan decided to attack, leaving only Kwiatkowski able to respond to his move.

From there, the duo proceeded to build up a slight lead of 22 seconds over the chase, as they entered into the final 25 kilometers.

Heading into the final 10 kilometers, Kwiatkowski and Sagan crested the final climb of the Tiegemberg, with an advantage that had stretched out to more than half a minute.

Meanwhile, back in the chase, Terpstra continued to push the pace, subsequently chipping away at the two leaders’ gap, which eventually fell to less than 20 seconds.

Tom Boonen was the next rider to take to front in an attempt to reel back Kwiatkowski and Sagan, during the final 5 kilometers.

But, the Belgian rider’s efforts were all in vein, as the duo continued to remain outside of their grasp – heading into the final kilometer.

Sagan led for most of the closing kilometer, until Kwiatkowski initiated a final surge during the last 300 meters, that left the Slovakian rider unable to respond.