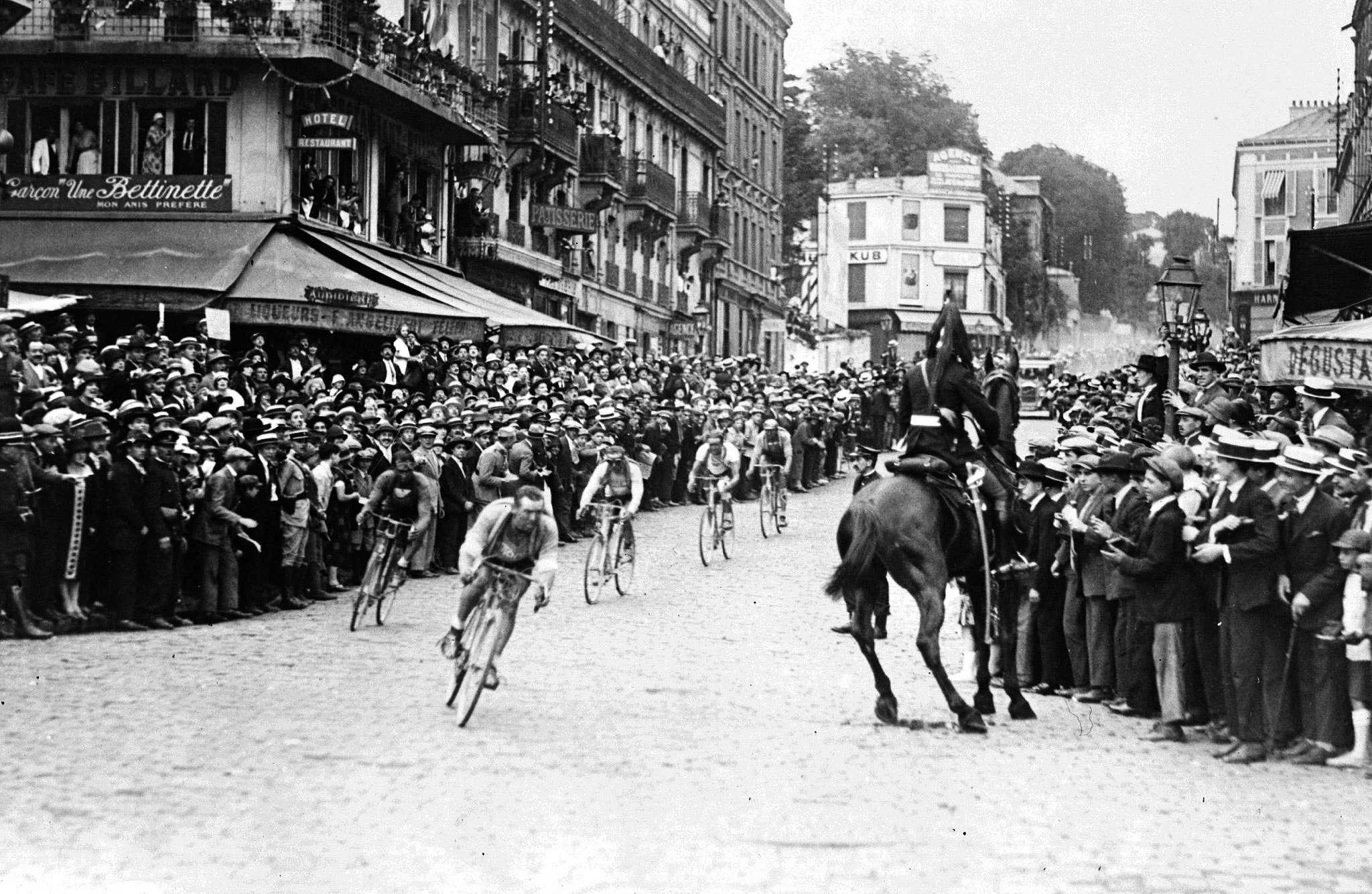 For over 100 years the cycle racing season has included what we now call the “five monuments of cycling” and the Grand Tours. The monuments are single day classics and the Grand Tours of France, Italy and Spain each comprise three weeks of racing. Racing fans wait with great anticipation as spring approaches. In March and April four of the five monuments is the undisputed focus of cycle racing. From May to September the Grand Tours thrill and entertain fans worldwide. The last of these great races, the Giro di Lombardia, closes the European racing season in October on its spectacular route around Lake Como . These races, more than any other, represent the heart and soul of our sport.

And it all started because a taxman wanted a quicker way to collect his tax money!

In this three part series, ‘An Enduring Legacy’, Graham Jones explains the beginning of bicycle racing, he looks at how today’s greatest cycle races first started and how they have continued to fascinate fans through three generations.

For over 100 years our greatest cycle races have proven a timeless formula that works with each succeeding generation. Yet today there is much talk about modernizing the sport and our most prestigious races are being targeted. If modernization is needed then it is in the marketing and drug control areas where change is desirable. To take the cobbles out of the classics, reduce the length of the Grand Tours or change any other part of our great races would destroy their character and with it spectator appeal. Cycling has a rich history and these iconic races (listed in our side-bar) must be protected like masterpieces in an art gallery.

Cycling is intimately linked with the evolution of our modern society. Prior to the invention of the bicycle during the 19th Century, the world had seen agonizingly slow progress in the development of technology and ways to travel. Without roads and technological innovations there would be no cycling. It was not until the 18th Century that radical innovation started to lay the foundations for our modern world (including the bicycle).

The first record of “purpose built” roads was around 3500 B.C. in Persia (now known as Iraq) when Baghdad, the capitol, was a major world city. There are also records that indicate that ancient China had a sophisticated road system. After this era nothing much happened until the Romans came along about 2,500 years ago. To facilitate the rapid movement of their conquering armies, and then later as trade routes, the Romans built roads that are still revered today. However as good as the Persian or Roman roads were, travel was still either by foot or by animals to ride on or draw wheeled carts, chariots and other ‘vehicles’.

After the demise of the Roman Empire the World lived through the ‘dark ages’, ‘middle ages’ and periods like the ‘Renaissance’. Yet right up to the 19th Century there was virtually no progress with respect to travel and certainly nobody had bettered the quality of the Roman road. During the 18th Century steam power was harnessed and ingenious inventors created the first mills that heralded the ‘industrial age’. As the agrarian populations of Europe were rapidly herded into grim cities springing up to serve the new mills and factories there grew an acute need to be able to move finished goods rapidly into new emerging World markets. While Napoleon Bonaparte was running roughshod over Europe early in the 19th Century, inventive minds came up with ways to take static steam engines from the mills and perch them on wheels. These new machines, feared by most, proved their feasibility at the famous Rainhill Steam Trials of 1829 (an important competition in the early days of steam locomotive railways- Wikipedia) in England when Robert Stevenson emerged victorious after a week-long of intensive competition against all sorts of steam driven contraptions. Stevenson’s “Rocket” opened the door to the steam age and within a decade many hundreds of miles of rail tracks had been laid throughout Europe. Originally it was thought that this new form of transport would be used just for goods but at Rainhill it was clearly demonstrated that steam trains could be great ‘people movers’. Suddenly stage coach services, horse drawn haulage services and canal boats became a relic of the past. The already poor road system fell into even worse decay.

As ‘iron roads’ spread like wildfire through pristine countryside they proved also to be a catalyst for inventive 19th Century minds to be triggered into an incredible period of dramatic innovation. Napoleon, needing to move his armies fast, rebuilt many roads, often with new cobbles or repaired existing cobbled sections to facilitate rapid movement of armies and supplies. Today preservationists work hard to save some of these old roads in their original form. In the spring cycling’s famous classics rumble over many of them and for the rest of the year they are protected as (living and working) historical landmarks.

In 1824, five years before the steam engine came of age, the first use of asphalt for road occurred. Asphalt blocks were placed on the Champs Elysees in Paris and thus this famous road, which now sees the last stage of the Tour de France speed over it every year, became the first modern road in Europe. In 1827 the next breakthrough came in the U.S.A. when a Belgian immigrant, Edward de Smedt, engineered modern “well graded” maximum density asphalt. Road paving improvements and innovations continued into the early 20th Century to create the arteries that would eventually carry the bicycle and motorized vehicles.

Historians agree that the first claim for a practical bicycle was that developed by Karl von Drais, a German tax collector. Drais invented his machine in 1817 (and patented it in 1818) in response to severe hardships caused by the crop failure of 1816 that, amongst other horrors, had decimated the horse population. With horses almost impossible to procure, Drais wanted an efficient way to cover his tax collecting route that was faster than foot. His wooden ‘Draisine’ was what he called in German a ‘laufmaschine’ (running machine) and became known in English as a “hobby horse”.

It was two wheeled and steerable with no gears or chain but it did have a rear wheel brake. His first reported ride occurred on June 12, 1817 when he covered 13kms in less than an hour. At the time this was considered phenomenal and it sparked a flurry of copies and variations on the original. By 1819 a “velocipede” craze had gripped the well-to-do upper classes that were always attracted by new fads. Numerous accidents and the introduction of severe penalties for improper riding finally led to the Draisine being prohibited on city streets and after 1819 the Draisine faded into obscurity.

However the “cork had been popped” and for the next few decades bicycles of all sorts of strange designs were created. There are endless arguments as to who produced what first, but the future of the bike depended on some very important inventions: rubber tires, chains, ball bearings, gears, etc. Of equal importance was the development of paved roads to make travel easier and faster. These critical innovations slowly emerged as the 19th Century drew to a close.

Following the Draisine, the next major milestone in cycling history occurred on May 31, 1868 when an expatriate English Doctor, James Moore, living and working in Paris, won the very first, official bicycle race. This took place in the park of St. Cloud in the Bois de Boulogne, Paris and it was on a 1.5 km cinder track normally used for horse racing. His bike was a converted Draisine which had cranks and pedals fixed to the front wheel hub. How this bike came into being is a complex story all of it’s own but basically it was known as a Michaux (after the blacksmith that built it) and most people credit Pierre Lallement with inventing the pedal and crank system. On that historic day in 1868 there were in fact two races and Moore won them both. Second each time was a Frenchman by the name of Jean-Eugène-André Castera. Later that year the very first open-roads race was held between Paris and Rouen. Moore won again and this time he was 45 minutes ahead of second placed Castera.

The Micheaux (now known as the “bone shaker” for its rough ride) sparked a major cycling craze in both Europe and the U.S.A. Paris was especially favored for cycling due to the many newly macadam paved boulevards. Sadly the Franco-Prussian war of 1870 put an abrupt end to the craze in France but it flourished elsewhere except in the U.S.A. where it petered out in 1870 due, it is said, to the deplorable road conditions of the time.

After 1869 the Micheaux gave way to the high-wheel commonly known as the “penny farthing”. The critical invention with this bike was the wire spoke wheel invented by Frenchman Eugene Meyer. Also finding their way on to these machines were ball bearings, solid tires and hollow-section steel frames.

For the next two decades every conceivable design for bicycles were concocted. Most had different sized wheels; some had three wheels and most were heavy and unstable in some form. Due to their inherent danger, cycling became increasingly a sport for skilled enthusiasts. Even so the ‘cycling craze’ continued in full swing.

Finally in 1885 a design came forward that forever set the pattern for future bicycles. The famous Rover Safety Bicycle was introduced by James Starley. With equal sized wheels a chain drive and its diamond shaped frame construction, it was proven to be far safer than any other design. In fact the word ‘Safety’ in its title was the key factor as this new machine represented a quantum leap in terms of rider safety. Almost immediately imitations appeared throughout Europe and the U.S.A. and by 1890 the high-wheeler and most other designs had been consigned to history. The Rover Safety quickly proved itself to be nimble and fast when ridden by an athletic person looking for speed. The scene was now set for the beginnings of cycle racing as we understand it.