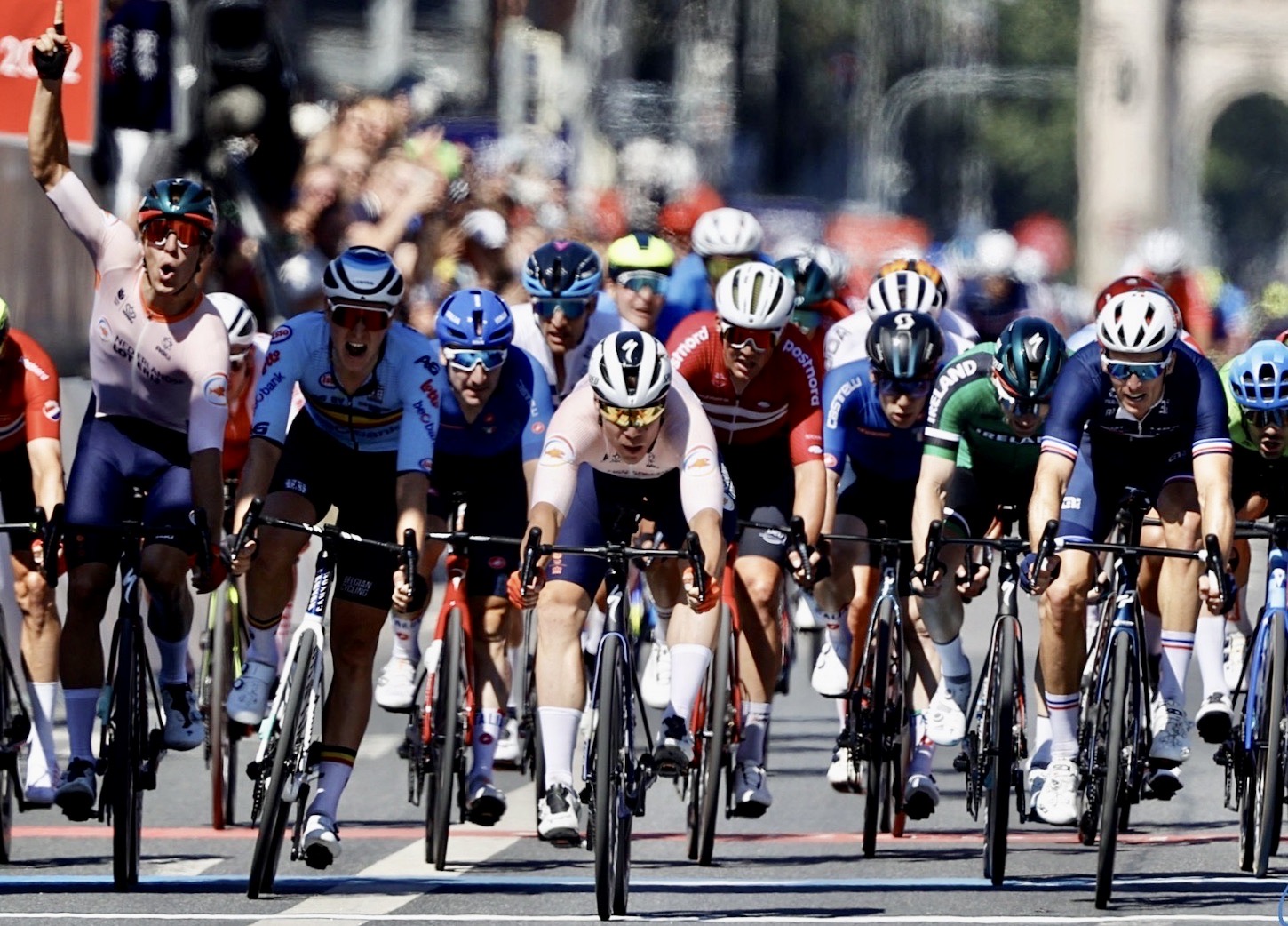 Fabio Jakobsen (Netherlands) came out on top of a thrilling mass sprint to take gold in the elite men’s road race at the European Championships in Munich, edging out Arnaud Demare (France) and Tim Merlier (Belgium) by a nose to claim the gold medal.

It was Jakobsen’s 12th victory of the season and marked the first Dutch title in the European men’s road race in the modern era.

“We don’t race together much as team-mates, but we made a good plan and everybody did his work and put in a huge effort to put me in position,” Jakobsen said.

“Danny van Poppel did an incredible job putting me with speed at the wheel of Merlier and I could come from his slipstream and pass.

“We had a really strong team to control this race and we saw the race was under control so we decided to move up just two laps from the end and then we were in position and the team kept me there until the final corner.

“Van Poppel really did an amazing job and showed he’s one of the best leadout men out there.”

Italy led out the sprint with 1.5 kilometers remaining, leading the peloton into the finishing straight.

But, Merlier later came to the fore with just meters remaining, only for Jakobsen and Demare to catch him on the line.

Today’s victory was a continuation of a good season for Jakobsen, who won the sprint finish at Stage 2 of his maiden Tour de France last month.

The Netherlands’ gold medal tally now stands at four and their total medal haul at 15 midway through day four of the European Championships, putting them sixth overall, while Great Britain sits atop of the standings with seven golds, one more than Italy and Germany in second and third respectively.

The peloton eventually reeled in the day’s escapees, Lukas Pöstlberger (Austria) and Silvan Dillier (Switzerland), during the last 27 kilometers, as they headed towards the final five finishing laps around the center of the Bavarian capital.

The pace was extremely fast during the last few kilometers with the peloton leaving no room for attacks. But, 3 kilometers from the finish is when the Swiss rider Stefan Bissegger made a surprise breakaway.

The Italians managed to catch up the Swiss rider but in the final sprint, Jakobsen, placed in perfect position by his team, crossed the line ahead of Demare and Merlier.

The Road European Championships in Munich will resume on Wednesday 17 August with the Time-Trial races and finish next Sunday (21 August) with the Women’s Road race.