Fabian Cancellara Out of Tour de France with Fractured Vertebrae 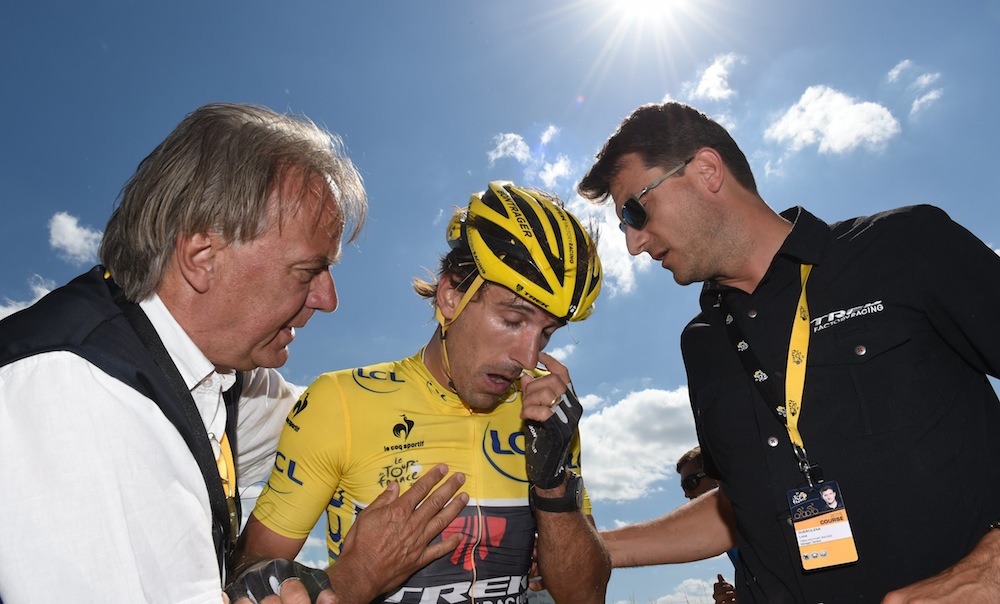 Cancellara was transported to a local hospital, after being ensnared in a major crash involving numerous riders on the famed Mur de Huy climb – less than 60 kilometers from the finish.

Cancellara was seen holding his lower back in pain after the accident, the same part of his back where he suffered a broken vertebrae during this year’s E3 Harelbeke – last spring.

A CT scan later revealed, that Cancellara had indeed fractured his L3 and L4 vertebrae in the crash.

“This is incredibly disappointing for me,” Cancellara said in a statement issued on Monday evening.

“The team was on a high with the yellow jersey and were very motivated to defend it. We have had a lot of crashes and injuries since the start of the season, and we finally had a great 24 hours but now it’s back to bad luck. One day you win, one day you lose.”

The massive crash was apparently caused, when William Bonnet (FDJ) touched wheels with another rider at the front, subsequently setting off a chain reaction that took down a host of other riders, such as Tom Dumoulin (Giant-Alpecin) and Simon Gerrans (Orica-GreenEdge), who were  forced to abandon as well.

According to Trek’s team director, Luca Guercilena, the accident occurred while Cancellara and others were trying to get back on terms with the peloton at the approached of the Côte de Bohissau – when disaster struck.

“In the moment it was quite a surprise for us,” he said.

“But effectively looking at the number of riders on the ground, all the ambulance doctors were quite busy and it was risky if something more happened and you didn’t have any emergency or medical assistance available. I think in the end it was the right choice to make.”

Cancellara, who was riding in the maillot jaune after winning yesterday’s stage 2, eventually finished 11:43 down on the winner, Chris Froome (Team Sky) – who moved into the overall race lead.

Further medical details, ruled out the possibility of a head injury, after Cancellara was seen struggling with dizziness after the crash.

“[There’s] No head pain, he was just dizzy once he had the crash, Guercilena said. But it’s normal seeing how fast the peloton was going.

“He was standing up and I told him to try and get to the end of the stage. He thought about it and he was quite okay to start again, even though he had pain.”