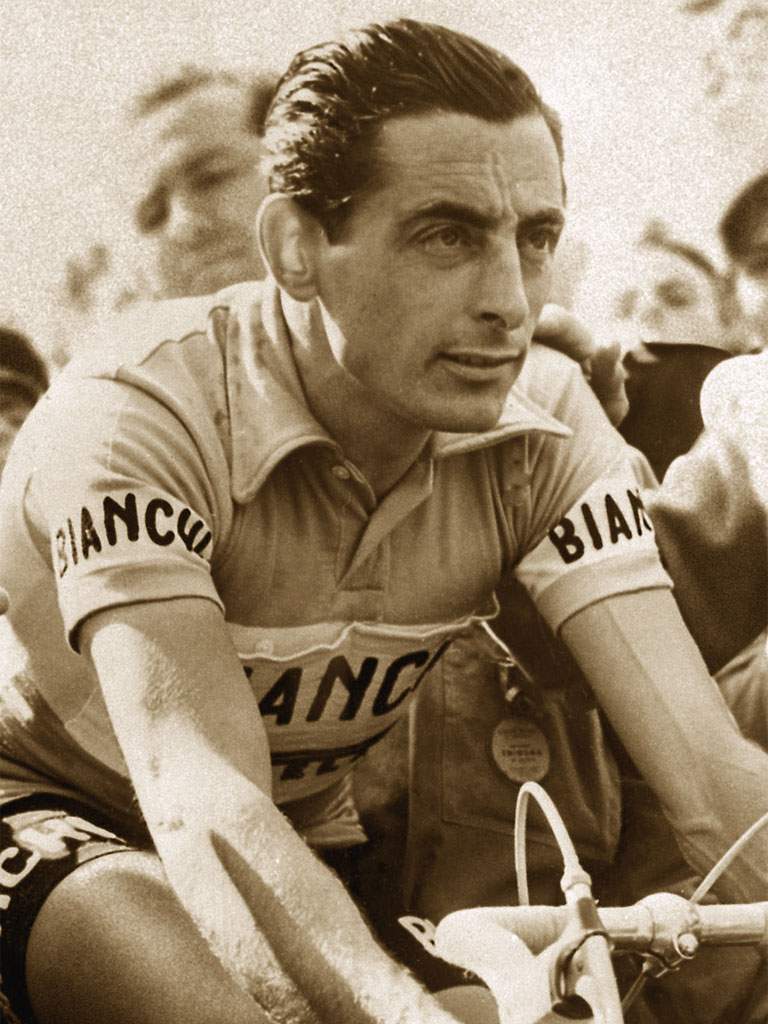 Happy birthday to Fuasto Coppi, who was born on this day in 1919.

Nicknamed “il Campionissimo” (the Champion of Champions), Coppi was a man who truly transcended sport. Indeed, he was one of the greatest champions during one of cycling’s great eras – the Post World War II years.

Italy, traumatized by war, looked to sports heroes for its victories after years of military defeat. Coppi’s battle with another great rider, Gino Bartali, was the stuff of legends. The two men battled through the Giro d’Italia, Tour de France and numerous one-day classics in an epic struggle for athletic superiority and the hearts of Italy.

Even though he wasn’t able to compete for the majority of World War II, Coppi still won a total of seven Grand Tours.

Coppi shares the record of five victories in the Giro d’Italia with Alfredo Binda and Eddy Merckx.

Coppi won the Tour de France twice, in 1949 and 1952, dominating the competition and easily winning the overall title and mountains jersey competitions.

Coppi won three out of five of cycling’s monuments for a total of nine victories in those races. This is third behind Eddy Merckx and Roger De Vlaeminck. Coppi also owns the record of five victories in the Tour of Lombardy.

His victories in the 1950 Paris-Roubaix and 1953 World Championship Road Race capped off a brilliant career that would have no doubt been brighter had his career not been interrupted by World War II.

One of Coppi’s greatest victories was in the 1946 Milan-San Remo race. Coppi attacked with nine other riders just 3 miles (5 km) into the 181 mile (292 km) race. On the climb up the Turchino, Coppi dropped the nine riders and went on to win by 14:00 over the second placed rider, and by 18:30 over Gino Bartali and the rest of the peloton.

In the 1949 Tour de France, Coppi and Bartali lined up on the same team. Coppi steam-rolled the field up the Izoard Pass then gave the stage victory to Bartali as a present for his 35th birthday. The two of them demolished the competition with Coppi finishing first and Bartali second at 10:55.

Coppi overcame emotional setbacks during his career. In 1951, he was overcome by grief at the death of his brother Serse (who tied for first in the 1949 Paris-Roubaix race) just five days before the start of the Tour de France. Fausto was in a state of mourning during the race. Despite his sorrow, he completed the race in tenth place.

Although Coppi was a great athlete, he was fragile physically. Coppi possessed a massive rib cage and an exceptional heart, but had a delicate skeleton which contrasted to his well-developed thighs.

His brittle bones were the result of malnutrition as a boy. He had over twenty serious bone fractures including collar bones, pelvis, femur and a displaced vertebrae. He also had a sensitive stomach and picked up numerous illnesses during his career.

Coppi won his first major victory in 1940 at the age of 20 and his last in 1954 at the age of 35. He continued to ride competitively, well past his prime.

In the end, Coppi caught malaria on a hunting safari in Africa. The illness was mis-diagnosed by Italian doctors and he died on January 2, 1960 at the age of 40.