Flahute and “The Lion of Flanders” 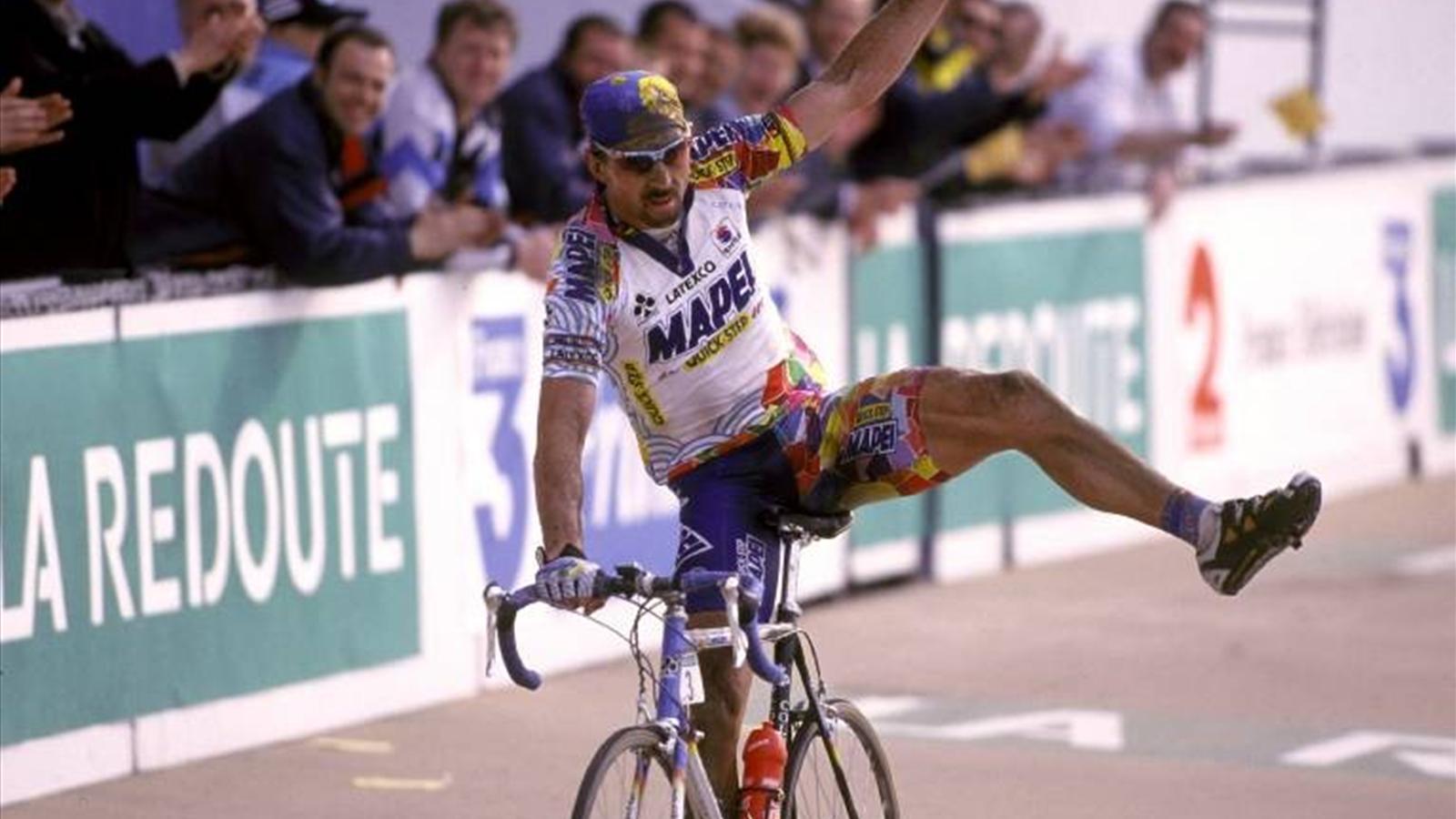 Flahute and “The Lion of Flanders”

Imagine the fastest rides that you do – racing or training. You are on the rivet, eyes glued to the wheel in front as tiny rivulets of sweat sting your eyes. Now imagine upping the pace by about another 4mph or 5mph and staying there for about 100 miles. The road breaks up into long cobbled sections, rough and uneven with frequent potholes. The bunch, over 100 strong, looks for every tiny respite from the cobbles. You dive left onto a narrow sandy strip about 6 inches wide. Suddenly everyone is charging over to the other side of the road where there is a better strip of smooth track. The track finishes abruptly as you enter the outskirts of a small town. The twisting road offers numerous corners. You head into them at full tilt. You sprint out of them even faster. The town has trams (streetcars) and now everyone is trying to avoid getting their wheels into the tracks. Riders bunny hop sideways up on to the sidewalk. Back out of town and the road opens up into a bleak, featureless countryside. Now the road is an endless strip of concrete slabs. About every 10 seconds for the next twenty minutes the gap between each slab sends a sharp shudder up your forks and through your arms to rattle the teeth in your head. All this time a strong wind coming off the ocean is buffeting the peloton. Echelons form and no quarter is given in trying to secure a place in them. Those hanging onto the tail of an echelon will shortly lose contact. For the majority of the riders this infernal cocktail is not much more than an exercise in survival. Hold the wheel in front and grab whatever drafting advantage that you can. Up front the elite riders maintain the incredible tempo and yet look totally at ease. It starts to rain just as you approach another set of cobbles. The speed is increased and now you attempt to stay upright on a surface which is more like riding on blocks of ice. Seventy miles done and the final phase of the race heads for the ‘bergs’. Nasty short climbs, usually cobbled. Forget the pacing; it is now a war of attrition. At the top of each berg the fragmented bunch attempts to become one cohesive unit again. The strong make it, the rest are shelled out and are done for the day. Coming into the finish town or village there is a long cobbled main street with the finish at the far end. You wonder where you are going to find the strength to sprint. The top twenty riders all receive a cash payout. The winner is the hero for the day. Four hours or so of racing at an insane speed. Cobbles, concrete slab roads that never seem to end, brutal cobbled climbs and an endless struggle to stay on the wheel in front while often performing great acrobatic skills just to stay upright. All the while Mother Nature is hurling powerful winds in your face and every now and then it rains hard. Mud and manure from the farms has splashed all over you. On a real bad day you look as though you have a face pack on. Everyone goes home exhausted. The bike is a mess and serious work needs to be done to restore the wheels back to true. On average you will race like this about four times every week.

Such scenes are enacted almost every day in Belgium. Every town and village seems to organize their own criterium or kermesse which is the centerpiece of their annual fair. The locals are out in force consuming generous amounts of beer and ‘pommes frites.’ They are passionate about their sport and will know most of the riders by name. Before the race they invite you into their houses to change and prepare for the race. For local riders their entire family will be out in force to support them. After the race they are hungry for an ‘insider’s view’ of the day’s proceedings.

This is the incubator that has nurtured many of cycling’s greatest: Buysse, Merckx, Van Steenbergen, Van Looy, De Vlaemink. These names of the past inspire an awe and admiration that transcends time and intervening generations. In April 2004 we witnessed the end of the road for possibly the greatest one-day rider of all time – Johan Museeuw. Known as the Lion of Flanders, Museeuw holds the record for wins in World Cup classics, eleven in all. Three times he won the Tour of Flanders and three times the Paris-Roubaix. In the Tour of Flanders alone he has stepped onto the podium no less than eight times. In addition to mastering the five monuments, Johan also became World Road Race Champion in 1996 and has, during his illustrious 14 years as a professional, also claimed the yellow jersey for a while in the Tour de France.

Now, go back to our imaginary Belgian race. Add about another 60 miles and put together a field of around 190 of the world’s very best riders. This would be a Tour of Flanders or Paris-Roubaix. To be a dominant rider in such races year after year does not bear thinking about, but that is what riders like Museeuw, Merckx, De Vlaemink and a few others manage to do. The Belgian school breeds them tough. They thrive in foul weather and on atrocious roads. As children they grow up ‘playing racing.’ Museeuw tells us that the Tour of Flanders route passed right by his house. The kids dream of being like the great champions. When they are old enough to race they start to train in conditions similar to the races. Only the toughest survive and in the Flemish tongue these ‘hardest of the hard men’ are known as Flahute.

Museeuw has left us with many indelible memories. One of my favorites harks back to his 2000 Paris-Roubaix victory.

America’s own Frankie Andreu was the last rider left from a small break. Museeuw bridged up to him. Briefly a gallant Andreu held his wheel until inevitably, along a cobbled stretch, Museeuw pulled away very slowly at first. But then the elastic snapped and the Lion of Flanders was at home alone on his beloved cobbles with just the whole of Belgium to keep him company along the road side or on television. At this point there was still around 50km’s to go and the fans holding numerous yellow flags bearing the black lion symbol of Flanders indicated that there was a powerful wind blowing straight into Museeuw’s face. It was a fearsome display of power and skill that delivered Museeuw to the velodrome in Roubaix. And once more Belgium probably experienced new records in beer consumption to celebrate their favorite son’s exploit. Probably the worst memory (especially for Museeuw), was his Paris-Roubaix crash in the Arenberg forest. His knee was smashed and an infection turned to gangrene which could have claimed his life. Yet he fought his way back to health and the following year won Paris-Roubaix pointing to his knee as he crossed the finish line alone. They don’t come any tougher – even as a Flahute!

With Museeuw gone Belgium was looking for their next great hero. At just 24 years old Tom Boonen was dubbed the ‘Lion Cub’ and ‘Torpedo Tom.’ He plays down any comparisons with former super stars but his illustrious career certainly places him amongst them.

Most of us first became aware of Boonen during his short stay with Lance Armstrong’s USPS team. In 2002 we saw him during the final phase of the Paris-Roubaix riding with George Hincapie as they tried to chase down a small break. It was a classic day in Flanders, cold, damp, misty and gray. Boonen and Hincapie were powering along looking good when suddenly Hincapie slipped ignominiously off the side of the narrow cobbled road and down into a drainage ditch. Boonen was instructed to continue on alone and eventually he made the lowest step on the podium in Roubaix.   In 2003 Boonen produced many good rides but only one win, a stage in the Tour of Belgium. 2004 heralded Boonen arrival as one of the most talented riders of his generation. His twenty wins included two Tour de France stage wins and the Ghent-Wevelgem semi-classic. At the end of the year he was ranked 10th on the UCI rider ranking. In 2005 he achieved five wins with two of them in the hard fought Paris-Nice. This was followed up a victory in the E3 Prijs Vlaanderen which is another of those races that dish up the type of road conditions associated with ‘Flanders’ and ‘Roubaix’. Some observers rated Boonen’s win in this race his best ever.

In years past, Boonen was asked about his chances on the start line of Milan-San Remo. While he played them down, he of course said that he would love to win such a prestigious race as La Primavera. However at this level the head has to be 100% for the task in hand. As he explained, Milan San Remo is the most important one day race on the calendar for the Italian riders. For him (and all other Belgians) he made no qualms that ‘Flanders’ and ‘Roubaix’ are the most important events. To win such races in front of your own countrymen is the pinnacle of success.

This year the European winter has received its usual mix of steady cold temperatures, consistent snow and plenty of freezing rain. If winter hangs on into April the Northern Classics are going to be exceptionally uncomfortable races. However, just like Museeuw, Boonen and the rest of Belgium’s hardmen in the past, there’ll be plenty of riders up for the challenge.