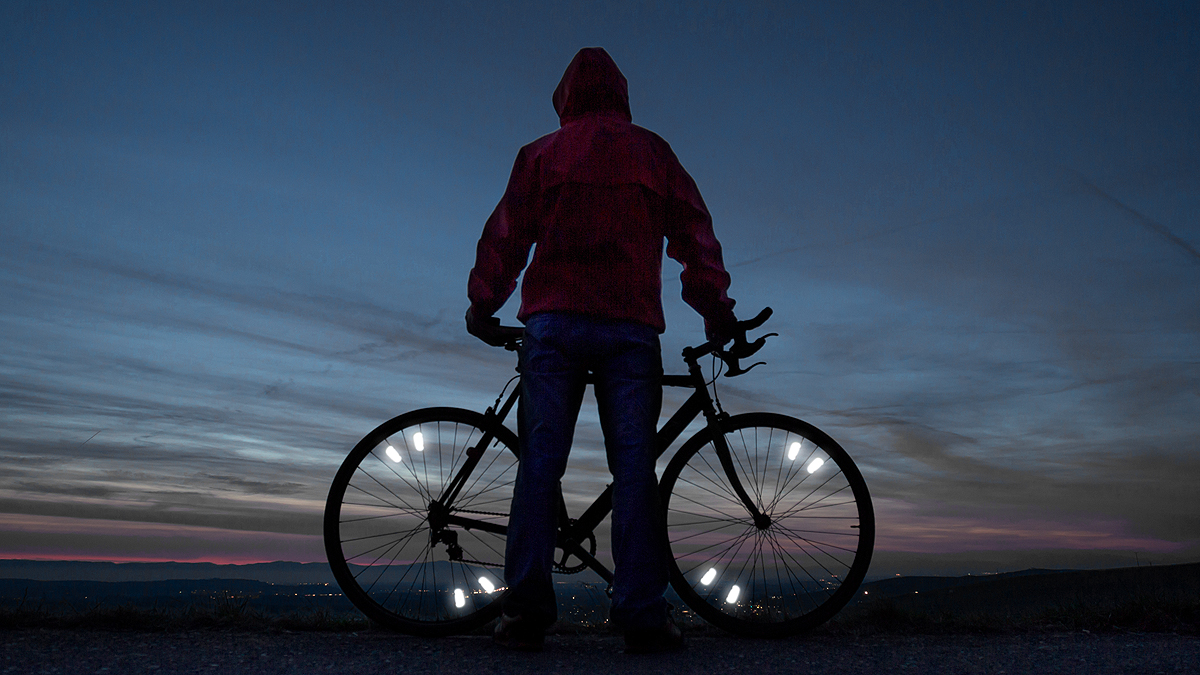 22 Apr 2016
By Campionissimo - In LATEST ARTICLES, THE DOUBLE DIAMOND

Groovy bike gadgets always abound on Kickstarter, the latest being FLECTR, which claims to be the world’s first wheel reflector that combines outstanding aerodynamics with state-of-the-art reflection. Moreover, it’s weightless and indestructible.

Touted by its designers as being, “eye-catching and paper-thin”, the FLECTR fits every spoke like a glove.

“The age of ugly wheel reflectors is over”, say the designers.

Like most design projects, FLECTR began about a year ago as a rough concept. However, according to the designers, after several visits to a few photometric institutes and countless hours of CAD modelling and evaluation under real conditions, they achieved what they set out to do.

“We’ve created a new-generation wheel reflector, its name is FLECTR.”

:: Sleek and sexy over the day. A small silver flag – that´s it.

:: Aerodynamic efficiency.
FLECTR´s shape and profile are optimized to avoid air drag. Extensive testing with incident flow velocities of up to 100 mph / 160 Km/h has shown that FLECTR passes these tests without flapping, moving and noise.

:: Zero-weight design.
With a weight of only 0.024 oz / 0.7 gram FLECTR does not affect the dynamic balance of the wheel in sharp contrast to others.

:: Easy assembly.
FLECTR is foil-based. Just remove the foil carrier, center the reflector on the spoke vertex and press both side panels gently together. Tool-free and easy.

Production of FLECTR is resource friendly and requires about 5-10% of raw materials compared to conventional reflectors.

After months of research, sourcing of materials and technical planning, the designers say their product has been vigorously tested under various circumstances and changing climate conditions.

However, it wasn’t until the end of last winter, that FLECTR truly proved to its designers that it was capable of functioning under all conditions.

We are the “Outsider” team, a group of people who are outdoor and water sports enthusiasts and, most of all, active bikers enjoying a good ride on our mountain and racing bikes. Together we have spent hundreds of hours working on our bikes, optimizing and enhancing look and performance. Every passionate biker seeks the optimal support of his or her bike. Trail seekers look for stability, commuters want an easy and comfortable use, while racing cyclists have sleepless nights over the best possible configuration of their lightweight racing machines. Agreed, the requirements are multifaceted, as is the accessory market trying to serve all those needs, nevertheless there are specific bike parts, where no tangible progress seems to be made. Without being unfair, most conventional wheel reflectors do their job, but all of them come with a downside and there is not even an alternative for flat spokes or sport tires. We all know that conventional wheel reflectors are heavy, bulky and aerodynamic-wise, they are a millstone around one´s neck, respectively one´s bike. They easily become useless in wet conditions and dirt. They get stolen, they fall off, they break. And one thing is sure: They are anything but sleek and stylish. That’s reflecting (no pun intended 🙂 the current market situation and explains why cyclists do without wheel reflectors, although it means a huge compromise from a safety perspective. This realization initiated our project.