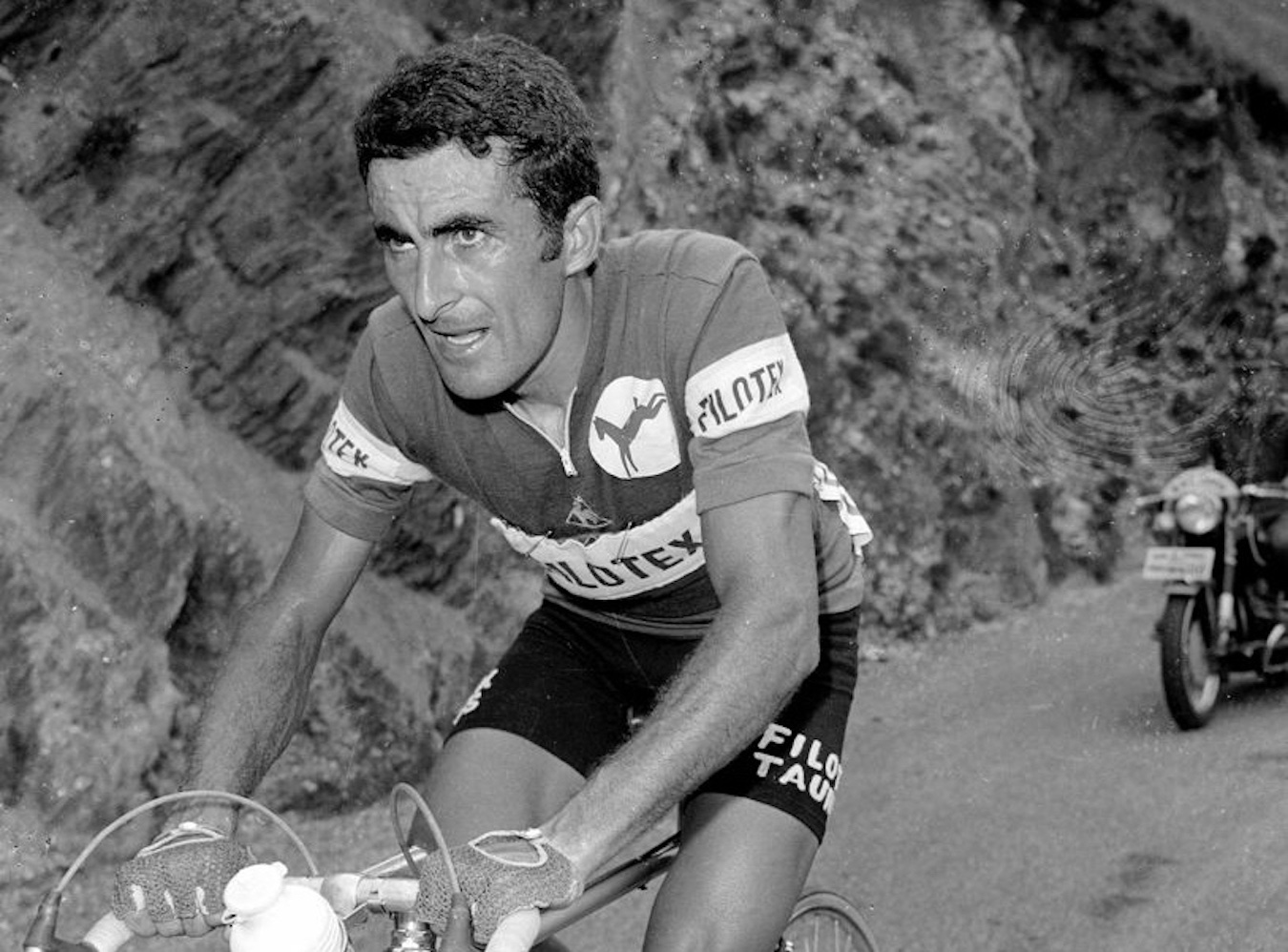 A belated happy birthday to Franco Bitossi, who was born on September 1, 1940.

The Italian rider is best known as one of the very few riders who won both the Mountains Jersey and the Points Jersey in the Grand Tour events.

Additionally, Bitossi also won the 1967 and 1970 Giro di Lombardia, and finished on the podium of the 1972 and 1973 World Championship Road Race, finishing second to fellow Italian Francesco Moser, followed by a third place finish behind Moser again and Dietrich Thurau of Germany.

He also won the Italian National Road Race Championships in 1970 and 1976.

Bitossi was born in Camaioni di Carmignano, Italy, and raced for three years as an amateur before turning professional in 1961, after he had reached the required age of 21.

Bitossi’s first major victories occurred in 1965, when he won both the Tour de Suisse and the Züri-Metzgete, which he later won again in 1968.

1967 marked another important season for Bitossi, where he triumphed in the Tirreno–Adriatico, Giro di Lombardia and Coppa Agostoni, while the following year he became the first Italian to win the Points Jersey in the Tour de France.

Perhaps Bitossi’s most memorable moment was not in victory however, but rather in defeat, after he lost the 1972 World Championship Road Race in Gap, France by only a few meters to his teammate Basso.

“In the final kilometers I was in a group of seven, with [Michele] Dancelli, [Marino] Basso, [Eddy] Merckx, [Cyrille] Guimard, [Joop] Zoetelmelk and [Leif] Mortensen. With three or four kilometers to go, on a little rise, Guimard took off and I followed him. Guimard was dangerous, being very fast. He expected my collaboration but I just drafted him to avoid wasting energy. I was hoping he could “take” me to the line. When he saw I was not working with him he slowed down and the rest of the group reached us”, recounted Bitossi during an interview with Valeria Paoletti a few years ago.

“I was fresh because I had been drafting Guimard, so I took off. I thought: Merckx is a friend and is not going to chase me. Dancelli and Basso are Italian and therefore are not going to try catching me as well. Guimard is tired. There were only Zoetemelk and Mortensen. I didn’t think Mortensen would try to go with me and therefore there was only Zoetemelk to take care of. I thought: “It is done”, he said.

“When I took off nobody followed me and I immediately gained several meters. I thought I was going to be the World Champion. When I turned the last corner, with 1300 meters to go, I looked behind and I saw that the group was 300 meters behind me. In the last kilometer I found a flat part, then a descent, where I really flew. And then there was a little climb. And there is where I made my mistake. Well, my teammates didn’t do much to protect me.. Basso did a huge 600 meter pull at the front of the chasing group and then got Merckx, Guimard and Zoetemelk take pulls as well. Even he later said that in that moment he thought he would never have caught me! Anyway, at the beginning of the climb I changed gearing and used a lower gear. But then I had the feeling it was too light. The line was there, it seemed I could almost touch it. But it never arrived, so I changed to a higher gear and this was my mistake. After 100 meters my legs got stuck”, he added.

“There was another problem. That day was windy. The wind was in my face and coming from the right. While riding that last kilometer I was protected by the people on the right side of the road. But when I realized I was getting stuck I tried to see where the other riders were. I noticed they were really speeding up. I thought there was somebody trying to take off and catch me. But they were hidden by the two referee’s cars and to see them I had to move in the middle of the road, where it was very windy. This slowed me down even more. But yes, if I had changed back by to a lower gear (or if I had left the lower gear) I probably would have been the champion”, Bitossi concluded.

As a result, he was often compelled to stop midway in a stage due to an erratic heart-beat, which plague him throughout his career.

Upon retirement, Bitossi retreated to his native Tuscan countryside, where he started an olive grove which still prospers today.