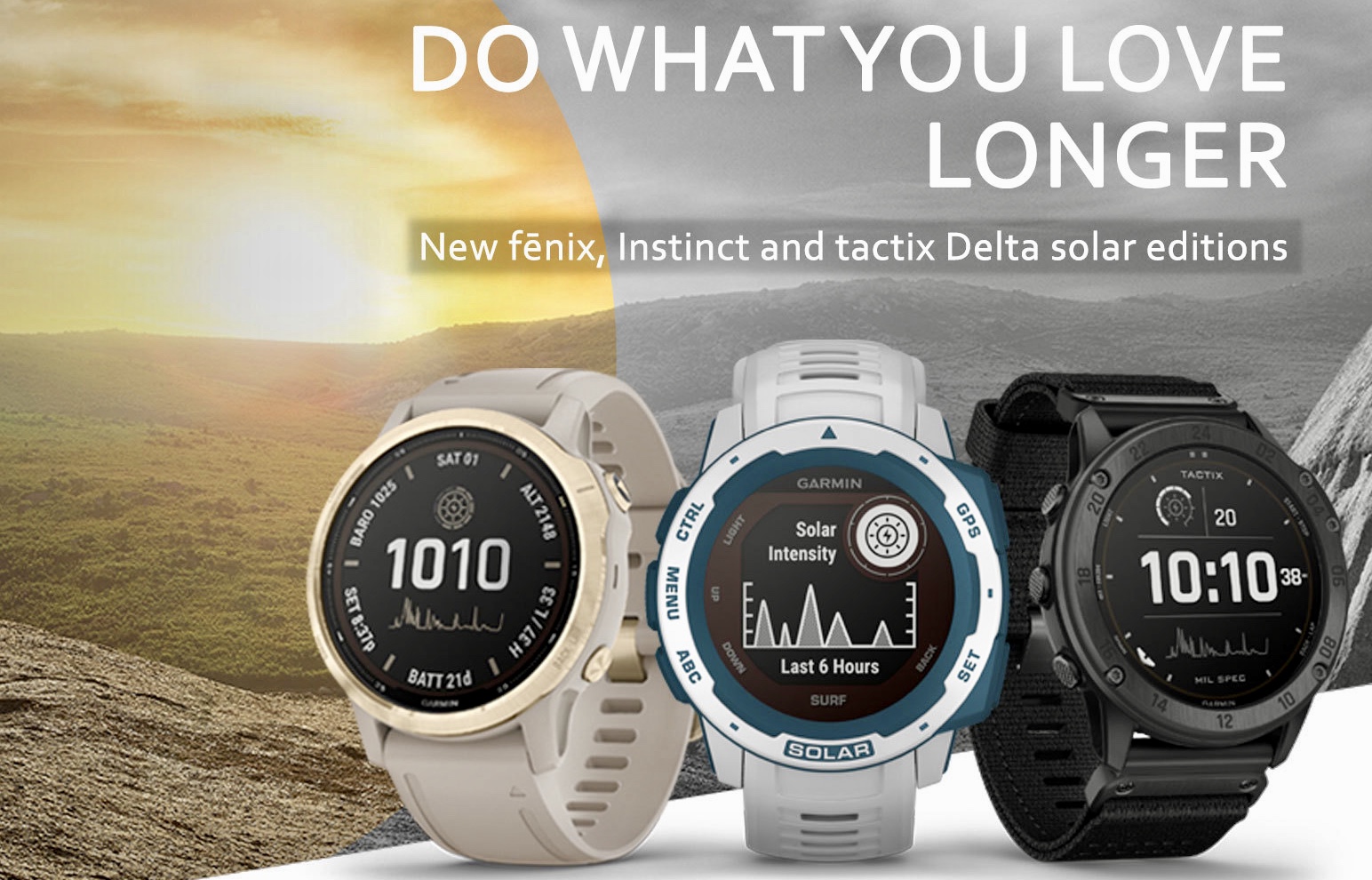 Building on the success of their first solar charging adventure watch, the fēnix 6X – Pro Solar, Garmin has announced the expansion of its technology to the Instinct, fēnix 6 and 6S and tactix Delta adventure smartwatches, allowing customers to “Do What They Love Longer” through significantly increased battery life and new purpose-built functionality including cycling, surfing and climbing  activities.

“Garmin’s multisport GPS watches are the choice for athletes and adventurers willing to push themselves through the next mile or over the next mountain. Using our solar capabilities, the new Instinct, fēnix 6 and 6S, and tactix Delta solar watches provide extraordinary battery life and give customers the ability to follow their passion to the sunset and further,” said Dan Bartel, Garmin vice president of global consumer sales. “In addition to the solar charging capabilities, these editions are full of updated and unique features. From new camouflage design patterns to surfing activity profiles, there is something for everyone with the new members of Garmin’s solar family.”

Since launching in 2018, the Instinct GPS adventure watch series has proven itself as a reliable tool built to endure the most challenging environments, from the city to the mountains and all places between. The Instinct Solar takes its rugged reputation to new heights with astonishing battery life, updated bold designs and new activity profiles, including two new activity-specific Instinct editions, Instinct Solar – Surf Edition and Instinct Solar – Tactical Edition.

The fēnix 6 Series – Solar Editions also includes Advanced Sleep Monitoring, which provides a detailed breakdown of a user’s light, deep and REM sleep stages as well as Pulse Ox and respiration data. This can be viewed on a dedicated widget that includes your stress score and sleep insights. Out of the box, the fēnix 6 series includes topographic maps for outdoor adventures, ski maps for over 2,000 ski resorts worldwide and over 41,000 golf courses. The fēnix 6 series features Garmin Pay and on-device music storage of up to 2,000 songs, allowing users to sync playlists from several of the most popular music services (subscription may be required), no phone required.

With specialized tactical features as well as mapping, music, advanced training and the same smart features from the fēnix 6 family, the tactix Delta – Solar Edition is built for demanding field use and everyday wear.

You can view these new solar wearables at www.garmin.com.