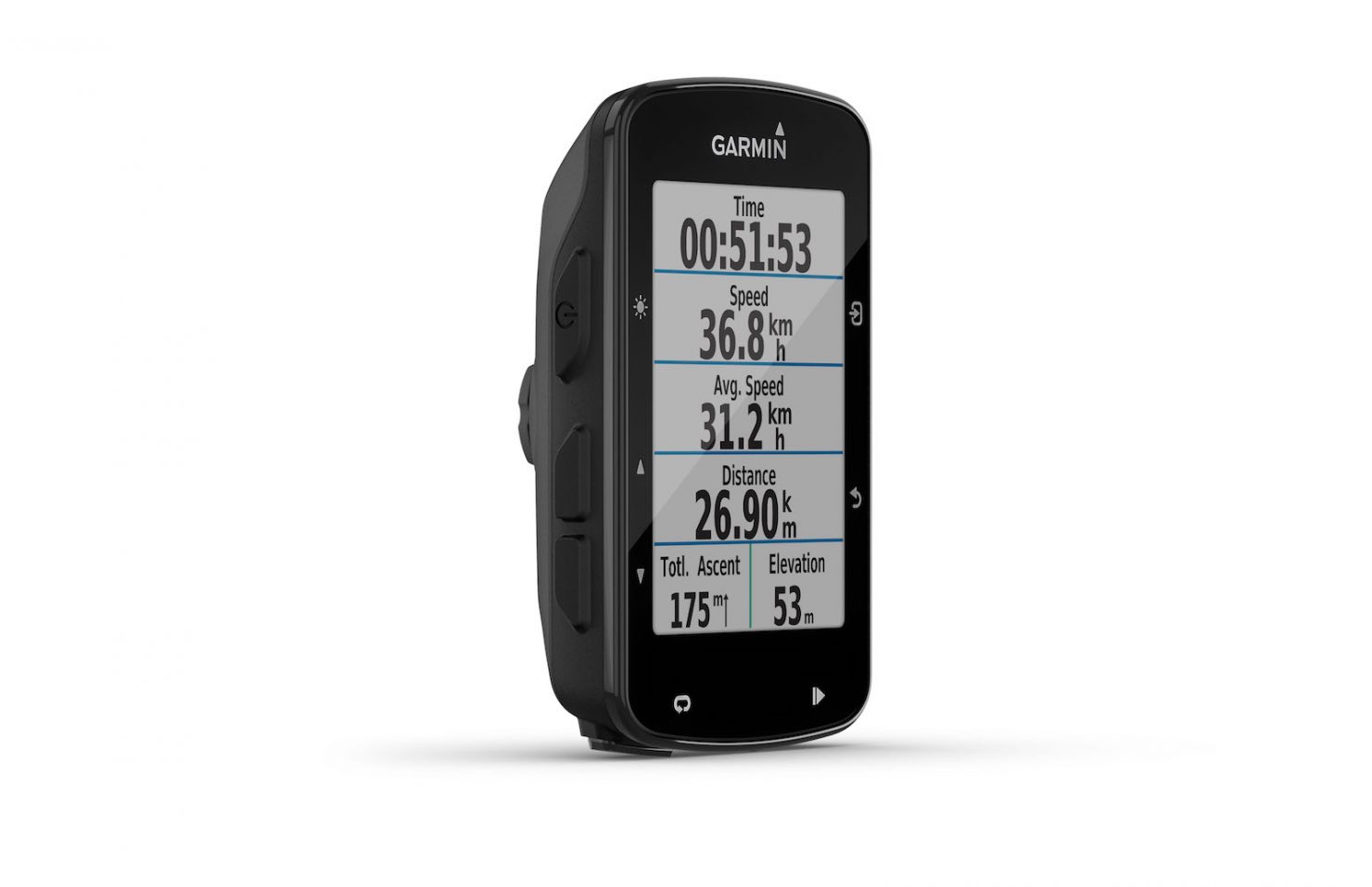 Garmin announced the launch of its new Edge 520 Plus GPS cycling computer today, which features a host of new options that include advanced navigation, performance monitoring capabilities and enhanced connectively for both on and off-road cyclists alike.

Garmin says, “whether hitting the trails or streets, cyclists will benefit from the preloaded Garmin Cycle Maps that feature turn-by-turn directions for all terrains, and alerts to sharp curves ahead.”

“The Edge 520 is one of our best-selling cycling computers, so we wanted to take something our customers know and love and improve upon it,” said Dan Bartel, Garmin vice president of global consumer sales. “Therefore, some of the navigational and safety features once available only on our higher-end models – like the Garmin Cycle Map, rider-to-rider messaging, Incident Detection and more – are now integrated into the Edge 520 Plus.”

The Edge 520 Plus comes preloaded with Garmin’s Cycle Map app that provides turn-by-turn navigation and new alerts that notify cyclists of sharp curves ahead. It will even guide cyclists back to the route, or back to start, if they stray away or decide to head home early.

In addition, cyclists can also plan and download their routes on the improved and revamped Course Creator in Garmin Connect, which uses the company’s Trendline popularity routing app to provide cyclists with the best road, mountain or gravel routes that are aggregated from those most traveled by fellow riders.

The Edge 520 Plus also gives cyclists the freedom to put their phone away and still feel connected via rider-to-rider messaging that lets them send prewritten messages directly from their Edge 520 Plus to other riders using a compatible device. Moreover, built-in Incident Detection will automatically send a cyclist’s location to emergency contacts if they run into trouble, while Garmin’s GroupTrack and LiveTrack lets friends, family and other cyclists keep track of the rider’s location in real time.

The Edge 520 Plus is also compatible with Garmin’s Varia line of cycling awareness devices, including the new RTL510 rearview radar and UT800 smart headlight, which are designed to help  create a safer riding environment by alerting cyclists to approaching cars right on the display.

For cyclists looking for advanced performance monitoring features, the Edge 520 Plus is also compatible with ANT+ sensors,  including speed, cadence and heart rate, as well as ANT+ power meters like the brand’s Vector 3 to track functional threshold power (FTP) and cycling dynamics. Furthermore, while using a heart rate strap, cyclists can see even more physiological data, including VO2 max and recovery time to help users keep track of how their body is performing from ride to ride. Mountain bike enthusiasts can connect the Edge remote control with their Edge 520 Plus to easily start and stop the timer, change the page or mark a lap without taking their hands off the bars.

The Edge 520 Plus also comes with the latest version of Strava Live Segments, providing cyclists with even more competition and segments, wherein cyclists can star their favorite Strava segments, and while riding, will receive an upcoming segment alert as they approach a start. In turn, cyclists  will then receive second-by-second, real-time comparisons of their performance against their most relevant competitor and will race against their actual speeds – not just their average. The Edge 530 Plus also comes preloaded with the Strava Routes Connect IQ app, starred routes can now be wirelessly synced to the new device so cyclists can navigate and compete on their favorite Strava segments at the same time.

For cyclists interested in hitting the trails, the Trailforks app, which can be downloaded from the Connect IQ store, allowing riders to send selected routes to their device from more than 80 countries. Trailforks can also use a cyclist’s riding preferences to recommend nearby routes.

While using the Best Bike Split Race Sync app installed on the Edge 520 Plus, cyclists puts current race plans at the cyclist’s fingertips, allowing the rider to see how changes in weight, power and drag affect their goal race time, while helping to create the perfect power plan for race day.

Additionally, Edge 520 Plus comes installed with the TrainingPeaks Connect IQ app, which can guide cyclists through a workout in real time,  complete with intensity targets and interval durations. After a workout, syncing to TrainingPeaks will provide cyclists with a detailed analysis of their ride, as well as the ability to measure progress toward their goals.

Building upon the first-generation cycling radar from Garmin, the RTL510 rearview radar features improved visibility, detection of vehicles, battery life and more to help keep cyclists safe no matter where, or when, they ride.

“The Varia RTL510 rearview radar is just one of many products in the Garmin ecosystem that’s aimed at increasing cycling awareness,” said Dan Bartel, Garmin vice president of global consumer sales. “There’s a lot that riders have to worry about when on the road, and one of the most important things is their safety. Whether riding during the day or at night, this radar is like having eyes in the back of their helmet, helping to ease some of that anxiety by acting like an early warning system.”

When paired with a dedicated radar display unit or compatible Garmin device, including the new Edge 520 Plus, cyclists will receive both visible and audible alerts warning them of vehicles approaching from behind, up to 153 yards away. During a daytime ride, the tail light can be seen up to a mile away and is visible within a 220-degree range, making it easier for drivers to see a cyclist before the radar sees the vehicle.

Garmin also announced the launched if its new compact and lightweight, yet rugged, Edge 130 GPS cycling computer today as well.

“Don’t let the size of the Edge 130 fool you – this cycling computer is packed with features,” said Dan Bartel, Garmin vice president of global consumer sales. “Not only does the Edge 130 provide cyclists with the ability to create courses in Garmin Connect™, but it’s also compatible with our Varia™ line of cycling awareness devices and includes a suite of smart features1, all in a rugged package.”

Using GPS, GLONASS and Galileo satellites, plus a built-in barometer, Garmin says the Edge 130 can provide cyclists with greater coverage and more accurate ride data so they can view just how far, fast and high they’re riding. Moreover, before heading out, cyclists can download their favorite routes on the improved and revamped Course Creator in Garmin Connect, which uses the company’s Trendline popularity routing app that provides the best road, mountain or gravel routes that are aggregated from those most traveled by fellow cyclists. The Edge 130 also provides easy-to-read course prompts and audible turn cues that guide a cyclist on where to go next. If needed, it will even direct cyclists back to their starting location.

Just like the Edge 520 Plus, the Edge 130 is also compatible with Garmin’s line of Varia cycling awareness products, like the new Varia RTL510 Rearview Radar, UT800 smart headlight and more. In addition, The Edge 130  also supports Bluetooth and ANT+ for additional sensor capabilities, including the Edge remote control – ideal for mountain bikers looking to start and stop the timer, change the page or mark a lap without taking their hands off the bars. For added peace of mind, the Assistance feature can easily send a cyclist’s location directly from the Edge 130 to emergency contacts in case they run into difficulty, while LiveTrack1 lets friends and family keep track of a rider’s location in real time.

The Edge 130 is designed to help increase performance with every ride. When paired with a compatible power meter, users can train even harder and see how many watts of power they’re producing. For added competition, riders can race against Garmin and Strava Live Segments in real time, allowing them to see a second-by-second comparison of how their performance measures up against their competitor, not just their overall average speed.

The Edge 130 also features smart connectivity that means cyclists won’t have to reach for their phone. For instance, text messages will appear on the device screen so cyclists can view them at a glance while continuing to ride. Also, a new weather page can display current and forecasted conditions, as well as weather alerts to help keep cyclists from getting stuck in bad weather.

Additionally, when paired with a compatible smartphone, the Edge 130 can automatically upload rides to the Garmin Connect online fitness community and is customizable by downloading configurable data fields from the Connect IQ™ store.