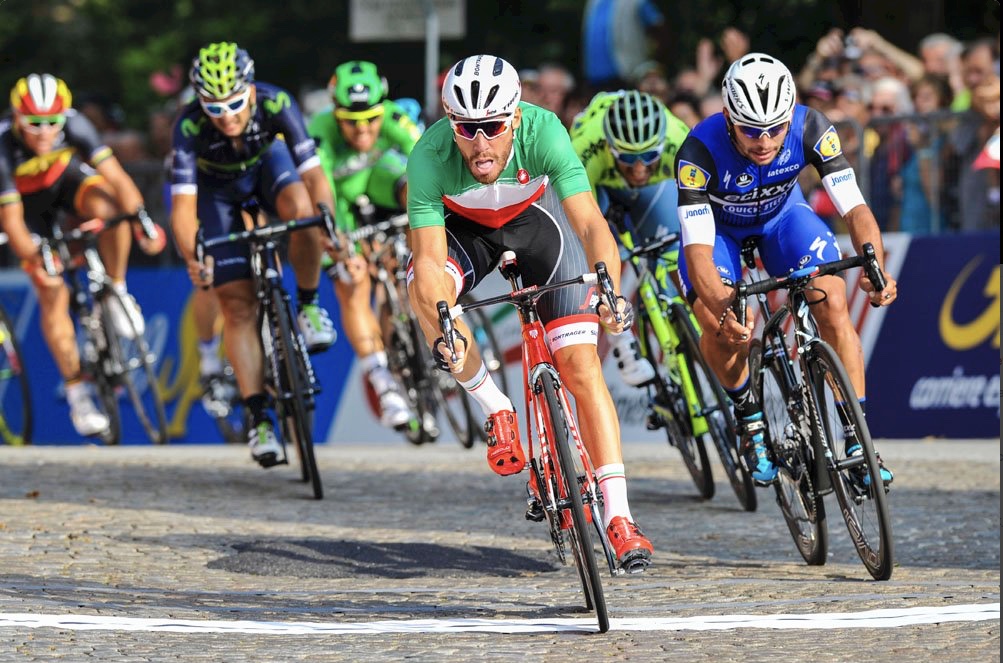 As a member of the Italian national team, national champion Giacomo Nizzolo showed his great form ahead of the World Championship today, as he outsprinted Fernando Gaviria and Daniele Bennati to claim the 100th edition of Gran Piemonte in Agliè.

It was a very fast race with almost 100 kilometers covered in the first two hours.

A 38-rider lead group rode a very high pace before Stéphane Rossetto made a solo breakaway, only to see the France rider reined in with 3 kilometers to go.

“As I woke up feeling unwell, I told [national coach Davide] Cassani that I’d see on the way if I’d be able to race properly or not. But after the initial hill, I felt great in the group of 38. The finale was a pretty technical sprint. I didn’t know the finish so I was close to crashing in the last curve. I’m happy especially because of the great feelings I’ve experienced all the way today. I couldn’t ask for more in my last race before the Worlds. To win such a fast race against rivals of such a high level is fantastic. With the national champion jersey as a member of the national team it’s even better.”

“It’s a great victory because it comes at the end of a race contested at a very high tempo. I’m also happy because I felt great on the climbs,” Nizzolo added. “I couldn’t ask for better timing, winning a race ahead of the World Championships. Now I know that I can go to Doha with great motivation.”

The race got off with a fast pace as the peloton Diano d’Alba, with a group of 38 riders – including Gilbert, Swift and Bennati – breaking clear in the early kilometers.

After two hours of racing, the average speed was a brisk 48.95kph, but the break’s lead was inside 40 seconds, and the unity of the group fragmented soon afterwards. After a flurry of attacking, Stéphane Rossetto (Cofidis) went clear at the end of the race, and opted to press on alone rather than wait for company with just under 100 kilometers remaining.

There was a détente in the peloton as the remnants of the early break were caught, and Rossetto was able to stretch his advantage out to a maximum of 4:40 before the sprinters’ teams began to wind the pace up once again on the run-in towards Agliè.

By the climb of Alice Superiore, Rossetto’s lead was already down to just two minutes, and the work of BMC on the ascent made further inroads into his advantage, and also reduced the main peloton to just 40 or so riders.

Rossetti remained determined during the final 20 kilometers even though there was a sense of inevitability about his fate.

With 10 kilometers to go, his lead had been reduced to just 19 seconds, but it wasn’t until Etixx-QuickStep took up the reins on the approach to Agliè that the gap was eventually shutdown.

After Rossetto was swept up with 2 kilometers remaining, while the scene was set for a sprint finish, with Nizzolo ultimately emerging victorious.