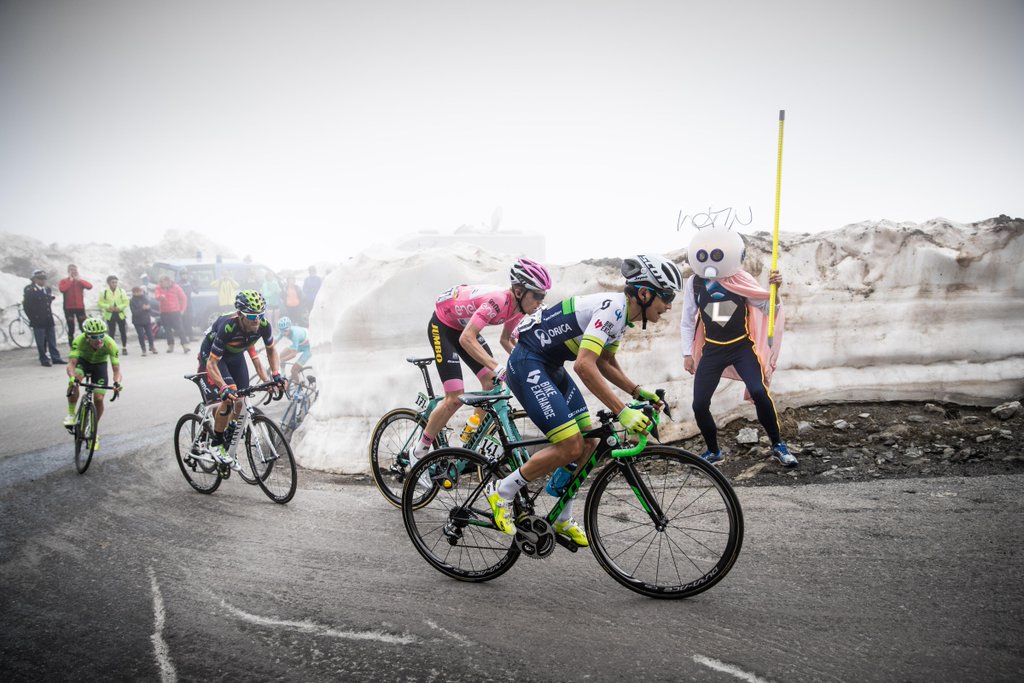 Vincenzo Nibali (Astana) proved his resolve today, by riding into the maglia rosa during stage 20 of the Giro d’Italia, pulling off what seemed to many as an impossible feat just a few days ago.

The Italian rider started today’s stage 44 seconds down on race leader Esteban Chaves (Orica-GreenEdge), but made up the deficit during the penultimate climb after commencing a long range attack less than 15 kilometers from the summit, that served to “crack” all of his major rivals, including Chaves.

Nibali’s ride to victory was set-up by an attack from his teammate Michele Scraponi (Astana) with 17.6km to go. Chaves reacted first, and was also joined by Kruijswijk.

With 12.2km to go, Nibali attacked the group, with only Chaves and Valverde able to follow.

Just 300 meters later, Chaves lost the wheel and Nibali started to pull away from the maglia rosa.

Shortly thereafter, Valverde attacked Chaves, but the young Colombian rider was able to regain contact with the veteran Spanish rider.

Up front, Nibali managed to catch Tangert, who put in a huge turn for his team leader. Soon after, Uran caught up with Chaves and Valverde. National alliances came into play as Uran set the pace for Chaves.

That alliance only lasted as long as Chaves could keep pace, as Uran proceeded to ride  away with Valverde when the Orica-GreenEdge rider couldn’t stay on terms with them.

Chaves, who started the day 44 seconds ahead of Nibali, found himself 55 seconds behind at the summit of the second to last climb.

This gap only went out as Nibali, Valverde and Uran got away. The Kruijswijk group caught up with Chaves and they rode towards the finish together.

Earlier in the day, Mikel Nieve (Team Sky) put himself in the day’s main break, and once again tried his luck with a solo attack. Ascending the huge Col de la Bonette, over in France, the Basque rider got his sponsor plenty of television time.

Back in the peloton, Orica-GreenEdge – the team of leader Esteban Chaves – and Astana massed at the front to control the pace and keep their GC men safe. Before long Movistar came forward and upped the pace. At this point, Nieve had 84km to go and was 10-24 ahead of the main bunch.

Nieve held enough of a gap to get over the classified climbs first and in so doing looks set to win the KOM jersey overall.

Gianluca Brambilla (Etixx-Quick Step) managed to solo his way across to the lead group, which had caught Nieve on a descent with 46km of the stage remaining. At this point the group held 8-34 over the chasing pack.

No sooner had they gone through the intermediate sprint point than they were once again climbing, this time up the final first category climb of the race.

The group lost impetus when Visconti stopped coming through, apparently avoiding taking a turn as he was under instruction to wait for his team leader, Valverde.

Atapuma put in several attacks to keep the Nieve group off their wheels, but by now Dombrowski was also reluctant to go on the front.

Nieve’s day seemed to be done when he couldn’t keep the pace, meaning Tanel Kangert (Astana) and Rein Taaramäe (Katusha) were able to bridge to the Atapuma group.