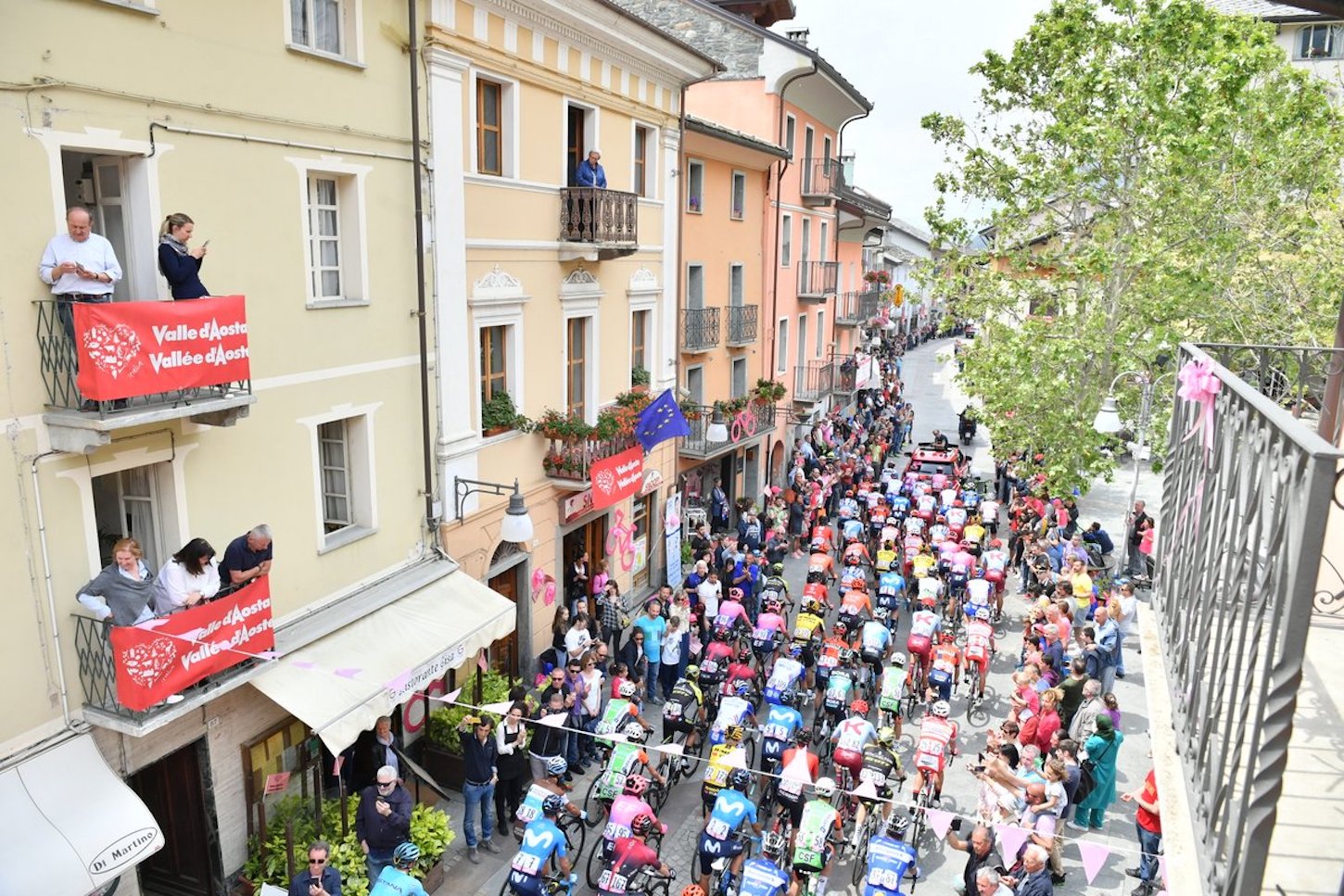 Richard Carapaz (Movistar) won stage 14 of the Giro d’Italia today, after the Ecuadorian rider launched an attack three kilometers from the summit of the Colle San Carlo to claim a solo victory ahead of Simon Yates (Mitchelton-Scott) and Vincenzo Nibali (Bahrain-Merida) who finished more than half a minute down.

As a result, Carapaz wrested the maglia rosa from the shoulders of Jan Polanc (UAE Team Emirates), who eventually finished 7:41 down.

The short but sharp stage got off to an explosive start with the attacks coming thick and fast on the first of five climbs within the opening kilometres. Determined to turn things round after pedalling squares in stage 13, the Vuelta champion Yates had an early pop, his acceleration matched by Roglic, Carapaz and eventually Nibali as the peloton strung out behind.

A 15-man move formed with the blue jersey of Ciccone at its head, the Trek-Segafredo rider strengthening his grip on the blue jersey by cresting the summit of the first climb in pole position.

Things came back together on the approach to the second climb after a temporary ceasefire between the favourites – initiated with a fist-pump between Nibali and Landa – allowed the peloton back into contention, while a strong group of eight riders stole a march up the road.

The return of the peloton reunited Roglic with reinforcements from his thin Jumbo-Visma squad, the Slovenian previously heavily isolated from very early on.

With 62km remaining and the race moving onto the third climb, the two groups merged for form a strong 12-man break which held an advantage of 2’25” over a pack being controlled by the teams of the two Slovenian riders topping the general classification – Poland’s UAE Team Emirates and Roglic’s Jumbo-Visma.

Ciccone made it three from three before breaking clear with compatriot Cattaneo on the Colle San Carlo with the favourites closing in. An increase in tempo had thinned out the pack and seen the likes of Polanc and Friday’s stage 13 winner Ilnur Zakarin (Katusha-Alpecin) distanced.

A quintet of Landa, Lopez, Nibali, Roglic and Carapaz rode clear of the main pack, picking up Caruso and Amador from the break and reeling in Ciccone and Cattaneo, as Majka and Sivakov battled back and Yates joined forces with the American Joe Dombrowski (EF Education First) to limit his losses.

Nibali, Lopez, Landa and Roglic all put in attacks but it was not until Carapaz danced clear with 28km remaining that daylight opened between the front of the race and the chasers.

The gap was 34 seconds for Carapaz going over the summit, with the Ecuadorian stretching that out above the minute-mark as he hit the start of the final climb with 8km remaining.

Yates and Dombrowski rejoined the chasers at the start of the climb and zipped straight past, the Briton then dropping the American in pursuit of the lone leader, who could suddenly dream of pink.

Perhaps unperturbed at the idea of missing out on a pink jersey his Jumbo-Visma squad may struggle to defend, Roglic contributed very little on the final climb as Carapaz’s lead stretched out and Movistar’s clasp on pink looked more and more likely.

And so it was to be: already a winner of Stage 4 in the opening week, 25-year-old Carapaz doubled up with a third career stage scalp on the Giro – plus the coveted maglia rosa. Fourth in his debut Giro last year, Carapaz has put himself in a strong position to make the final podium in Verona.

The Ecuadorian also moved up to second place in the maglia azzurra standings – although he trails leader Ciccone by a massive 102 points in what looks to be a one-sided battle.

Besides Carapaz, the big winner of the day was Yates, who cut his deficit to 5’28” and moved into ninth place, the Mitchelton-Scott rider battling back after being dropped on the day’s major test. While the overall win may be beyond him, Yates will have rekindled his hopes for a possible podium finish with three important summit finishes still left to race in the final week.