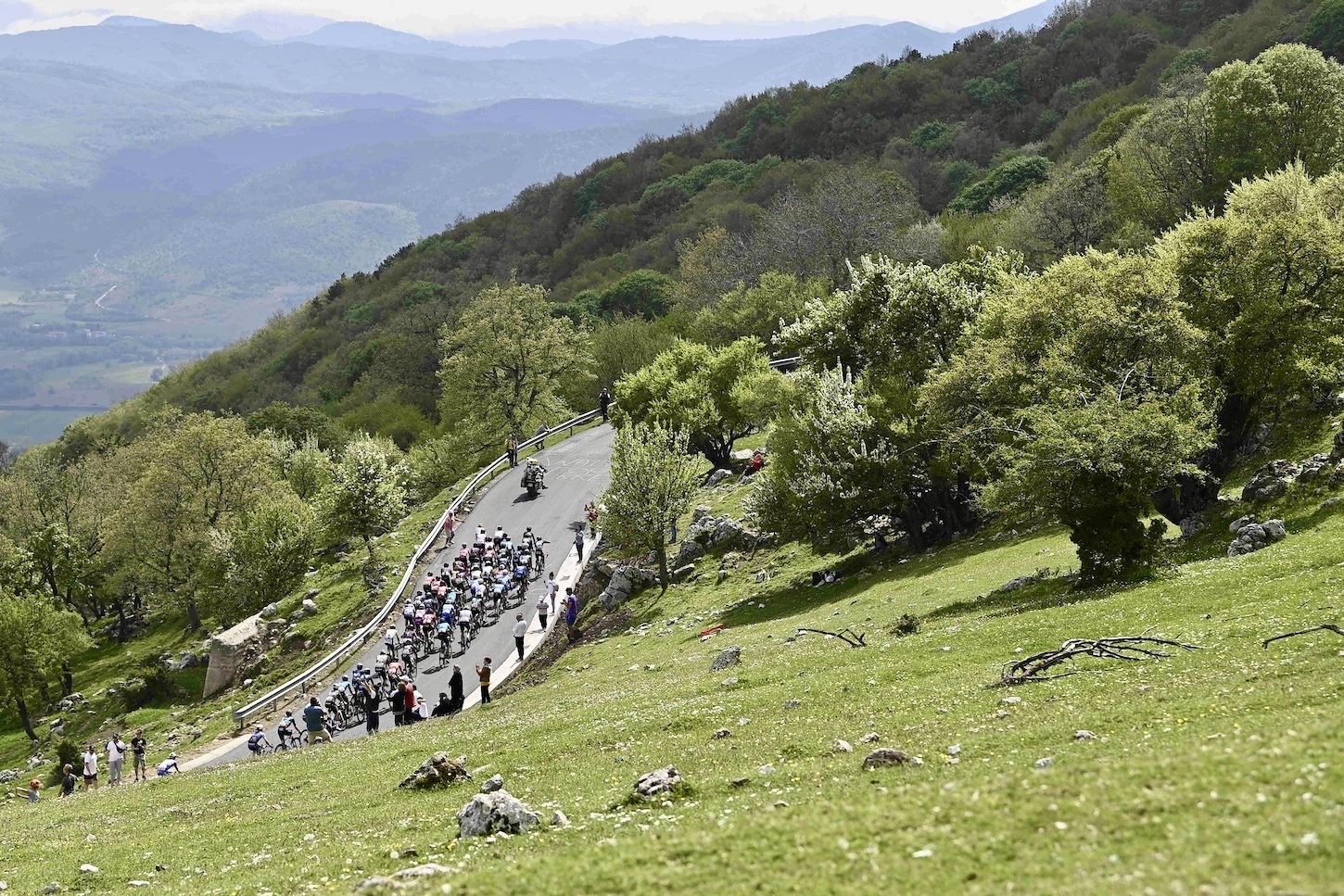 The Southern Apennines saw Jumbo-Visma bounce back from their early disappointments with a maiden Grand Tour stage win for Koen Bouwman and a stirring performance from the Dutchman’s teammate and compatriot Tom Dumoulin.

The 2017 Giro champion was a key cog in the day’s breakaway and then battled back into contention on numerous occasions during a thrilling finale before helping to tee up Bouwman for the win. The 28-year-old Bouwman kicked clear from the wheel of his teammate to make light of the final double-digit ramp to the line and deny compatriot Bauke Mollema (Trek-Segafredo) and Italy’s Davide Formolo (UAE Team Emirates) in Potenza.

The biggest win of Bouwman’s career was supplemented by the blue jersey after he secured maximum points over three of the day’s four categorised climbs – despite being distanced halfway up the final climb of the day following some scattergun attacks from both Mollema and Formolo.

It was the outgoing blue jersey of Lennard Kamna (Bora-Hansgrohe) who led the main field home just under three minutes in arrears as Spain’s Juan Pedro Lopez (Trek-Segafredo) secured the race leader’s pink jersey, which at one point was in the virtual hands of that man Bouwman.

“It’s unbelievable, I can’t believe it – especially after such a hard day,” Bouwman said moments after what was only the second win of his career. “In the final we were four guys with the two of us – and Tom did a superb job in the last two kilometres. I was feeling good but one time on the previous climb I had some troubles.

“But I came back and I was actually confident for the sprint. I’m so happy. It was steeper than I thought but when I started my sprint I felt I had so much power left and I knew I was getting close to the victory. With 50 metres to go I looked behind and I had a big gap – it was perfect.”

Bouwman’s win propels him up to sixteenth in the general classification, 2’19” down on Lopez, who retained his 38-second lead over Germany’s Kamna after a tough day in the saddle. With Dumoulin bouncing back to within six minutes of the race lead after his struggles on Tuesday’s summit finish on Mount Etna, Jumbo-Visma have reignited their options for the days to come.

After a 70km battle played out over an intense two hours, the day’s break finally formed on the second climb of the day, the Cat.1 Monte Sirino, where four Dutchm riders came to the front alongside two Italians and an Ecuadorian.

The principal instigator of the move was Wout Poels (Bahrain Victorious) who rode aggressively from the outset of the 196km stage to put himself in an early move on the first climb of the day, the Cat.2 Passo Colla, which he crested alongside Formolo (UAE Team Emirates).

With tensions high in the peloton on a day that featured over 4,500m of altitude gain, the race soon came back together on a descent that was animated by a brief foray off the front by Richard Carapaz. The 2019 winner went clear with compatriot and Ineos Grenadier teammate Jonathan Narvaez along with Dutchman Mathieu van der Poel of Alpecin-Fenix – although this alluring move was quickly snuffed out when the pink and blue jerseys of Lopez and Kamna came to the front in another eye-catching segment.

The flames were finally doused when the day’s break formed at the start of Monte Sirino, the longest climb of the Giro. Davide Villella (Cofidis) caught compatriot Formolo before Poels bridged over ahead of a four-man chase group of Diego Camargo (EF Education-EasyPost), teammates Dumoulin and Bouwman, and the veteran Mollema.

Maximum points over both Monte Sirino and Monte Grande di Viggiano saw Bouwman move ahead of Kamna in the king of the mountains classification. And with the advantage of the break stretching beyond five-and-a-half minutes, the blonde Dutchman rode into the virtual pink jersey.

Poels was the first of the escapees to feel the pinch, the Dutch veteran paying for his early efforts by being spat off the back on the short but steep climb towards the intermediate sprint at Viggiano.

Behind, the Ineos Grenadiers team of Carapaz came to the front of the pack with 40km remaining to reduce the advantage of the break and all but end Bouwman’s optimistic chances of taking the pink jersey on top of the blue.

With that pink permutation out of the equation, Jumbo-Visma could set about plotting how to use their numerical advantage to secure the stage win.

But it was far from plain sailing – not least after Dumoulin almost found himself floored by his own team car. Dumoulin’s subsequent acceleration on the final climb of Montagna Grande di Viggiano saw both Camargo and Villella dropped before dual attacks from Mollema and Formolo saw Bouwman slip off the back.

Bouwman kept his cool and clawed his way back into contention in time to pip Formolo over the summit and secure yet more points for the maglia azzura standings.

Villella battled back on the descent but was the first to pop on the undulating ride towards Potenza, where the second intermediate sprint came atop a punchy climb in the centre of town inside the final 10km. Twice Dumoulin was dropped after the experienced duo of Mollema and Formolo looked to end Jumbo-Visma’s numerical advantage. But such were the efforts to jettison the 2017 champion that Dumoulin was able to dig deep and return to the fold.

With Formolo eyeing a first Giro stage win since 2015 and Mollema hoping to complete his Grand Tour grand slam, Dumoulin roared back and set a hefty tempo for Bouwman on the flat approach to the final ramp. He then slungshot his teammate to glory to cap a fine day’s work from a team in dire need of a morale boost.

Lopez will wear red, Bouwman blue and Arnaud Demare the maglia ciclamino as the race heads to Naples for Saturday’s intriguing Stage 8, a lumpy 153km ride that concludes with four circuits of a coastal course west of the city center.