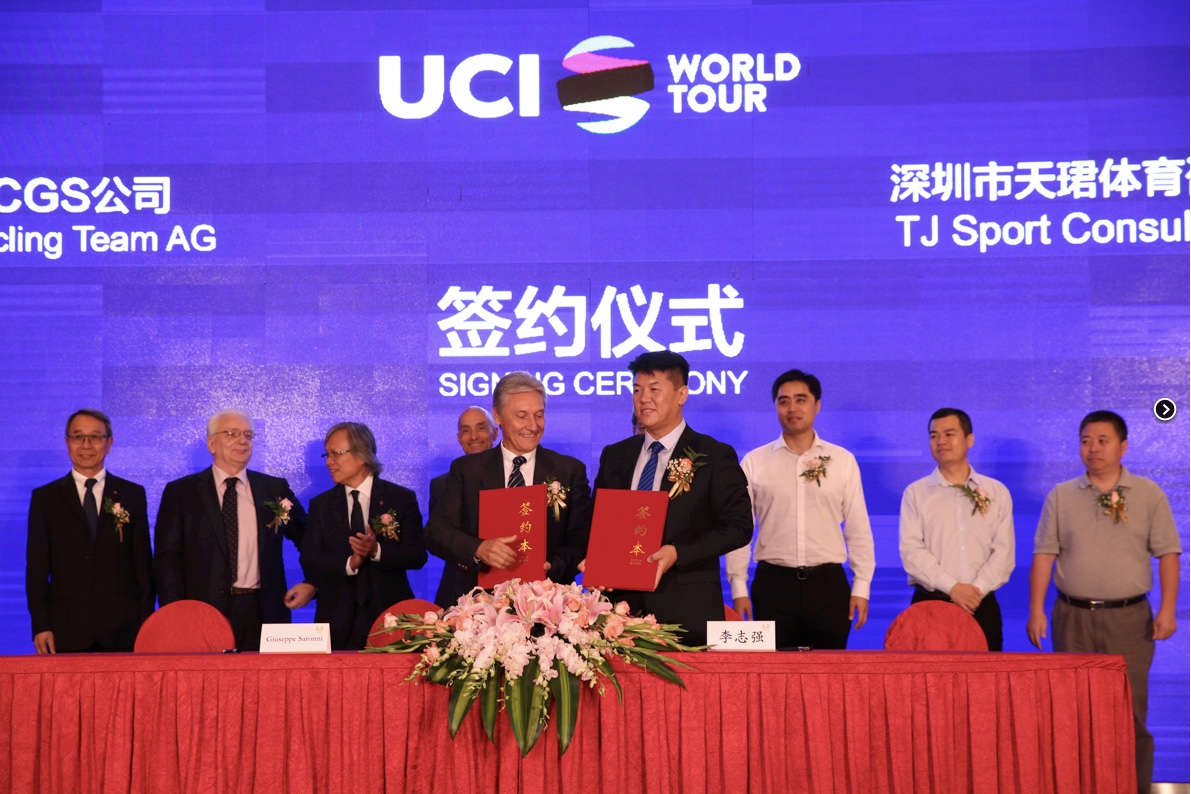 In a detailed interview with the Italian newspaper, Gazzetta dello Sport, Giuseppe Saronni confirmed long-standing rumors that the will head-up a Chinese backed WorldTour team for 2017.

Saronni explained, that his management company CGS Cycling will run the team but the arrival of Chinese funding and a major Chinese title sponsor means the team will be the first ever Chinese WorldTour team in the peloton as it helps develop cycling in the country, and Chinese athletes for the 2020 Olympic in Japan and beyond.

“The team is my new challenge for my sixties…” Saronni said, who turns 59 on September 22, 38 years after winning the world road race title in Goodwood, England with a late attack that saw him surge past Greg LeMond to take the rainbow jersey.

“Unfortunately, it was inevitable that one day there wouldn’t be an Italian team in the WorldTour. I’ve been saying it for the last five years. There just aren’t [enough] Italian companies willing to invest the money needed, for lots of reasons. For that reason, we’ve got to be smart at using resources from elsewhere to help Italian cycling. That’s what we plan to do.”

However, given the team’s Chinese origins, CGS Cycling will be tasked with the heavy development and promotion of cycling in China, just as Team Sky has done in Britain.

“The government decides everything and in our case it’s the Ministry of Sport,” Saronni explained. “We haven’t had direct contact but via TJ sport – a fund created to find resources for the project. In 20 days they’ve gathered 120 million Euro and amongst the brands involved are (online retailer) Alibaba, (clothing brand) J-one, Wanda Sport (the owners of Ironman triathlon series and Infront the sports media giant interested in professional cycling). There’s a fight to become the team’s title sponsor.

“China wants to develop every aspect of cycling. They’ve got to invest in social programmes and the team is only the top of a vast programme that has a price objective: Get Chinese people cycling again. In China there are cars everywhere but also pollution, obesity is a growing problem.

“We’ve been linked to China for a decade and we signed the first Chinese rider and our clothing is already from Champion System. We’re a trusted partner and Mauro Gianetti has excellent relations there. When the government launched its programme, they asked us to get involved. They want us to help develop their riders and coaches, some will train with us to learn more and we’ll go to China to teach them. In a few years we hope to have a Chinese rider who can do show something at the Tour de France. With this project they want to show the world that ‘were coming too and that there’s a Chinese WorldTour team.”

“The licence will be Chinese because the sponsor will be Chinese. But we haven’t sold the team to them, even if that could be a possibility in the future. The team structure will remain the same and I’ll be the manager. By keeping the same management company, we’re certain to be in the top 16 in the ranking and so have a WorldTour licence. We’ll keep all the contracts with the riders that have already been signed.”

The riders currently under contract this year with the Lampre-Merida team, such as Sacha Modolo and South Africa’s Louis Meintjes, will likely remain part of the new team, as will Rui Costa and Diego Ulissi, who have already signed new contracts for 2017.

Additionally, Saronni confirmed that the new team will be sponsored by Colnago and Champion System clothing.