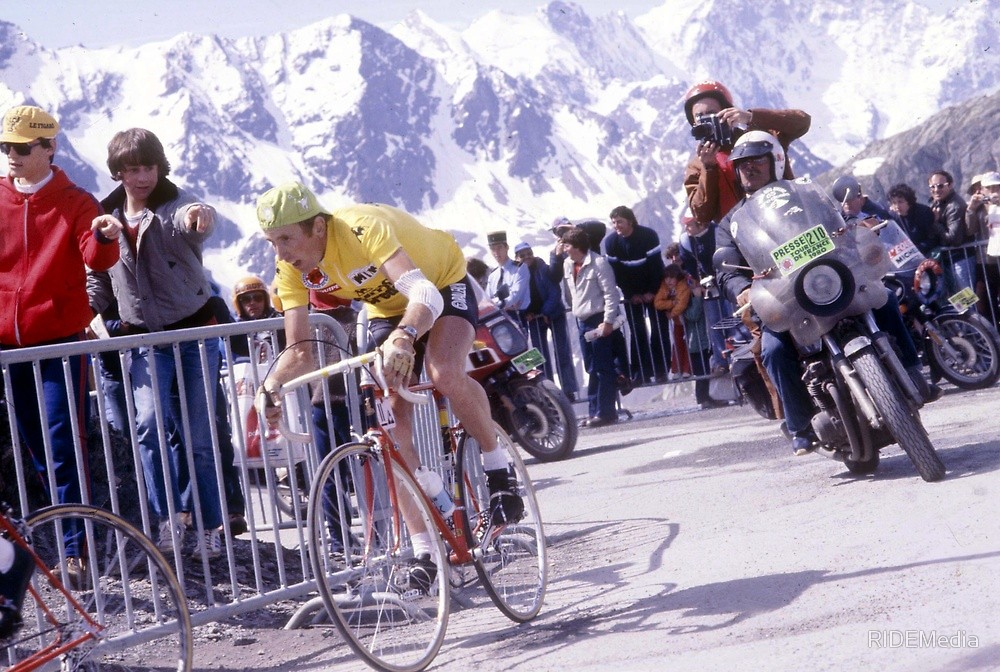 A belated happy birthday to Hendrik Gerardus Joseph “Joop” Zoetemelk, who was born on December 3, 1946.

The Dutch rider is regarded as one of the most versatile riders of his era, capable of winning stages in Grand Tour events, One-Day Classics and special races like the World Championship Road Race.

But, perhaps Zoetemelk’s greatest claim, is the fact that he placed second in the Tour de France a record six times before finally winning the French Grand Tour in 1980 ahead of Hennie Kuiper of Holland and Raymond Martin of France, after Bernard Hinault was forced to abandon because of knee problems.

In addition to his Tour de France palmares, Zoetemelk won the Vuelta a Espana in 1979 ahead of Francisco Galdos of Spain and Michel Pollentier of Belgium. He also won the Mountains jersey in the 1971 Vuelta as well. In addition, Zoetemelk’s was the first Dutch rider to wear the Polka Dot Jersey as the King of the Mountains in the Tour de France.

Zoetemelk also proved himself to be formidable Classics rider as well, winning Paris-Roubaix three times, the Paris-Tours race twice plus the Fleche Wallone and Amstel Gold races. He also racked up an impressive list of achievements in the World Championship Road Race, including a fifth place finish on three occasions, fourth place on two occasions, and finally victory in 1985.

Perhaps Zoetemelk’s most epic moment was when, after suffering a skull fracture during a race in France in 1974, which subsequently led to a  coma, he emerged from his injuries to win the 1975 Paris-Nice classic, beating cycling luminary Eddy Merckx.

Zoetemelk’s first slew of victories came in 1974, after he won his first Paris–Nice Classic, the Semana Catalana and the Tour de Romandie. Later that year however, he was involved in the previously mentioned crash during the finish of the Midi Libre in Valras-Plage, France, which left him close to death.

Zoetemelk returned next season to win the Paris–Nice race for the second time, but illness would again plague him, after he contracted meningitis.

He nevertheless recovered and went on to win twenty races that season, including his third Paris–Nice, the Tour of Holland and the Dwars door Lausanne, as well as a stage in the Tour de France.

The following year, Zoetemelk won the prestigious La Flèche Wallonne Classic, followed by victories in the Grand Prix d’Automne in 1977 and 1979.

These titles were attended by a series of near-wins in the 1976 and 1982 World Championships, before triumphing in the 1985 race, which earned him the distinction as the oldest rider to claim the Rainbow Jersey at age 38.

Zoetemelk career is not without controversy however, as he failed a series of doping tests during the Tour de France in 1977 and 1979.

He also tested positive in 1983. But, in view of the fact that blood doping was not considered a major infraction during that era, he mostly escaped punishment.

Zoetemelk went on to marry Françoise Duchaussoy, daughter of Tour de France executive, Jacques Duchaussoy. They owned and ran the Richemont hotel in Meaux, near Paris for many years.

In retrospect, Zoetemelk was named the greatest Dutch rider of all-time by the Dutch Cycling Federation in 2005, which dictated a statue of him in Rijpwetering, where he was born and grew up. He was also named sportsman of the year in the Netherlands in 1980 and 1985.

Additionally, Zoetemelk was awarded the Gerrit Schulte Trophy nine times as best rider of the year, more than anybody else in Dutch professional cycling history.