History of the Keirin in Track Cycling 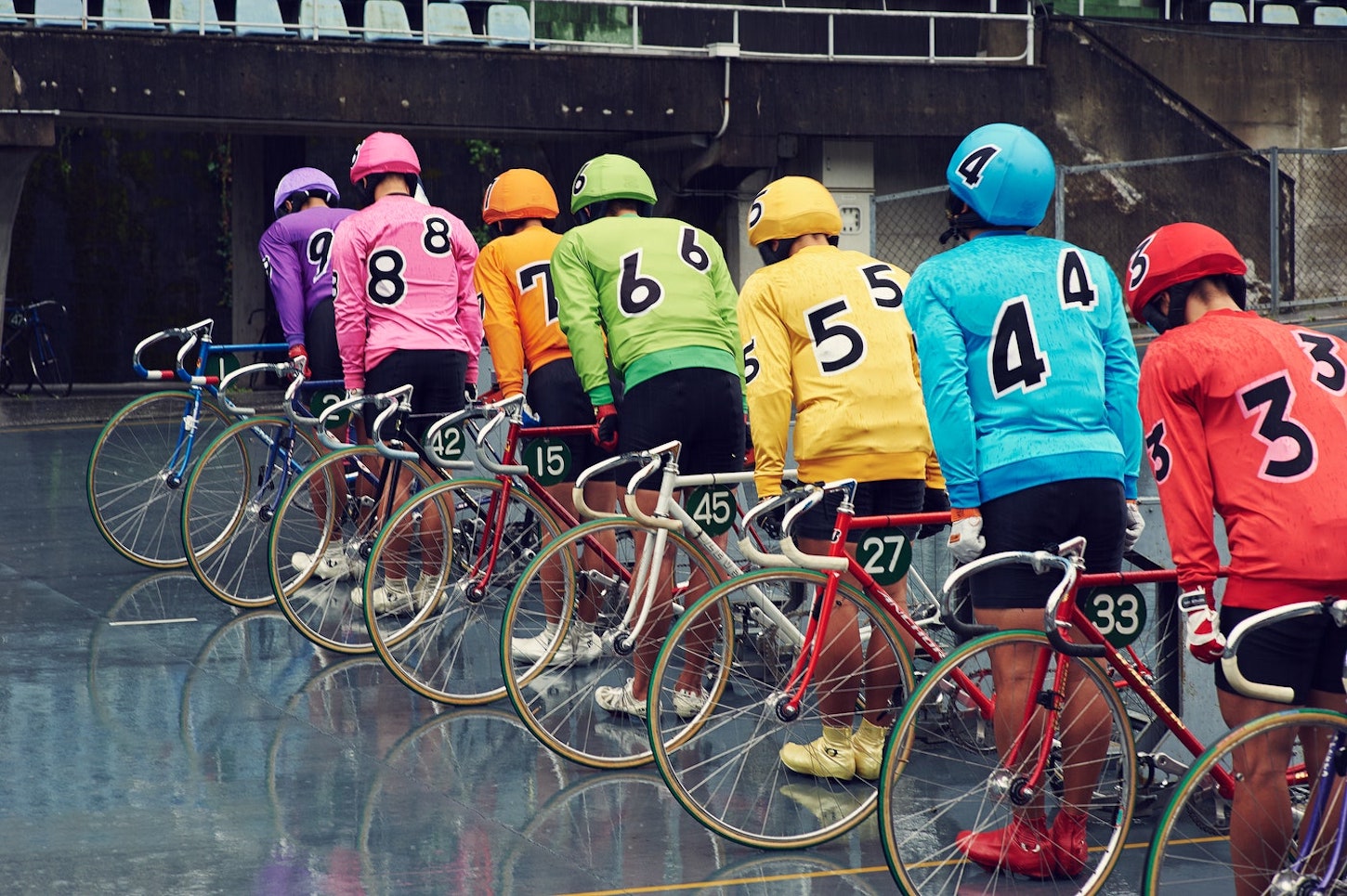 The Keirin is a mass start track cycling event in which 6 to 9 sprinters compete at one time in a race with a paced-start. Riders draw lots to determine starting positions and start as the pacer (which could be a motorcycle, a derny, or a tandem bicycle, for example) approaches. The riders are required to remain behind the pacer, which starts at the deliberately slow speed of about 25 km/h, gradually increasing in speed and leaves the track approximately 600-700 meters before the end, at a speed of about 50 km/h. The first cyclist to finish the race is the winner (sometimes finishing at 70 km/h).

The Keirin is probably the most popular track cycling event at the Olympics since its introduction at Sydney in 2000. The sport originated in Kokura City of Kyushu Island, Japan in 1948, after the approval of the Bicycle Racing Law which was used to help rebuild cities devastated by war using event profits. The city of Kokura had been laid waste by the US bombing (it was supposed to be the site for the world’s first plutonium bomb attack however as the pilot couldn’t see the target visually the B-29 went to the second target of Nagaski – killing over 100,000 people) and was the first local authority to hold keirin events as a means of financing the reconstruction of the city (The only publicly managed gaming event from before World War II was horse racing, which resumed in October 1946).

The first Keirin race meeting was held at the Kokura Velodrome on November 20, 1948 attracting over 55,000 spectators from a war-damaged city of 180,000 people. The wagers (sales of the betting tickets) totaled 19.73 million Yen and with this success, beyond all expectations, other local governments scrambled to put their own events together. The next big racing event was held at Osaka Bicycle Velodrome over six days in December, attracting 67,000 spectators and wagers totaling 36.82 million Yen.

Within 4 years there was 54 new cycling tracks and over 6,000 registered cyclists (including 600 female cyclists, each signed up at the Bicycle Promotion Federation in Ginza in downtown Tokyo). The boom was so fast that the Ministry of Commerce and Industry had to restrict the issuing of construction permits and it became a huge betting enterprise with 38 local federations with tens of thousands of employees.

The sport has become a Japanese social institution with attendance at around 57 million spectators every year and total betting at over 1.15 trillion Yen. It is also very popular in Korea. To get a sense of what it is like, think of the public perception of the Keirin being closely compared to greyhound or horse racing in Europe and North America. Today there are about 3800 registered riders, classified into “S-class” and “A-class” depending on their performance, whereby “S-class” is superior to “A-class”.

In “S-class” , there are about 860 riders, with the “S-class” only events called “Grade Race” which include the “Keirin Grand Prix” held every year on the 30th December (championship prize money is 100 million yen), GI, GII and GIII.

To give some perspective you will find this article by CyclingTips – Keirin Racing in Japan with Shane Perkins (2011 World Champion in the event and Aussie Olympian) – fascinating.Races take place every weekend with ticket entry costing only 100 yen (one US dollar) with 11 races per night.

While placing a bet you will see the background of each rider, his blood type, astrological sign, thigh measurements in addition to starting position and seasonal form. The Japanese Keirin circuit is so lucrative and prestigious for the Japanese, that racers typically do not compete as international medal contenders for this event.

Indeed, Koichi Nakano was one of the first Japanese riders to compete outside of the country and won the World Championship titles in the sprint event for ten years in a row (1977-1986).

“It’s like NFL footballers on bikes – everyone wears pads and big helmets so it’s a mixture of boxing and NFL together. There are headbutts thrown and they’re throwing their bikes on the edge of crashing. You’ve got to think quite quickly and it can get pretty dangerous, which is why the padding is used‘ – Shane Perkins.

Today, aspiring riders compete for entrance into the Japanese Keirin Schools, with only 10 per cent of applicants reaching the strict, 15-hours per day, training camps. The whole system is run like a professional examination with only those racers passing the graduation exam and approved by the Nihon Jitensha Shinkokai allowed to ride in the sanctioned events.

Keirin races in Japan begin with the cyclists parading to the starting blocks, bowing as they enter the track and again as they position their bikes for the start of the race. Every participant is assigned a number and a colour for identification and betting purposes.

At the sound of the gun, the cyclists leave their starting blocks and settle into a position behind the pacer, who is another keirin bicyclist wearing purple with orange stripes. Cyclists initially settle into different groups, referred to as “lines”, where they try to work together with others to maximize their chance of winning.

As the pace quickens, the pacer will usually depart the track with between one and two laps remaining, though the actual location where the pacer leaves varies with every race. With ​1 and half laps remaining, officials begin sounding a bell or gong, increasing in frequency until the bicyclists come around to begin the final lap.

Keirin ovals are divided into specific areas: The two straightaways (homestretch and backstretch), the four turns (corners), and two locations called the “center”, referring to the area between corners 1 and 2 (1 center) and corners 3 and 4 (2 center).

The race is monitored by referees. Two of the referees are stationed in towers along the backstretch (2nd and 3rd corners), while others review the homestretch area from a control room using closed-circuit cameras. Once the race has finished, a referee can signal a possible rule violation by illuminating a red light at the corner nearest to where the infraction may have occurred, or by waving a red flag. Judges then examine the video of the race and decide if a competitor committed a rules violation and should be disqualified. Once the order of finish is finalized, the race is declared official and the winning bets are paid.

There are a total of six ranks that competitors can obtain in Japanese keirin racing. SS is the highest rank, followed by S1, S2, A1, A2 and A3. All new keirin graduates begin their careers with an A3 rank and work their way up by competing in keirin events.

The color of the shorts worn by each keirin competitor indicates rank. Those in A-class (A1, A2, A3) wear black shorts with a green stripe and white stars. S-class competitors (S1 and S2) wear a red stripe instead of a green stripe. Those in the elite SS class wear red shorts with a black stripe, white stars and special insignia. Introduced in 2007, the SS ranking is assigned by the NJS every December to the top nine Keirin athletes. These nine compete in that year’s Keirin Grand Prix and retain their rank until the following December.

The distance of each race depends on gender and rank. For men, distances for those ranked A3 are at 1,600 meters, while all others compete at 2,000 meters. The finals of some of the top graded events are run at a longer distance of 2,400 meters. The season-ending Keirin Grand Prix is held at 2,800 meters.

All events for women are currently run at 1,600 meters. There are usually small variances in distance based on the size of the track.

The GP grade designation is reserved for the Keirin Grand Prix, a three-day meet held at the end of December for the year’s top keirin competitors. The meet ultimately concludes with the Grand Prix race itself, which determines the annual Keirin racing champion.

As of 2018, a selection committee determines the competitors for the Grand Prix race using the following priority:

Also part of the Grand Prix meet is the Young Grand Prix, which is open to the best of those that have begun competing in Keirin within the last three years; it is the only Keirin race of the year in which both S-class and A-class compete in the same race. A new addition to the meet in 2012 was the Girls’ Grand Prix for the sport’s top female competitors.

Another prestigious event on the annual keirin racing calendar is the GI Japan Championship. Held every May over a period of six days, it is the longest single race meeting of the year.

Each of the keirin velodromes are generally permitted to host one event per year of either GI, GII or GIII designation. The remaining events at each track consist of a combination of FI and FII races for a total of approximately 70 race days per year. On average there is one GI or GII event every month and one GIII meeting per week on the annual calendar.

As a result of the parimutuel gambling that surrounds keirin racing in Japan, a strict system of standards was developed for bicycles and repair tools. The Nihon Jitensha Shinkōkai (Japanese Bicycle Association or NJS) – now under the JKA Foundation – requires that all keirin racers in Japan ride and use equipment that meets their standards. All riders use very similar bicycles, so that no rider will have any advantage or disadvantage based on equipment. In addition, all riders must pass strict licensing requirements.

Those who wish to race in Japan must attend the Japan Bicycle Racing School where they learn the necessary rules, etiquette, and skills. The school typically accepts only 10% of applicants. Those who pass final examination must still be approved by the Japan Keirin Association.

All bicycles and equipment must be built within strict guidelines set by the NJS, by a certified builder using NJS-approved materials. The products are then stamped by NJS and only equipment bearing this stamp may be used. Exceptions to this are a very limited set of equipment including carbon wheels, tires, stems and saddles used in Girls’ Keirin, which can be used without NJS certification. The NJS standard is to ensure that no rider will have any advantage or disadvantage based on equipment and does not necessarily relate to quality or standard of manufacture. For example, 36 spoke wheels are allowed but not 32, although 32 spoke wheels are typically lighter, and frames must be built by a very limited number of approved builders.

Because the NJS’s main objective is supporting the Japanese cycling market, its bureaucracy is notoriously critical of foreign manufacturers attempting to enter the Japanese market. The Italian cycling equipment manufacturer Campagnolo has, though, received NJS certification.

NJS-approved equipment is not required for keirin races sanctioned by the Union Cycliste Internationale or its local national sporting associations, including UCI-sanctioned races in Japan.

Bets that can be made on Keirin races include, but are not limited to:

Some wagers cannot be placed if there are a smaller number of competitors in the race.

During major race meets, some jackpot wagers are offered:

The money bet into the Dokanto wagers can carry over if there are no winning tickets, even to subsequent race meets at another velodrome in the country.

In extraordinary circumstances, races have been declared no-contests, forcing velodromes to refund millions of yen in bets. Such results are generally known as a failure (不成立, fuseiritsu). A race at Shizuoka velodrome on January 2, 2008 was declared a failure when the back wheel of the pacer’s bicycle nicked the bicycle of an actual competitor, causing him to fall.

In a race at Iwaki-Taira Velodrome on December 14, 2008, separate infractions resulted in the disqualification of the entire field; all but one of the competitors were handed a one-year suspension by the velodrome after the race.