How PeopleForBikes is Changing with the Industry 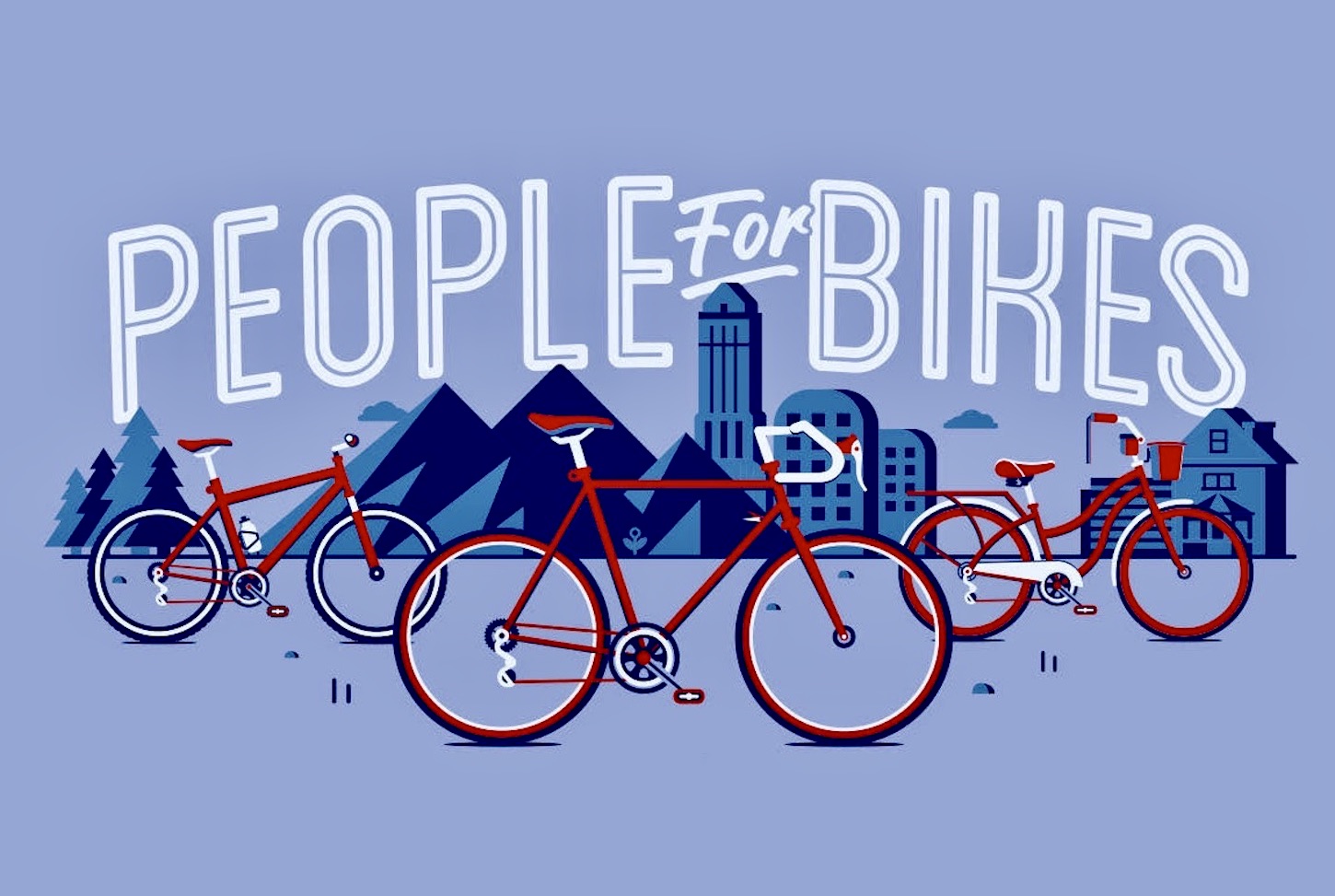 Most people around the American cycling scene are at least vaguely aware of PeopleForBikes (PFB). We see the PFB logo on a tee shirt or cap or a bike jersey here and there. We hear the name in the cycling press now and then – usually about some sort of broader community effort or political initiative. But many people don’t really understand exactly what PeopleForBikes is – what the organization consists of, and what it actually does to help us, as either enthusiasts or serious cyclists? Below, we explore the mission and activities of PFB against the broader backdrop of changes going on in cycling today. We also ask what we as cyclists can do to help the organization?

PeopleForBikes is an industry coalition made up of 280 cycling-industry members, and some 1,000 Ride Spot retailer members, along with a cycling community of almost 1.4 million individual riders. It was founded in 1999 (originally known as “Bikes Belong”) by a group of bike industry companies, to promote stronger representation in congress and coordinated advocacy programs – to help develop and promote economic policies that benefit bike businesses. Retiring CEO Tim Blumenthal has led the organization and overseen its growth for most of that time.

The organization has a number of both short-term initiatives and broader and longer-term goals and objectives geared to promoting the use of bikes for recreation, fitness and transportation, and to improving the local programs and infrastructure that will incentivize more cycling. But to summarize it, as the newly installed CEO, Jenn Dice, says, “It’s actually pretty simple. It all boils down to just getting more people riding bicycles more often, and trying to make bike riding better for everyone.”

PFB is governed by a board of directors comprised of leaders from all sectors of the bike business, including top executives from companies like Shimano, REI, SRAM, QBP, and Trek. The organization is funded by participating members of the bicycle industry, various foundations, non-endemic partners, and a wide range of individuals with an interest in bicycling and healthy living. It is organized for tax purposes as a 501c(6) trade association, under which it does its lobbying, business activities, and political advocacy program. Most of its fund-raising through a sister 501c(3) charitable foundation, through which tax-deductible donations can be made. The foundation then turns around and funds much of the organization’s infrastructure and city work – most of it specific projects on the ground. “In day-to-day practice though, most people don’t care if it is the Coalition or the Foundation, they just think of us a PeopleForBikes,” says Dice.

Dice has been around the bike business for quite a while. She joined PFB in 2013, after serving in the government affairs post for 12 years at the International Mountain Biking Association (IMBA). She is taking over the organization at a time of both heightened interest and uncertainty in the industry. As retiring CEO Blumenthal recently told BRAIN, “It’s a tough situation. We’ve got more going on than ever before and we are going to need to add a few people at a time when a lot of businesses are contracting.”

The continuing COVID-19 pandemic is proving to be something of a golden age for bike industry – with sales exceeding all past records, inventories in short supply or non-existent, and millions of new customers demanding bikes. More and more people have dusted off the old bike in their attic, bought a new bike to get some solitary exercise, or to commute to work and avoid large crowds. Bike shops have been working at a fever pitch, and general retailers like Walmart and REI are selling out of inexpensive bikes. There is also evidence that the used bike market is way up as well.

“Despite everything, there are lots of encouraging numbers to look at,” says Dice. “Our Ride Spot app is up about 90 percent; last week we had almost 2,000 new subscribers. There are a lot of new people riding bikes, and in that regard, these are really super exciting times.” But the key, says Dice, is to make sure we sustain the momentum. “We have to leverage the political power of all these people who are falling in love with their bikes. We have to let our mayors and other leaders know the importance of continuing to build bike infrastructure. And we need to thank them for what they’ve done during the lockdown for bikes.”

How does Dice see this situation unfolding in the future as we eventually emerge from the pandemic? “My vision is to emerge from COVID with the bicycle in a stronger and better position for the long term. We want to see more money from Congress, stronger incentives for mobility programs at the state level, more attention to the booming area of electric bikes and the environmental and congestion problems which some of these initiatives could help to address.” And many American cities are sitting up and starting to take notice – to recognize that open streets, pop-up bike lanes and slower speed limits are positive developments – something that many major European cities did a decade or two ago.

Dice underlines the importance of the stability and continuity of the organization. “Tim and I have basically been working hand-in-glove for many years. We have always been closely aligned on our priorities and programs, and so while he is retiring, I don’t really see the organization undergoing a lot of changes.”

Nonetheless, in the next breath, she points to several new initiatives that she plans to undertake. Primary among those is transitioning the organization to be more of a standard industry trade association, in addition to its historical advocacy work. PFB’s 2019 merger with the Bicycle Product Suppliers Association (BPSA) created a much stronger presence in the industry, and the combined organization has since added some 70 totally new industry participants. Dice says, “We want to move towards becoming a more modern-day, technology- and data-driven, real industry trade association. That includes providing better and more timely data and business insights for our members, regular industry surveys, benchmarking ourselves against other industries – all those sorts of activities that a standard trade association does, in addition to our traditional advocacy role.”

She cites PFB’s Research and Statistics Subcommittee and its recently finalized development of a Business Intelligence Hub – a service that provides a comprehensive package of ridership, retail sales, consumer behavior data that will basically serve as a weekly snapshot about the state of the bike business and general bicycling activity across the U.S.

But Dice also emphasizes that PFB is not going to undertake all these various initiatives completely on its own. “I have always been a big believer in facilitating engagement and inclusion. Engagement is my middle name.” She points out that PFB owns the Bicycle Leadership Conference (BLC) – perhaps the bike industry’s most prominent leadership gathering – and emphasizes the guidance and insight which that forum provides. “We are going to host all kinds of leader gatherings, regional e-bike summits, state infrastructure planning meetings, you name it,” says Dice. “Of course, we’re going to put our heads down and get the work done, but we are also going to try to bring everybody along with us. Our members need to have some skin in the game too, if we’re going to be successful.” And in terms of the inclusion objective, Dice says, “The events of the past couple months have taught us that we need to do better at that in literally every category.”

Another more subtle, but interesting and perhaps longer-term effect of the pandemic has been the incipient connection and evolving common ground between the biking and outdoor sports industries and the more traditional environmental movement. That general commonality has always been there, says Dice, but now it is coming more to the forefront – the growing realization that riding a bicycle can be a key solution to some real social infrastructure and environmental challenges.

“Bikes are not just about fun or exercise or mobility – they are also a way to get to your job or your destination. Greater use results in cleaner skies. Look at what is happening in major European cities – bike purchasing incentives, Paris reclaiming the streets from cars, the U.K.’s recent announcement that it will spend £2 billion ($2.6b) on new bike infrastructure, and so on. Sure, the political and cultural situation in the U.S. is a little different, but we sure need to watch and learn from programs and successes in other countries.”

So what can readers – both serious racers and enthusiast riders – do to help support the activities of PFB?

But most importantly says Dice, “encourage and inspire more of your friends and neighbors to get out there and ride. Help us keep this current biking boom going by being a bike ambassador. Get involved in your local communities and work with your town to build and maintain more bike lanes, bike parks, and generally promote bicycling. Be a voice!”

There is little doubt that Dice will be an important and enthusiastic voice for the industry going forward.