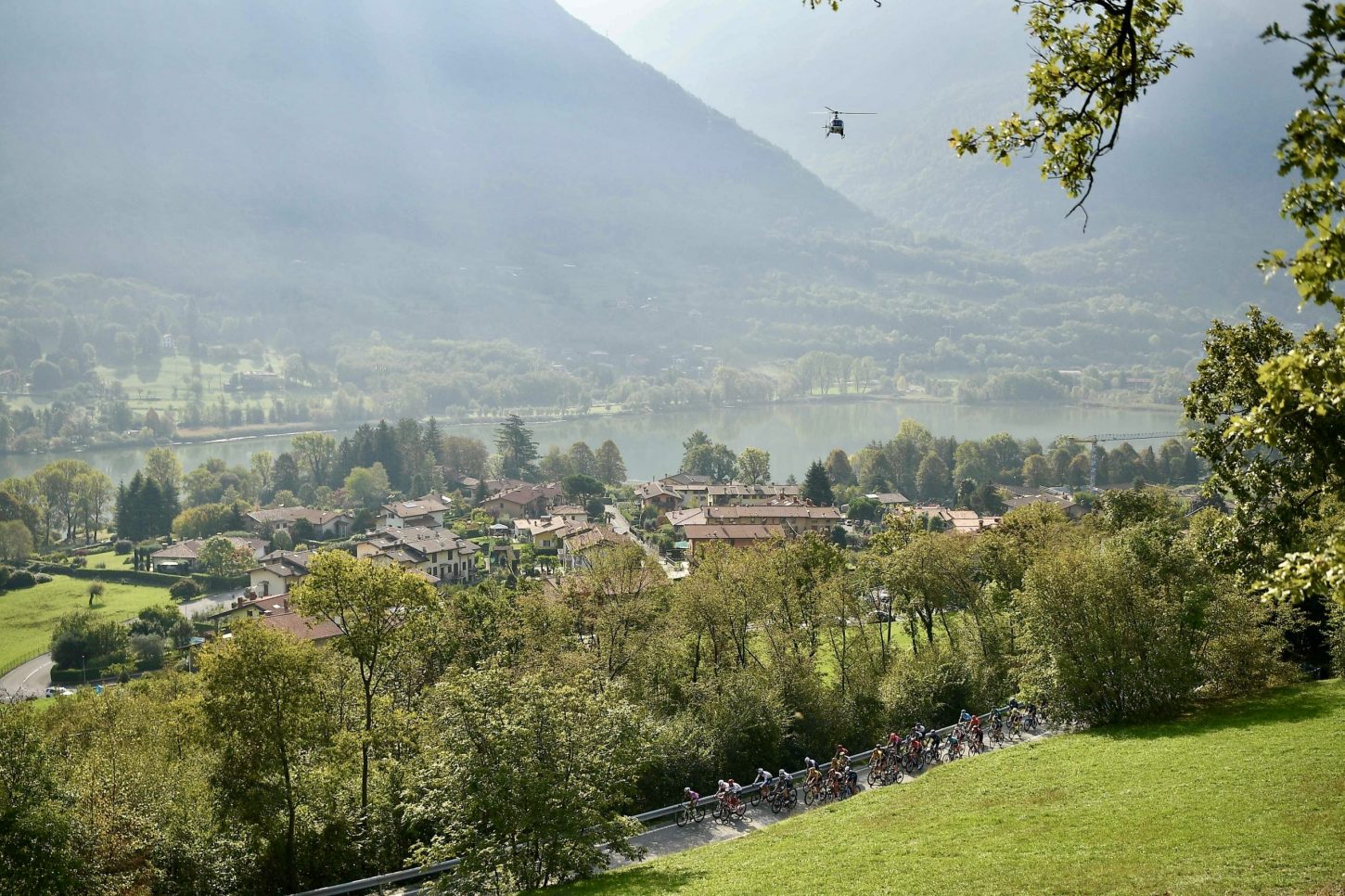 The pair rode away from the rest of the field on the Civilio climb, later exchanging several attacks before their final sprint battle.

In the meantime,  Mikel Landa (Bahrain-Victorious) managed to bridge his way to the lead duo on a couple of occasions. But, the Spanish rider was dropped on the final ascent of San Fermo della Battaglia, but did hang on to complete the podium.

A trio was never going to get very far into the day and they welcomed more firepower when it arrived. Though the chasers were made up mostly of Italians – Alessandro De Marchi (Israel Premier Tech) the biggest name of them – the group also contained American Lawson Craddock (Bike Exchange Jayco), Frenchman Kenny Ellissonde (Trek-Segafredo) and Natnael Tesfatsion (Drone Hopper – Androni Giaccatoli) from Eritrea.

The course was a roughly reverse route of last year. Of the 4600m of climbing it contained, the direction of travel meant most of it was loaded into the first half of the race. That presented the eventual breakaway an early advantage that it was ultimately unable (or unwilling) to make the most of. Their lead was less of their own making than at the pleasure of the peloton, growing quickly to three minutes before capping out abruptly.

Passo di Gandia – 10km long, 7.5% average gradient – which came 40km into the race, presented an opportunity to grow the gap a bit but only by a couple of minutes rather than the five or more they would need to have any hope of taking the race to the line.

Though the peloton did not chase in earnest from that point, between them Jumbo Visma, Movistar and UAE Team Emirates seemed to agree to do as much of the work early on, rather than leave it until later. After 100km of racing the gap between the groups was less than three minutes.

The 50km before the start of the Madonna del Ghisallo was the flattest of the entire day. With the catch all but assured, it afforded a chance to restock and relieve.

Arriving on the roads that skirt Lake Como, the peloton made the collective decision that the breakers had enjoyed enough of the day in the golden autumn sun. Within 15km the gap had come down by almost 90 seconds. Much less being swallowed up on the Ghisallo, it seemed sure the break would be finished before they even reached the iconic climb.

One last effort did for them. With the escapees caught, the final phase could begin.

On the Madonna del Ghisallo, Nibali and Valverde were still keeping each other company within the rapidly dwindling front group. Jumbo Visma, led by Koen Bouwman, Chris Harper and Sam Oomen, stretched things out with a painful pace. Less than Vingegaard himself, the major beneficiaries of their effort were UAE Emirates, who had five riders, plus Pogacar, waiting in the wings.

Towards the top, and as they passed the Ghisallo, Harper handed over to UAE Emirates who immediately lit up the race with an injection of pace. That served to isolate Vingegaard further, and several names, including Julian Alaphilippe (QuickStep Alpha Vinyl) were distanced but able to rejoin the peloton on the descent.

The finishing circuit, comprising two ascents of the San Fermo Della Battaglia, separated by one of the longer, steeper Civiglia, saw the formidable foursome of Rafa Majka, Davide Formolo, Marc Hirschi and Joao Almeida came to the fore in service to Pogačar.

Pogačar’s attack could not be far off and the reigning champion chose Civiglio as the moment to break the race apart. He launched with 19km of the race remaining as Enric Mas was the only rider who had the legs to go with him. Though Mikel Landa could not match the initial acceleration, as they eased off he was able to turn a duo into a trio.

Barely a thousand meters later Mas tried a move of his own, which proved enough to drop Landa – at least until the descent – but barely stretched the Slovenian.

Having rejoined them Landa seemed determined to prevent the chasers from catching up, and secure at least a podium spot. The Basque rider put in the most effort on the descent and on the early metres of San Fermo Della Battaglia, but paid for it when Mas inevitably attacked again.

This time Landa would not be coming back, as Mas began to ride to guarantee himself second place.

Pogačar, with a record of fast finishes, was always the favorite in the finale. He was confident enough to lead from the front, maintaining a high pace from the flamme rouge, instructed Mas to start his sprint first, from the back.

Which was what he did, going quite long and very wide to prevent Pogačar from stealing a fraction of his wheel.

It was certainly a tactic and from the fixed front camera view, it momentarily appeared as if Mas might have it. An overhead replay showed it was not quite as close as it might have appeared. Pogacar won at a canter, and was able to celebrate well before the line.

Landa didn’t have the legs to get closer than ten seconds away, but a creditable first Monument podium was well-earned.

Alejandro Valverde, in his last dance as a professional cyclist, was the fastest finisher of the group he was with, to finish 6th and end his career with another top ten. Vincenzo Nibali (Astana Qazaqstan Team) – finished in 24th.