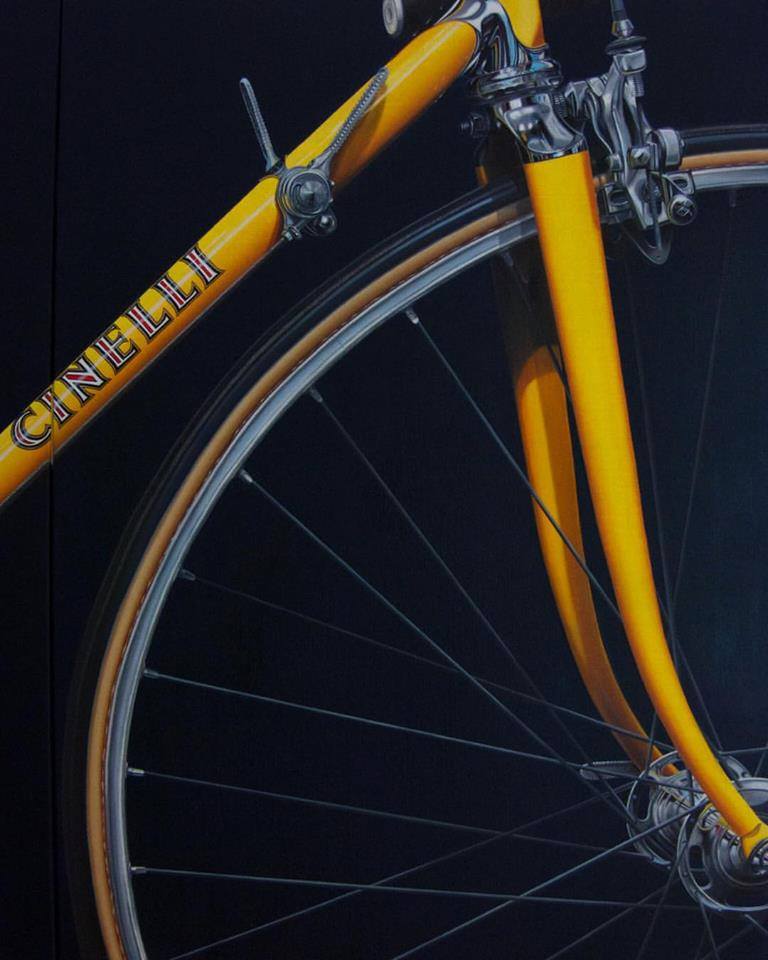 It all started in February of 1976 when Bob LeMond, Greg’s father, purchased the beautiful, yellow 1974 Cinelli. Interestingly, the bike came into the hands of Greg by way of Mike Synyard, CEO and founder of Specialized Bicycles (at the time he was the distributor for Cinelli in Northern California) and the owner of Rick’s Bike Shop in Reno, Rick Bullis. From there, Greg raced on it for the 1976-1977 seasons and won 40 amateur races. This was the start to a career in professional cycling that would span nearly two decades and included two World Championship titles, three monumental Tour de France victories (the first American to do so), and helped revolutionize cycling as we know it today. It’s only fitting that his first racing bike was yellow…

How The Painting Came To Be.

Greg approached me in early Fall of 2014 about doing something “really special” for a bike painting. We weren’t quite sure what that something “special” would be on that first phone call, but Greg knew it would probably end up being about the Cinelli, his Cinelli. I had heard of this almost… mythical, bike from years past. Greg would always say something like, “Oh the Cinelli, it’s just the most beautiful bike. It’s absolutely the most gorgeous bike you’ll ever see.” I had never seen it, I only knew it was yellow and from the 70’s, that’s it. So when we agreed on the idea to paint the Cinelli, I knew I would have to really do something “special.” When the Cinelli arrived at my house for me to photograph, I was pretty excited to say the least. When I pulled it out of the box and stood it against a bleak, white wall, it really was the most gorgeous bike I have ever seen. And it’s strange, I’ve seen hundreds of rare, beautiful, vintage bikes in person, but for some reason this one really is something special. I don’t what it is, maybe it’s that it is Greg LeMond’s first race bike or maybe it’s that radiant yellow? Whatever it is, it’s beautiful and demanding of attention. At that point, I knew it was going to be hard to capture it’s beauty and that mythical quality I had always felt about it. A small painting of it would not do, nor just a segment or a part of it. No, it really did need a large view of it and to be large in scale. That’s when I came to the idea to do a large triptych. Each panel would allow me create an image or section of the bike that could stand on its own, three paintings in one. And, most importantly, each panel would represent one of Greg’s three Tour de France victories.

So, after nine months of steady, tedious work, the Cinelli has come to be once more.”

“Jaune,” meaning yellow in French. It is not only a fitting title due to it’s correlation to the color of the Cinelli and to the Tour de France, but the word itself is beautiful in appearance and in sound. It is simple, yet full of depth, just as the Cinelli was and is to this day.