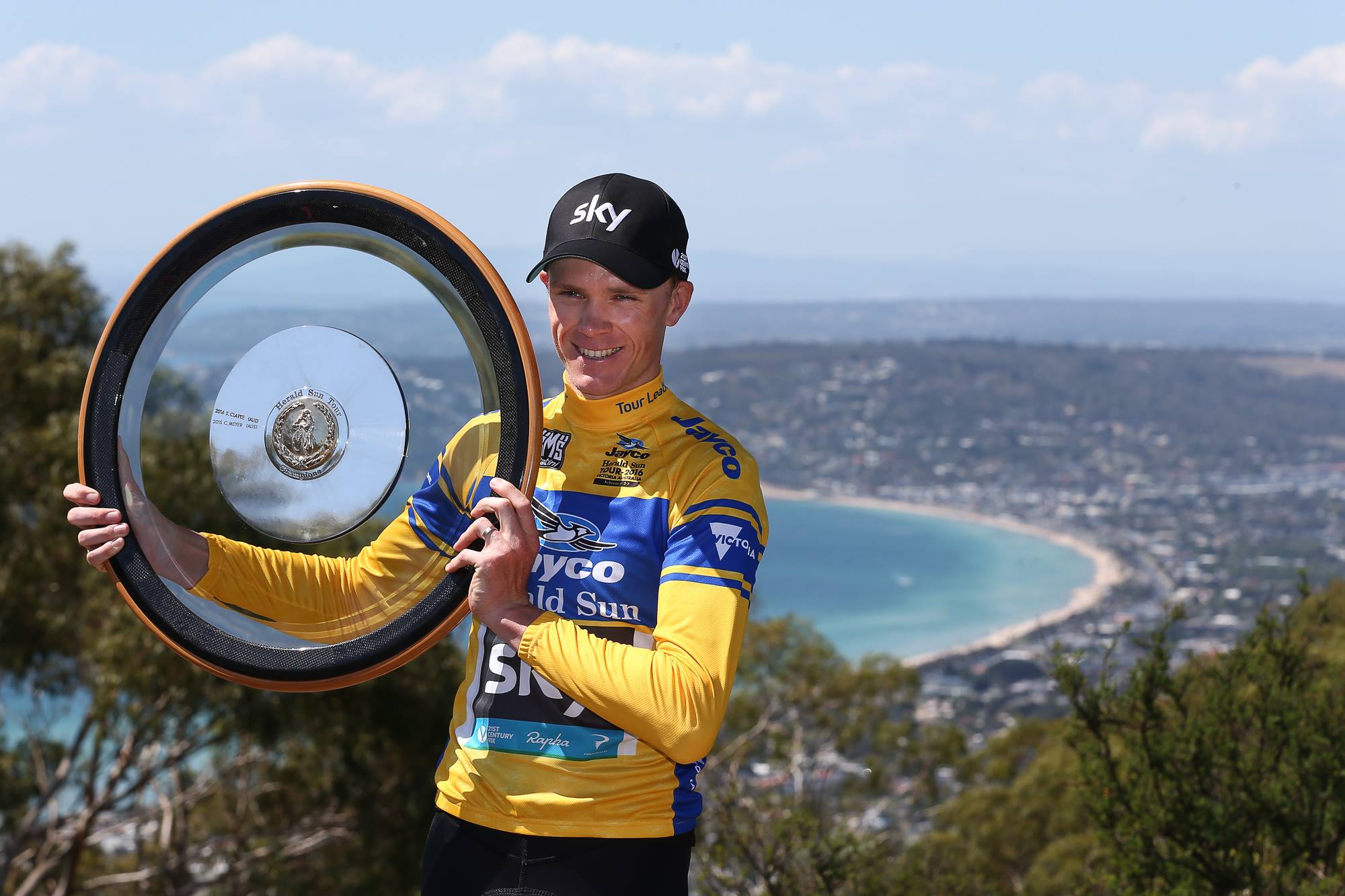 Froome was pushed over the three ascents of Arthurs Seat by several challengers, in a move that ultimately forced the race lead to change hands from teammate Peter Kennaugh who had led the race from stage 1.

The Kenyan-born Brit finished the stage 17 seconds ahead of Damian Howson (ORICA-GreenEDGE), with a further four seconds back to US-based Victorian Jonathan Clarke (UnitedHealthcare).

In finishing in seventh place on the day, Kennaugh secured runner-up position on the General Classification, 29 seconds behind Froome with Howson netting third place, 1:01 off the lead.

In becoming the 63rd winner of the event, Froome created history, as no current champion of the French grand tour has ever won the oldest stage race in Australia.

Froome thanked Kennaugh admitting that the result was something that “unfolded out on the road” and was not pre-planned.

“We couldn’t have asked for a better week as a team with Pete kicking things off earlier on going into the leader’s jersey, first and second on that stage and then obviously winning today – the final stage up Arthurs Seat,” Froome said.

“It’s a really nice way to end off the week. Also to be first and second on the General Classification, you really couldn’t ask for much more.”

Froome will be hoping it’s just the start of things to come as he chases a third Tour de France title, as well as a gold medal at the Rio Olympic Games.

“There’s a lot to race for this year,” he admitted. “Coming here and walking away with the overall victory is an amazing way to start off the season.”

Froome’s stage win never looked in doubt over the final three ascents of the Arthurs Seat climb, but the 30-year-old admitted it was more taxing than it appeared.

“It’s never easy. Even a day like today it’s never easy to win a bike race, even if you’re against people you don’t really know,” he said. “You’ve got to turn yourself inside out for the result. As much as an eight-minute climb can hurt, it did.”

Kennaugh explained it was a hectic day on the road.

“It was really quick,” he said. “120km of flat-out racing all the way. It was hot. I’m a bit gutted not to win but Froomey won and he was the strongest throughout the race so he deserves the win.

“I’m really happy with my stage win at the start and the way I’ve started the season so, I think happy days for Froomey today and happy days for the team all round.”

Kennaugh admitted the result had been soured by a, “unfortunate” verbal altercation between himself and Avanti IsoWhey Sports’ Pat Shaw out on the road. The spat between two the riders continuing immediately after the stage finish.

“That’s sport I guess. It happens but there’s no need for it in the pelo,” he said.

Shaw wouldn’t comment, leaving his sports director Andrew Christie-Johnson to speak on his behalf. He confirmed that the war-of-words had been a running battle beginning at the Cadel Evans Great Ocean Road Race.

“There’s nothing to it other than it’s a blue that you’d have in a school yard and that’s the way it is,” Christie-Johnson explained. “There was nothing more than what Kennaugh had said to two or three of our riders over the other days. Froomey acknowledged that they’ve got someone who’s a bit of a hothead and at the same time, so do we.”

Howson, who improved on his fifth overall placing in 2015, was also pleased for the result.

“I’m obviously really happy to finish off the week on the podium overall, it was a target for myself and the team so, to fulfill that I’m privileged,” the South Australian said.

Several earlier attempts were shut down by Team Sky, while State of Matter / MAAP were also attentive at the front.

The peloton would only allow a maximum of advantage of 2:21 and with 40km of racing down, close to a minute had been taken back approaching the first intermediate sprint of the day.

Hill added to his overnight tally in the points classification, first to the opening intermediate sprint at Red Hill, ahead of Shaw and Beppu. That was enough for the Canberra-based rider to secure the green jersey (30 points) ahead of Froome and Kennaugh.

With the gap hovering around the minute mark, Beppu attacked from his breakaway companions, taking maximum points at the intermediate sprint at Balnarring, ahead of Shaw and Hill. Not enjoying his time out front solo, Beppu went back to the break but a change was in the air.

Ewan and Shaw both sat up, and Drapac’s Travis Meyer and ORICA-GreenEDGE’s Christian Meier raced ahead of the peloton, forming a new breakaway group with Hill, and Beppu and at the 76km mark, the gap still hovering at just under a minute. The fast-approaching first ascent of Arthurs Seat would doom the breakaway’s fortunes and on the opening hairpins, the group of four was swallowed up as Sky led the charge.

Ian Boswell opened proceedings with Froome and then Kennaugh tucked at the back of the Sky pack, with Jack Bobridge (Trek – Segafredo) on the British Road Champion’s wheel. Sky climbed the first ascent of Arthurs Seat at a steady pace and with 200 meters to the start-finish line, Froome made his move with King of the Mountains leader Chris Harper (State of Matter / MAAP) in hot pursuit. Froome took the points ahead of the young Australian, in the process, regaining the virtual lead for the polka dot jersey.

With 16km left to race, Team Sky maintained control at the front of the fast shrinking peloton with Boswell again setting the tempo ahead of teammate Sebastian Henao, Kennaugh and Froome as they negotiated the switchbacks. Froome raced ahead of the bunch nearing the top of the climb, this time with Joe Cooper (Avanti IsoWhey Sports) hot on his heels.

“When I went for the King of the Mountain points the second time up Arthurs Seat the team behind said, ‘listen Chris, just sit on the wheel, we’re not going to ride behind, you’re in a great position to go for the stage win and the overall victory’,” Froome explained after the stage of the moment his Sun Tour fate was sealed.

Froome and Cooper opened up a 35 second gap on the remnants of the peloton with One Pro Cycling and Trek Segafredo at the head of the chase. Nearing the start of the final ascent, that gap hovered around the 40 seconds.

Three kilometers remained and Froome chose that moment to accelerate ahead of Cooper with an astute tempo change with the peloton just 16 seconds behind. Howson made his move, with Clarke giving chase with only the minor placings to be decided. Froome crossing the finish line as the stage and Sun Tour winner with 300 metres to spare.