CapoVelo.com
CapoVelo.com - - Johan Bruyneel Lashes Out at Greg LeMond for His Obsession with Lance Armstrong and Mechanical Doping
41907
post-template-default,single,single-post,postid-41907,single-format-standard,no_animation 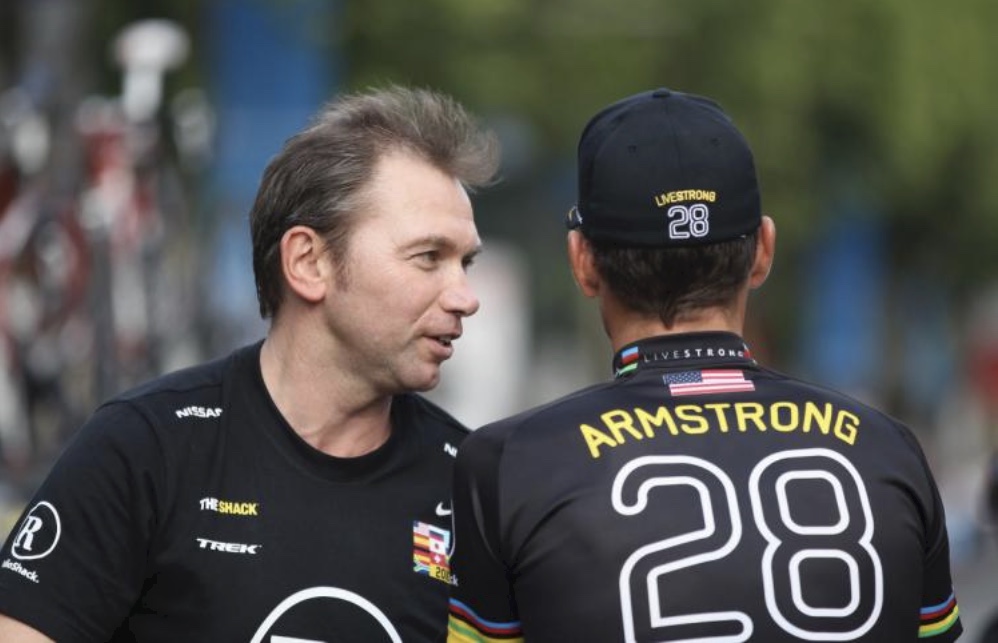 In a recent interview with the Belgian magazine, HUMO, Johan Bruyneel lashed out at Greg LeMond, calling him an “asshole” and accusing him of continuing to heap undue calumny upon disgraced cyclist Lance Armstrong, along with his obsession that mechanical doping may be widespread within the pro peloton.

As many recall, Bruyneel was directeur sportif of the infamous US Postal Team during the period that saw Armstrong win his seven consecutive Tour de France titles.

LeMond recently caught the ire of Bruyneel by suggesting that Armstrong and the US Postal Service team may have engaged in mechanical doping back in the day – one of the biggest scandals to plague the sport since performance-enhancing drugs.

Bruyneel likened LeMond and the rest of Armstrong’s detractors to a “sect”, asserting that “they can keep trying until the year 3000 – they’re not going to find mechanical doping.”

LeMond and his wife have been openly critical of Armstrong over the years, especially after he admitted to using performance-enhancing drugs throughout his career.

The two were recently featured in a 60 Minutes program that investigated claims that bikes with hidden motors had been used in major races like the Tour de France, and even going so far as to say they’ve been secretly working with French police since 2014 to help uncover the illicit practice.

The spotlight turned on Armstrong when the producers of the program purchased an old US Postal team bike from 1999 and fitted it with a motor, which was then tested by former team rider – Tyler Hamilton.

During the program, the engineer behind mechanical doping, Istvan Varjas, asserted that the technology has existed since 1998, and as part of an exclusive deal, he was paid $2 million not to talk about or further develop his technology for a period of 10 years.

“I don’t know what it is that’s up with LeMond. It’s not normal to be so obsessed with Armstrong,” said Bruyneel, who is currently serving a 10-year ban for his involvement in doping.

“He has realized that people are less and less outraged by Lance, because it has become clear that he was only one of many who were doping, and that’s why LeMond is now looking for something new with which to tarnish his name. But he’s not going to manage it. They can keep trying until the year 3000 – they’re not going to find mechanical doping.”

“It seems strange that LeMond travelled to the Tour de France with his wife to investigate mechanical doping with the French police – like he was on some sort of mission. They have prepared all of this. They’ve tried to manipulate everything to spread suspicion about Lance once again.”

At the Tour de France last year, LeMond was asked by French newspaper L’Equipe if he was ‘obsessed’ with Amrstrong and responded: “If I have this fascination on Armstrong, it was because he was abusing people, he threatened them, and I like neither cynicism nor the abuse of power.”

During his interview with HUMO, Bruyneel acknowledged that it was possible that mechanical doping may have been used by a small percentage of riders during recent years, but was heavily critical of the program and scoffed at the suggestion that it is a widespread problem in the pro peloton.

“The arguments put forward were plainly ridiculous – Vargas said absolutely nothing, he was only after publicity”, he said, suggesting that fitting an older bike with a modern-day hidden motor doesn’t amount to anything.

“It’s not something you can hide. As a team you cannot organise something like that – you have to involve many people and it would be impossible to keep it a secret.”

Bruyneel went on to attack LeMond’s character more generally, casting aspersions on his insistence that he never doped in his career, which included three Tour de France victories between 1986 and 1990.

“LeMond knows that nothing that might affect him will ever come to light. Anything he might have done wouldn’t be provable today,” he said. “He always says that he won clean while his whole generation is suspected to have been doping. It seems impossible to me. He loves hearing that he’s the only American to have won the Tour. Or, better still, that he is the only winner of the Tour de France.”

LeMond has always insisted he raced clean, and since retiring he has been openly skeptical of others and joined anti-doping efforts such as Change Cycling Now.

“In his era LeMond did all he could to come across well, with that baby face, always smiling, the spoken French with a pronounced American accent. But in the world of cycling everyone knows he isn’t a very nice man,” continued Bruyneel.

“I often compare him with Laurent Fignon. To the outside world he seemed like a bad-tempered teacher who you couldn’t approach, but in the peloton we remember him as a lovely person. LeMond was the polar opposite – an asshole. He ended up on bad terms with everyone.”