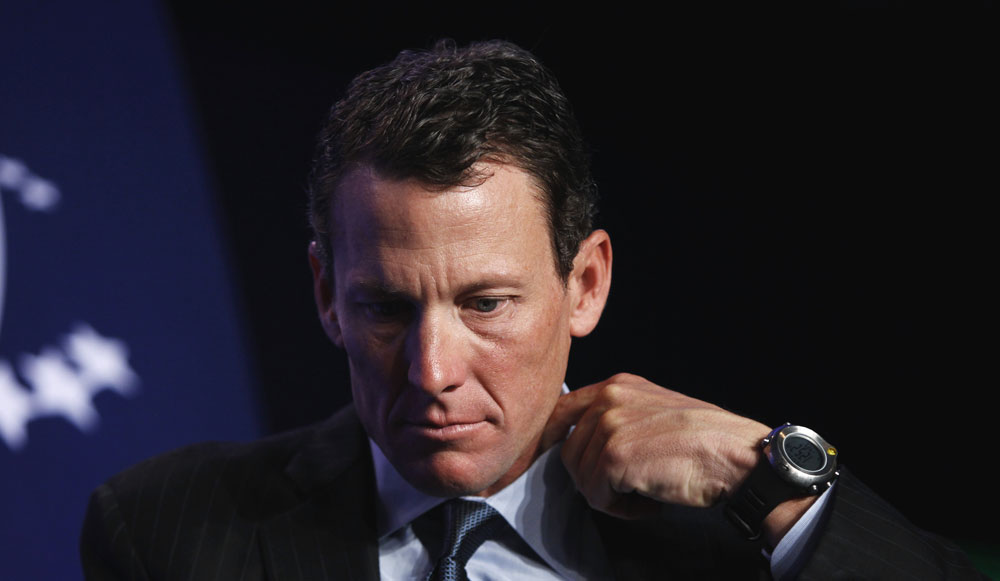 A judge dismissed part of the federal government’s civil fraud lawsuit against Lance Armstrong today, giving the disgraced cyclist a small but potentially significant victory in a case that still could cost him $100 million.

Today’s ruling, threw out the government’s argument that Armstrong’s cycling team had an obligation to pay back sponsorship money it received from the U.S. Postal Service.

Under the law of “reverse” false claims, the government had argued that the team was required to return this money because it breached its sponsorship contract by using banned drugs and blood transfusions to enhance its performance.

However, U.S. District Judge Christopher Cooper disagreed, ruling that the notion of reverse false claims should be more narrowly applied and didn’t fit this case. He dismissed it Monday in summary judgment.

“The government … contends – again – that long-established principles of contract and restitution law obligated (the cycling team owner) to repay any funds attributable to a breach of the Sponsorship Agreement,” Cooper wrote. “The Court rejected this view after considerable briefing.”

As a result, the government might have a harder time proving it was defrauded and suffered damages from Armstrong’s banned doping practices as a member of the USPS cycling team. Several other parts of the government’s case against Armstrong are still in play, including its allegation that the cycling team made direct false claims for payment to the USPS.

“The government will have a tougher hill to climb,” said Tony Anikeeff, an attorney and False Claims Act expert who is not involved with the Armstrong case.

The government sued Armstrong and the cycling team’s owner, Tailwind Sports, on behalf of the USPS, which paid more than $30 million to sponsor Armstrong’s cycling team from 1998-2004. The government argued the team breached its contracts by doping and caused false claims to submitted for payment while in violation of those contracts. Under the False Claims Act, damages could be tripled to nearly $100 million.

Armstrong’s attorneys argued, that the government’s lawsuit is baselessly, because the USPS was not damaged by the doping and instead received far more in value from the sponsorship than it paid the cycling team. This value included the positive publicity and brand exposure that came with Armstrong wearing USPS gear while attracting worldwide attention as a cancer survivor who battled back to win the Tour de France.

“USPS-commissioned studies conservatively valued the global exposure the USPS received from 2001 to 2004 at $138-147 million – more than four times the amount the government paid to sponsor the USPS team,” Armstrong’s attorneys noted last year.

However, if its the US government’s reverse false claims argument was allowed to stay in the case, it could potentially have shown that the cycling team breached its contract by doping and concealed the breach by lying about it for years. Therefore the team should not have been paid what it received and has an obligation to pay it back, according to this argument. Likewise, the government argued that Armstrong was liable because he made false statements to conceal such an obligation.

For the government, “it would be much easier to force Armstrong to have to justify why he should not have to pay back everything as an `obligation’ based upon his breach,” said Anikeeff of the firm Williams Mullen.

The government no longer has this luxury after Cooper’s decision, Anikeeff said. Instead, the government faces the more complicated prospect of having to prove it was defrauded and suffered damages that exceeded what it received from the sponsorship.

Armstrong, 44, denied doping for more than a decade before finally admitting it in a televised interview with Oprah Winfrey in January 2013. The government filed suit against him later that year, joining a case originally filed in 2010 by Armstrong’s former teammate, Floyd Landis, who stands to get a cut of the damages as a government whistleblower.

Cooper’s ruling effectively overrules a 2014 determination on the issue by his predecessor, Robert Wilkins, who left the case after joining the U.S. Court of Appeals and recently has been mentioned as a possible nominee for the U.S. Supreme Court to replace the late Antonin Scalia. Back then, Judge Wilkins’ statements on reverse false claims seemed ominous for Armstrong.

“The alleged rider doping would have been a total breach of the 1995 (USPS sponsorship) agreement, and the same clearly holds true for the 2000 Agreement,” Wilkins wrote in a ruling issued in June 2014. “As such, the Postal Service clearly could have sought restitution – repayment of the sponsorship fees – as a remedy.”

Wilkins added that the government has “sufficiently pled that the defendants owed an obligation to pay money to the government due to the alleged breach of the sponsorship agreements as a result of the riders’ doping,”

Cooper, who replace Judge Wilkins on the case, rejected this analysis, saying the government was overreaching on reverse false claims and instead should stick to what the sponsorship contract did or didn’t provide.

“The Sponsorship Agreement imposed no obligation on Tailwind to tender money or property to the Government in the event of a breach,” Cooper wrote.

Cooper issued the latter opinion Jan. 12, when he dismissed the reverse false claims portion of Landis’ case against Armstrong’s former business agents, Bill Stapleton and Barton Knaggs. At the time, Cooper also ordered the government to show why he should not dismiss the reverse false claims portion of its case against Armstrong. The government then try to persuade him not to in a 33-page response on Feb. 2, but Cooper rejected it in his ruling Monday.

“While these arguments were forceful and well-reasoned, the Court was not persuaded by them,” Cooper wrote.

The case has been locked in disputes over pretrial discovery evidence for much of the last year, and it remains the biggest legal hurdle for Armstrong.

The defrocked Tour de France champion previously said he didn’t have $100 million to pay if the government won the case and also has reached undisclosed settlements to resolve other fraud lawsuits against him, including two from insurance companies that funded his bonuses for winning the Tour de France.