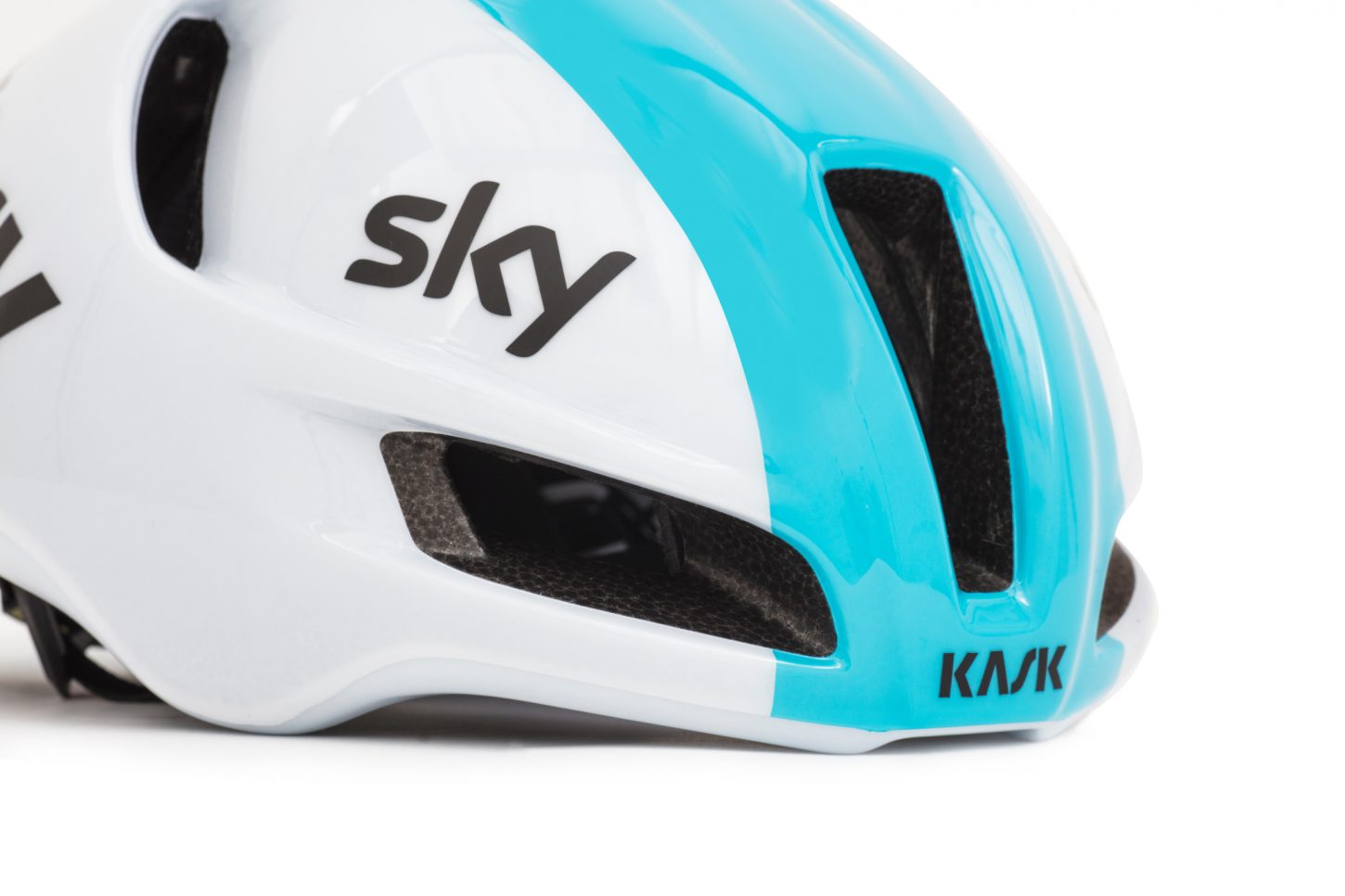 The cycling masses got their first glimpse of KASK’s new Utopia aero helmet during the opening event of this year’s Tour Down Under yesterday, which was officially unveiled under the auspices of Team Sky.

KASK is already out in front of its new aero lid, calling the Utopia “the fastest road helmet ever created“.

According to KASK, they vetted ten of the competition’s most aerodynamic helmets using wind tunnel testing, along with 3D scanning and computational fluid dynamics (CFD) simulation, in order to establish a baseline for developing the Utopia.

The structure of the Utopia comprises 5mm’s of internal padding that’s made from a material called Resistex, which has earned itself the reputation for being excellent when it comes to wicking way perspiration and drying quickly.  In addition, KASK has incorporated a special yarn into the padding as well, which contains a continuous filament of conductive material similar to active carbon that’s both bacteriostatic and antistatic, and is designed to better regulate heat.

In the end, KASK claims the advanced aerodynamic properties of Utopia has resulted in a savings of up to 6 watts while riding at a speed of approximately 30 MPH (50KM/H).

Team Sky’s Head of Technical Operations, Carsten Jeppesen, says, “when it comes to aerodynamics there is little that is more important than the helmet, but it’s not just about aerodynamics – the safety of our riders is our first priority, and KASK shares this philosophy. Working with Kask on the development of the Utopia has enabled us to produce a fully tested, well-rounded helmet.”

The claimed weight for the Utopia is an impressive 235g (size medium), with pricing and availability to be announced.

To develop the Utopia, KASK tested 10 of the best road aero helmets on the market in the wind tunnel, and created a 3D scan for a computational fluid dynamics (CFD) simulation. The helmets were tested at various speeds and yaw angles to reflect cross winds. At the end of the test, the drag data of Utopia versus the best competitor helmet resulted in a saving of up to 6 watts when riding at 50kph.

Aerodynamics is at the forefront of Utopia’s design with ventilation also a key factor considered during its development. Suitable for riding road racing and triathlon, Utopia can be used year-round in all climates, due to its refined design to keep the rider cool, especially when riding at high speed.

The Utopia uses a breathable and quick-dry padding, offering a 5mm layer of fast-wicking material called Resistex that takes moisture away from the rider’s head and moves it to the helmet’s outer shell, contributing to a helmet that’s comfortable to wear all day.

Utopia will be available later in the year.

Utopia will be available in three sizes: