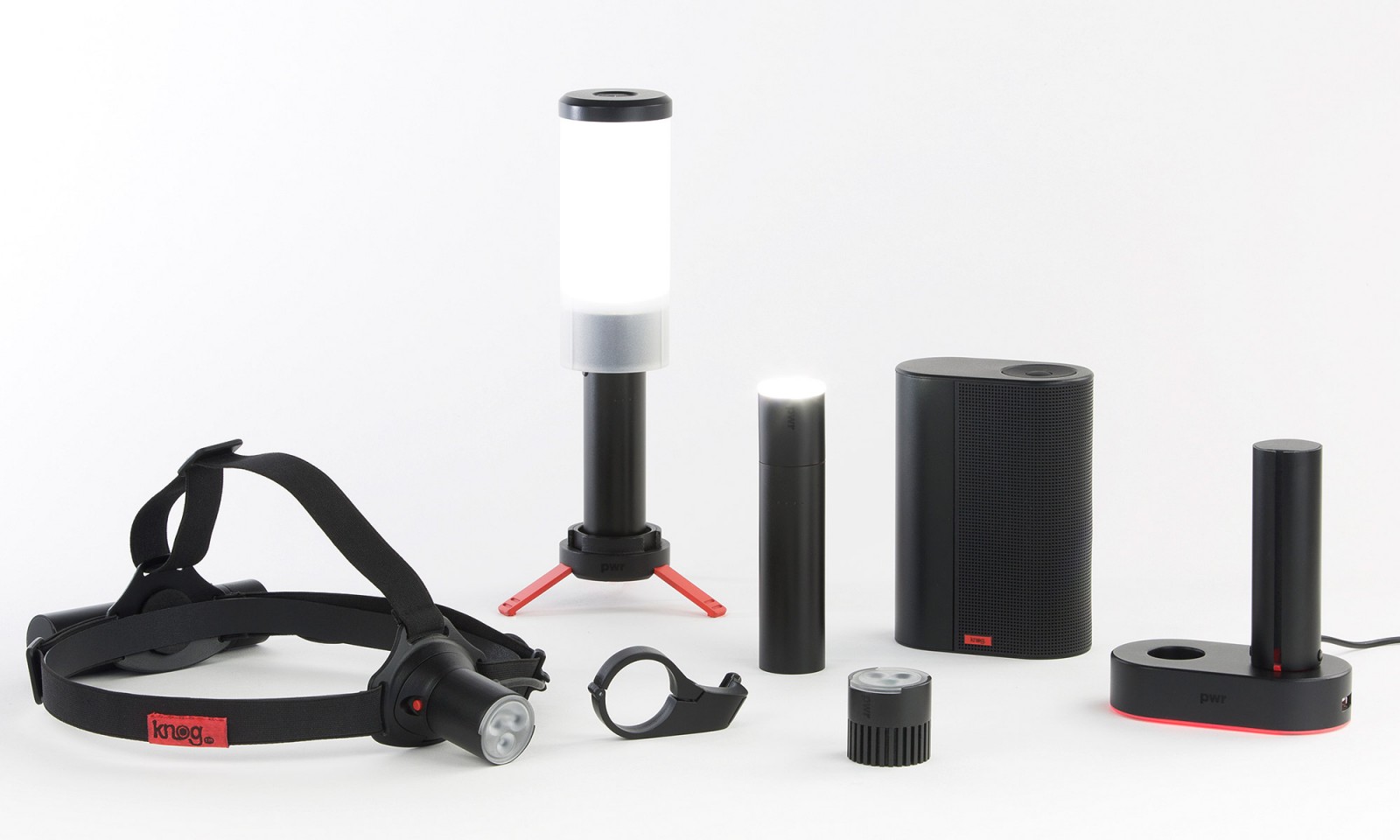 The innovation bike brand, Knog, is at it again, this time with Kickstarter campaign to launch its new PWR system which consists of a range of lighting products that can be all powered by one battery.

So what actually is PWR?

“You can remove it, use it to charge other products outside the range, recharge it, and use more than one for continuous power. Its 3200 mAh’s of power can fully charge your iPhone and with a light head, can still light your bike ride home before you put a few hours of tunes on at home.”

According to company founder, Hugo Davidson, the development phase for the PWR started around four years ago, when Knog was looking into extended run times for their bicycle lights, but at the time the technology just wasn’t up to scratch and the idea was placed on the back-burner. But then last year they began to take it seriously again, using electric power tools with replaceable batteries as a jumping off point before coming up with the concept of a modular battery and a series of products to go with it.

“When we started unpacking that idea we realized it was far bigger than what we’d initially considered. Obviously we’re known for our bicycle lights but we could really start to look at a whole range of other products that could make the whole thing far more compelling. We’ve always wanted to do outdoor products … this idea of actually going into things that could be used when you’re biking or when you’re camping really interested us,” said Davidson.

To get the design process started the first thing the Knog team did was sit around with a “whole lot of post-it notes”, throwing around as many ideas as possible before doing some competitive market research in order to figure out what products would really benefit from sharing a universal battery — the criteria being any product that typically had a poor run time but was also expensive, leaving room for Knog to create something that would last longer and be cheaper due to its shared power source.

Wanting to keep a simple form for all the products, the aim was aesthetic elegance and appropriate material choices. “I was inspired by listening to a lecture given by one of the Apple designers who said that they spend hours and hours just exploring what the corner of a phone or the corner of a button should look like, because all phones end up looking the same and they need to consider what’s going to set the iPhone, or whatever it is, apart from its competitors.”

Knog find itself in a similar position to Apple in the sense that with so many bike lights on the market, they have to do something special to set themselves apart. With this in mind they’ve really concentrated on the details behind pwr to make sure that each product works as perfectly together as possible.

Of course the benefits stretch beyond that, rather than buying four different products with four separate batteries cyclists are able to save money, help the environment and even have a little extra room in your bag now that it won’t be full of cables. There’s also a free web app that will allow you to program new modes, or reduce them, for your lights, and each product is waterproof — which is a pretty important aspect for the outdoors.

A $50 pledge will get you the base 300lm road & commuter light with one PWR bank and offset mount. Stepping up to the 800lm head for trail riding will require a $74 buy-in, but adds in not just more power, but an elliptical beam pattern tuned for trail riding

You can learn more about Knog’s PWR system by visiting their Kickstarter campaign here.