What is Lactate Threshold and How is VO2 Max Measured? 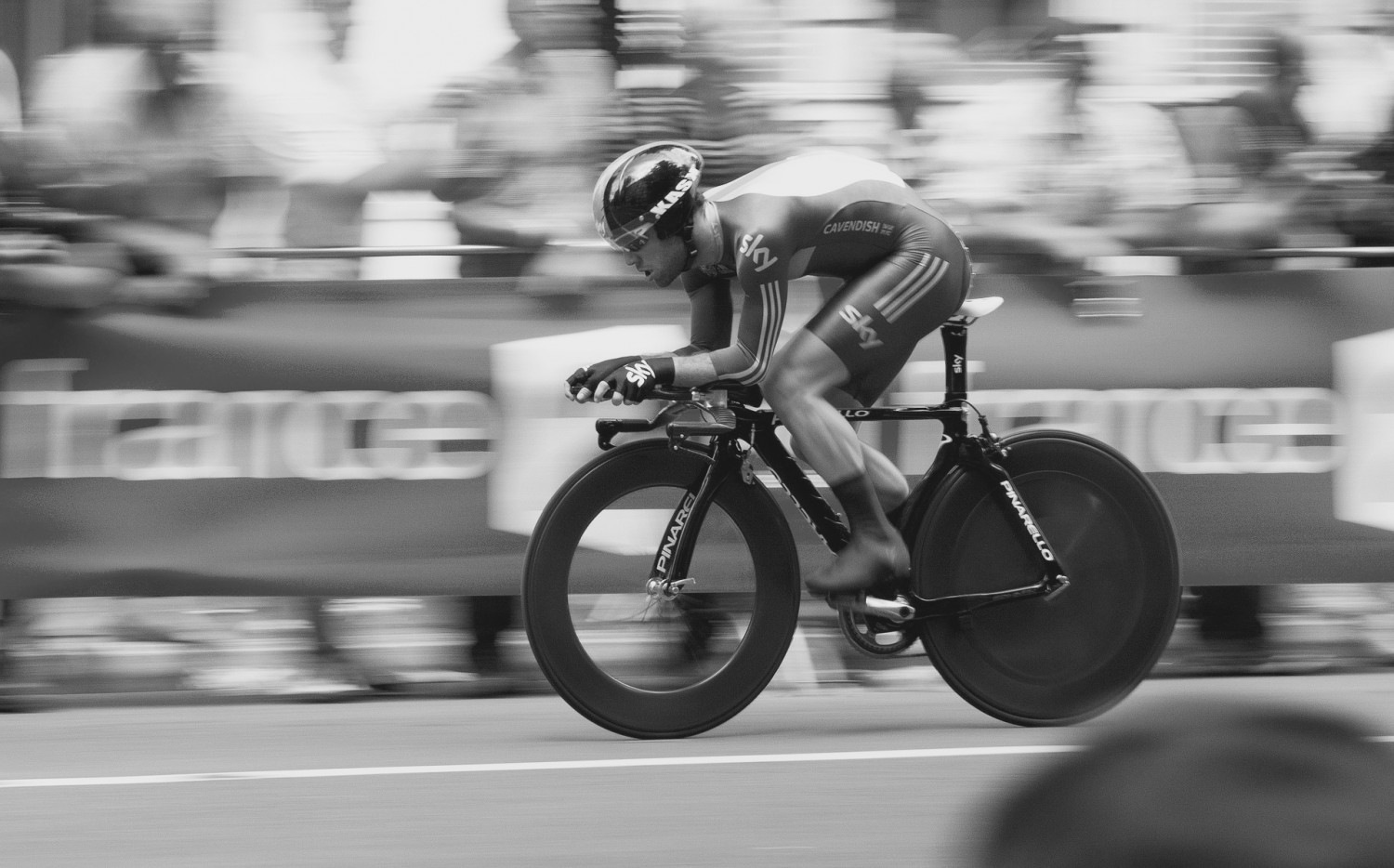 Many cyclists have done some form of interval training. Interval training works by taking advantage of lactate threshold and your body’s ability to produce quickly fuel for its muscles when there isn’t enough oxygen.

Usually, you function just fine fuelling yourself largely with oxygen, such as walking to the corner store, but it takes awhile to turn all that oxygen you breathe into energy. Sometimes you need more energy than the oxygen you inhale can offer, like sprinting for the bus. Lactate threshold comes into play during these harder efforts.

Understanding lactate threshold requires understanding lactic acid and the difference between aerobic and anaerobic exercise. Aerobic exercise is fuelled mostly through the delivery of oxygen to your muscles, but when you can’t move oxygen to your muscles quickly enough, your body begins to break glucose down into pyruvate through a process called glycolysis. Glycolysis is always happening and usually your body doesn’t really need the pyruvate produced, so it’s used to assist the aerobic system. But when you need more energy quickly, glycolysis cranks up pyruvate production and it is broken down further into lactate, or lactic acid, which allows glucose breakdown to continue.

Your blood always has some lactate in it, but your lactate threshold is the point at which your body produces lactic acid more quickly than it can get rid of it, causing it to build up in your blood. This happens quickly and can go on until your blood accumulates too much lactic acid in it to keep working. The process produces feelings that vary from uncomfortable to nearly unbearable. Lactate is responsible for the burning sensation in your muscles after a workout or a town-line sprint.

This burning sensation is also when your muscles become too acidic to break down any more glucose. Lactic acid, as a byproduct of anaerobic metabolism, eventually forces itself to stop. It seems backwards, but it works as a safety mechanism preventing muscles from injuring themselves through overexertion.

This entire system is also the reason cheetahs can sprint so quickly, but need long periods of time between failed hunts. They are incredibly efficient at glycolysis, but are less efficient than humans at removing lactic acid from their blood afterwards.

Interval training uses lactate threshold by moving above and below it. A rider uses the body’s ability to get rid of lactic acid during rest periods to train and become better at managing the acid. Like VO2 max, over time you can raise your lactate threshold, increasing your ability to perform at high intensities for longer periods.

Lactate threshold is the point when you body produces lactic acid faster than it can get rid of it, eventually forcing you to stop whatever you’re doing if not managed. It’s an important function in anaerobic activity and partially what prevents a rider from ripping up a climb with an unworldly time. It’s also what almost all interval training in based around.

Riding fast is a matter of natural ability, training and desire. All three factors play an important role in keeping the big ring spinning. When discussing natural ability, many people throw around the term “VO2max,” which means maximum oxygen consumption.

Maximal oxygen consumption (VO2max) is the maximum amount of oxygen that can be used by the body for maximal sustained power output (exercise). Since the body uses oxygen to convert food into energy (ATP), the more oxygen you can consume, the more energy, power, or speed you can produce. VO2max defines an endurance athlete’s performance ceiling, or the size of his or her “engine.” Research has shown that VO2max significantly determines performance in endurance-based events such as cycling, triathlon, running, and Nordic skiing.

Remember, however, that VO2max is only one piece of the rider’s performance puzzle. Ability to perform in a race also depends on lactate threshold, appropriate peaking, nutrition and tactics (to name just a few).

Let’s return to the “engine” analogy. If we were to race two cars, one a dragster with a large engine and the second a stock car with a much smaller engine, which one would win? You can’t say. If we raced them a quarter mile down a drag strip, the dragster with a larger engine would win. However, if we raced them 400 miles, the stock car would win even with a smaller engine. Why? The dragster may be fast for short bursts, but it can’t maintain its speed for an extended period of time. The same is true with two cyclists. If Bill had a high VO2max but a moderate LT, and Tom had a moderate VO2max but a ridiculously high LT, Tom would likely find himself victorious in a head to head race up L’Alpe d’Huez. Although Bill has a higher VO2max, Tom can maintain a higher workload for a longer period of time.

How is VO2 Max measured?

Many endurance athletes already have some idea of what a VO2max test entails: an incremental increase in exercise effort until the participant is unable to continue increasing his or her workload. The athlete can perform the test using any number of exercises: running, cycling, rowing, and even swimming.

Because VO2max will vary between sports for various individuals, athletes will generally perform the test in his or her preferred sport. Regardless of the testing modality used, all the tests do the same thing. They take a happy-go-lucky individual and turn him or her into a grimacing, suffering, and most importantly, gasping test subject.

As exercise intensity increases, a machine calculates oxygen consumption (VO2) by collecting and analyzing the test subject’s inspired and expired air. With each incremental increase in power output by the athlete, more muscle mass is employed and more oxygen consumed. VO2 will thus increase linearly with exercise intensity until the body reaches its maximum ability to consume oxygen. At this point, oxygen consumption will level off, or plateau, when the subject reaches his or her VO2max.

Once the test analyzes the data, the athlete is given a numerical value of his or her VO2max. This number can be expressed in two forms. The first is called your absolute VO2max (liters O2/minute) and will likely fall between 3.0-6.0 l/min if you’re male, and 2.5-4.5 l/min if you’re female. The second is called your relative VO2max (milliliters O2/kilogram body weight/minute). For those who recall their science classes, the difference is in the units that follow the number. The relative VO2max takes into account the athlete’s body weight, whereas absolute VO2max does not. You can, therefore, impress you friends by quickly increasing your relative VO2max by merely losing some weight!

There are a few requirements to have a useful and representative VO2max test:The test must employ at least 50 percent of the test subject’s total muscle mass. Sports such as cycling, running, swimming and Nordic skiing all qualify. The test must be of sufficient duration to maximize cardiovascular responses. The length of suffering is usually 6-15 min. Finally, a highly motivated individual must perform the test. (The more pain and suffering during the test, the better the data).

How do you measure up?

The following are examples of absolute and relative VO2max values of untrained, moderately trained, and elite aerobic individuals.

There are three primary factors that can affect VO2max: altitude, age and gender.

Altitude: An increase in altitude results in a decrease in air density and the partial pressure (or amount) of oxygen in the air. Therefore, you can expect a 5-7 percent loss in VO2max from sea level to 5,000 feet.

Age: Peak physiological function occurs at about 30 years of age. VO2max decreases approximately 30 percent between the ages of 20 and 65, with the greatest decline after age 40. However, decreases in VO2max can be extremely variable and can – at least partially – be offset by training.

Gender: In general, females tend to have lower VO2max values than males (15 percent to 20 percent less). This is primarily due to differences in body composition, hemoglobin content in the blood, and heart size. Females, on average, have a higher percentage of body fat, lower content of hemoglobin in their blood, and have a smaller adaptation of heart size in response to endurance and resistance training. It is important to note that these differences are “in general” – there are always exceptions.

What does it all mean?

Well, it depends on who you are and how much your have already been training when you take your VO2max test. Research has determined that approximately 80 percent of an individual’s VO2max is genetically determined. Depending on your current training level, VO2max may be enhanced through progressive endurance training. Untrained individuals have the potential to increase their VO2max by 15-20 percent, but well-trained athletes are unlikely to realize an increase in VO2max of greater than 3-5 percent. So, if you’ve been training well for the past year and your VO2max is in the 50’s, don’t hold your breath to be the next Lance. The good news is that your lactate threshold is highly trainable, and elevating your LT will put the hurt on your friends or fellow racers. Since many elite athletes share comparable VO2max values, lactate threshold is often a better measure of fitness and endurance performance.