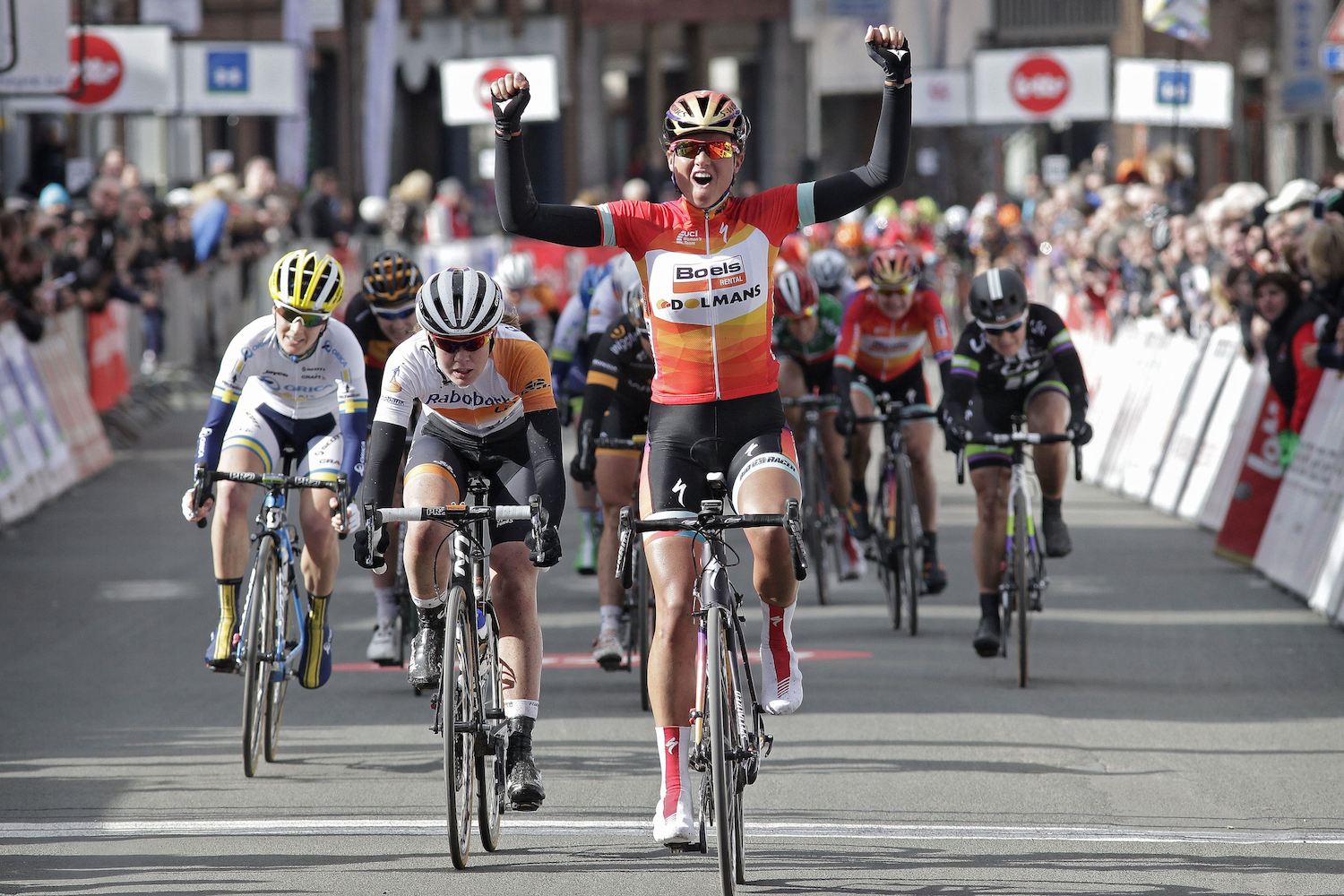 Dutch champion Nikki Terpstra opened his 2016 account in Belgium today, after wining Le Samym in a solo victory after an epic day in the saddle.

The Etixx-Quick Step rider broke away from an 18 rider lead group during the final lap of the finishing circuit in Dour, Wallonia, to claim his first victory of the season.

“It was a really tough race, as we rode full gas from the beginning,” Terpstra said. “The last 10 kilometers were the hardest of the entire race. I knew I had about 15 seconds on Thwaites and I had to continue pulling. To make things even more difficult, the last 3 kilometers had a headwind and an uphill part. The weather conditions made the race beautiful in a strange way. I am happy with this victory, as it gives me confidence and comes as a confirmation that my condition is good for the upcoming Classics.”

Despite a valiant effort on the part of Scott Thwaites, the British rider was unable to hunt down Terpstra during the final 18 kilometers, and had to settle for second pace.

An sizable breakaway group of 18 riders succeeded in riding clear of the peloton early on in today’s race.

However, foul weather conditions kept the breakaway group together until they reached the 35 kilometer mark, where Nils Pollitt (Katusha) made an attempt to ride clear.

Unfortunately for the Katusha rider, he never managed to open up a gap of anything more than a few seconds, before he was caught by Seneschal.

From there, the duo remained out front for only a brief while, before being reeled in by Terpstra and Thwaite.

Terpstra would later attack his rival during the final lap, leaving Thwaites unable to respond.

And, from there, the Dutch rider never looked back.

“I feel pretty strong at the moment, and Saturday [at Het Nieuwsblad] gave me a lot of confidence already but it’s not only me,” said Blaak. “It’s the team. The whole team works well together, and the whole situation in the team makes me better.”

When Boels-Dolmans forced a split in the crosswinds around 30 kilometers into today’s 112 kilometer race, a select group of 23 took shape.

“We had a five in that group,” said Blaak. “That the whole team. It was a good situation for us. We decided to continue working so at least the group stayed away. The girls were great.”

The front group gained more than a three minute advantage over the first chase group before reaching the last 17 kilometer lap, which featured several cobble sections and a final cobbled climb.

“The last lap, I tried to save my energy,” Blaak noted. “The girls were attacking and reacting on other attacks. We were in every move.”

“The two groups came together sometime around ten kilometers,” Blaak recalled. “The attacks kept coming. Emma attacked in the last four kilometer, and I followed her.”

“I thought it was a good situation,” Blaak said. “I had been saving myself all day. I only now had to beat her in the sprint.”

“I didn’t feel pressure today to win again,” said Blaak. “Every race is new. It doesn’t matter if it’s the same course or a new course. The weather can change a lot, and also the riders and the situations make the race. It’s always different even if you’ve won before. I was focused on doing a good race again and not thinking about last year so much.”

Coming into the last lap, Boels Dolmans had the numbers in the lead group and began pushing the pace.

This effort quickly led to the group building up a sizable advantage of three minutes over the chase.

Shortly thereafter, Johansson initiated an attack of her own, which was quickly marked by Mackaij and Harris, as well as Blaak, Amy Pieters and who soon joined the three leaders.

Blaak and Johansson were the next two riders to make a move, successfully opening up a 30 second gap over their fellow escapees.

From there, Blaak execute a series of attacks in hopes of jettisoning her breakaway companion.

However, a defiant Johansson would remain on terms with Blaak, until the Dutch rider proved unassailable in a two-up sprint.