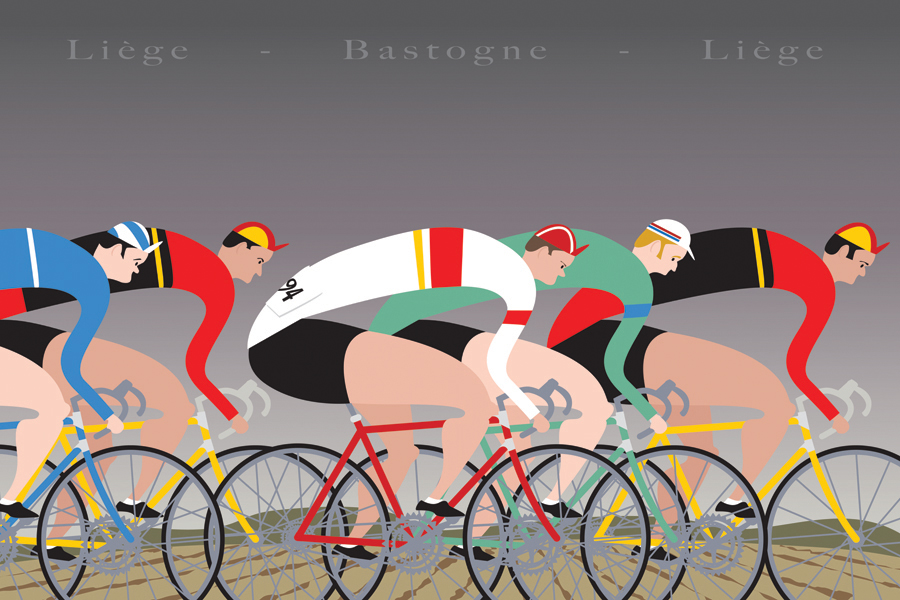 Despite being the clear leader of the race, despite the efforts of his rivals in the closing stages of the 101st edition of the race, there wasn’t much anyone could do against unstoppable Alejandro Valverde. The Spaniard claimed his third Liège-Bastogne-Liège success by beating to the line Frenchman Julian Alaphilippe and his compatriot Joaquim Rodriguez. A few days after winning the Fleche Wallonne, the 35-year-old wins his 6th Ardennes Classic.

Cloudy conditions welcomed the 200 riders on the Place Saint-Lambert of Liège, all ready to battle it out on the 101st edition of the race. After a fairly fast start and quite a few attempts, it took 31 kilometres for eight men to pull away: Matteo Montaguti Minard (AG2R), Diego Ulissi (Lampre), Otto Vergaerde (Topsport), Clément Chevrier (IAM), Marco Minnaard (Wanty), Anthony Turgis (Cofidis), Cesare Benedetti (Bora Argon) and Rasmus Quaade (Cult).

8 men in the lead

While Reinier Honig tried his best to catch up with the escapees, but never actuallly did, it took quite some time for the pack to react and the gap grew to a maximum 7’45 at km 48. Eventually the riders from Europcar started chasing and reached the top of the first climb of the day, the Côte de La Roche-en-Ardenne with a 5’15 deficit.

As expected the first round of the big battle took place on the series of climbs with under 100kms to go. After Quaade, Vergaerde and Chevrier where the first to struggle and drop out of the front group, five men remained in the lead going up the Côte de Wanne. These five were caught by Grivko (Astana) and Yates (Orica) going up the Côte de Stockeu but eventually the pack bunched up again just after the summit.

On the third hill, the Côte de la Haute-Levée, it was Tanel Kangert’s turn to give it a go. The Astana rider was soon to be caught by four other men: his team mate Michele Scarponi, Manuele Boaro (Tinkoff-Saxo), Julian Arredondo (Trek) and Chaves (Orica). The leading five reached the top of the climb with a 25” advantage over the pack. On the following climb, the Col des Rosiers, with Arredondo and Boaro failing to follow their companions, three men were left in the lead including two Astana men. The gap grew to 55” as they reached the summit.

Like on the Fleche Wallonne a few days ago, several falls then shook the pack sending the likes of title-holder Simon Gerrans (Orica), 2013 winner Dan Martin (Cannondale Garmin), Nicolas Roche (SKY), Frank Schleck (Trek) and Mathias Frank (IAM) to the ground. Gerrans even bit the dust a second time just a few kilometres later loosing all hopes of retaining his title. Meanwhile on the climb up the famoud Côte de la Redoute, it was Tanel Kangert’s turn to be dropped leaving Scarponi and Chaves in the lead. The front men reached the top with a 35” advantage over a pack of under 40 riders led by the Movistar team.

With 24kms to go, the escapees were eventually caught back. On the climb up the Côte de la Roche-aux-Faucons, two other riders managed to break away: Roman Kreuziger (Tinkoff Saxo), rapidly caught by Gianpaolo Caruso (Katusha). They enjoyed an 18” lead over the pack at the summit. They were soon to be caught by a third man: Jakob Fuglsang (Astana) and reached the final 10-km mark with an interesting yet slim 15” lead over the pack.

The pack of favourites continued loosing more and more riders as the finish got closer. A group of 25 men eventually caught the courageous three, while Gilbert, Kwiatkowski and Gallopin were dropped on the climb up the Côte de Saint-Nicolas.

With one kilometre to go, Gianpaolo Caruso was leading a group of just under 15 riders when his team mate Daniel Moreno powered away. A fine move that however came slightly too early. The Spaniard was indeed caught by a hungry Valverde followed by 8 other men. On the final straight in Ans, there was nothing anyone could do against Valverde, victoriously crossing the finish line for the third time of his career after his successes in 2006 and 2008. The 35-year-old claimed the win ahead of Frenchman Julian Alaphilippe (Etixx Quickstep) and Joaquim Rodriguez (Katusha).