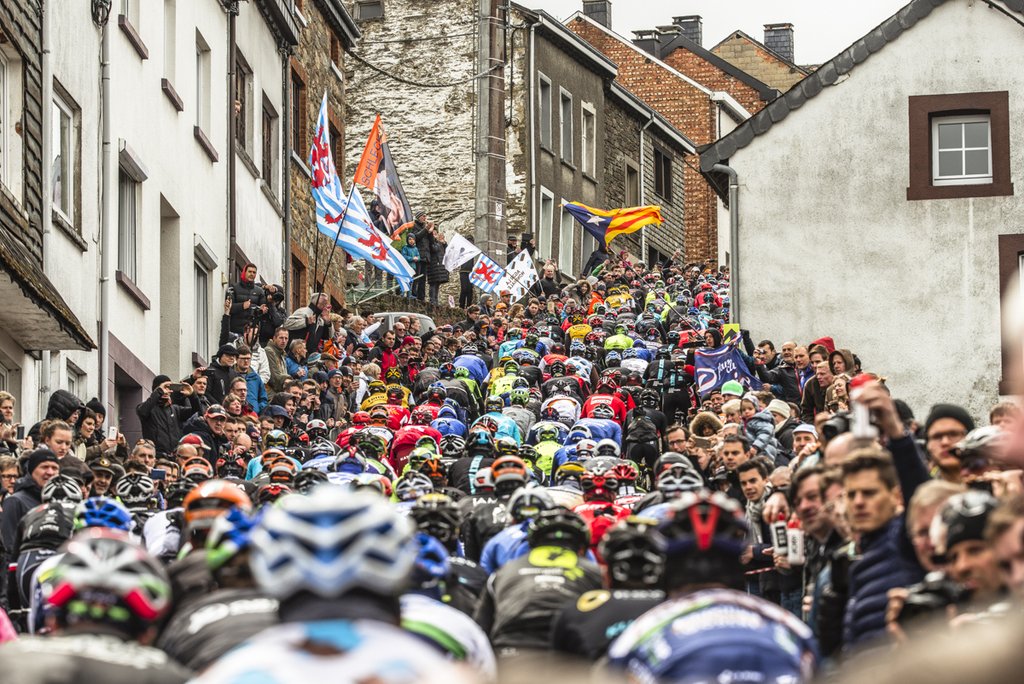 Twenty-eight years after Adri Van Der Poel, a heroic Wout Poels became the fifth Dutchman to win Liège-Bastogne-Liège. The rider from team SKY made the best of the penultimate climb of the day to power away from the favorites group alongside Rui Costa, Michael Albasini and Samuel Sanchez. The decision was finally made on the final straight in Ans where Poels managed to outsprint his rivals, crossing the line in front of Albasini and Rui Costa after a day many will remember for its dreadful weather conditions.

Very cold weather conditions welcomed the riders of Liège-Bastogne-Liège for the start of the 102nd edition of La Doyenne. It was only 1°C as the 200 riders took off from the Place Saint-Lambert in the center of Liège for the 253kms of the race.

While the pack was not too concerned by the early breakaway, an eighth man powered away from the main field: Vegard Stake Laengen (IAM). That was just before the race organisation decided to change the initial course due to the hectic conditions. Indeed from km 45 to km 75 the riders headed south avoiding the more hilly roads (meaning 5kms less). On that new itinerary, Laengen eventually managed to catch the front group at kilometre 51. The gap carried on growing and reached a maximum 8’50”.

After returning to the initial course at km 75, teams Movistar and Etixx Quick Step moved to the front of the pack and started slowly chasing. From 9′ at the top of the Côte de la Roche-en-Ardenne, it went down to 7’50 at the summit of the Côte de Saint-Roch. As Paolo Tiralongo made it first to the top of the Côte de Wanne (84kms from finish), the chasing pack remained 4′ adrift.

On the Col du Maquisard, Pavel Brutt was the first to struggle and was dropped by his former companions. De Marchi made the best of that climb to power away, eventually taking with him De Gendt, Edet and Laengen moments later. On the legendary Côte de la Redoute, Edet was the first to give it a go. The Frenchman was rapidly caught by De Marchi. After clearing the next two climbs, they were finally caught with under 25kms to go by a hungry pack led by the Etixx Quick Step boys.

Just after the Côte de la Roche-aux-Faucons with under 20kms to go, Carlos Betancur was the next to try his luck, but the Colombian was caught five kilometres later after enjoying a slim advantage. As riders continued struggling, just under thirty riders remained together. On the Côte de Saint-Nicolas, Diego Rosa and Ilnur Zakarin managed to power away but that attempt wouldn’t be the decisive one either. Eventually on the penultimate and new climb up the Côte de la Rue Naniot, Michael Albasini would launch the perfect move. On the steep hill, the Swiss took off taking with him three riders: Rui Costa (LAM), Wout Poels (SKY) and Samuel Sanchez (BMC). The front four reached the last kilometre with a 10” lead, enough to start considering victory.

POELS HANGS ON TO GLORY

After a first attempt on the final climb to Ans, Wout Poels moved to the front and launched the final sprint just after the last left turn. The Dutchman managed to hang on all the way to the line, finally beating Albasini and Rui Costa for what would be the greatest victory of his career. Twenty-eight years after Adri Van der Poel, Poels gives the Netherlands a fourth victory on Liège-Bastogne-Liège. Already a winner of stages on Tirreno Adriatico, the Tour of Basque Country and more recently the Tour of Catalunya, The 28-year-old conquers his first ever monument.