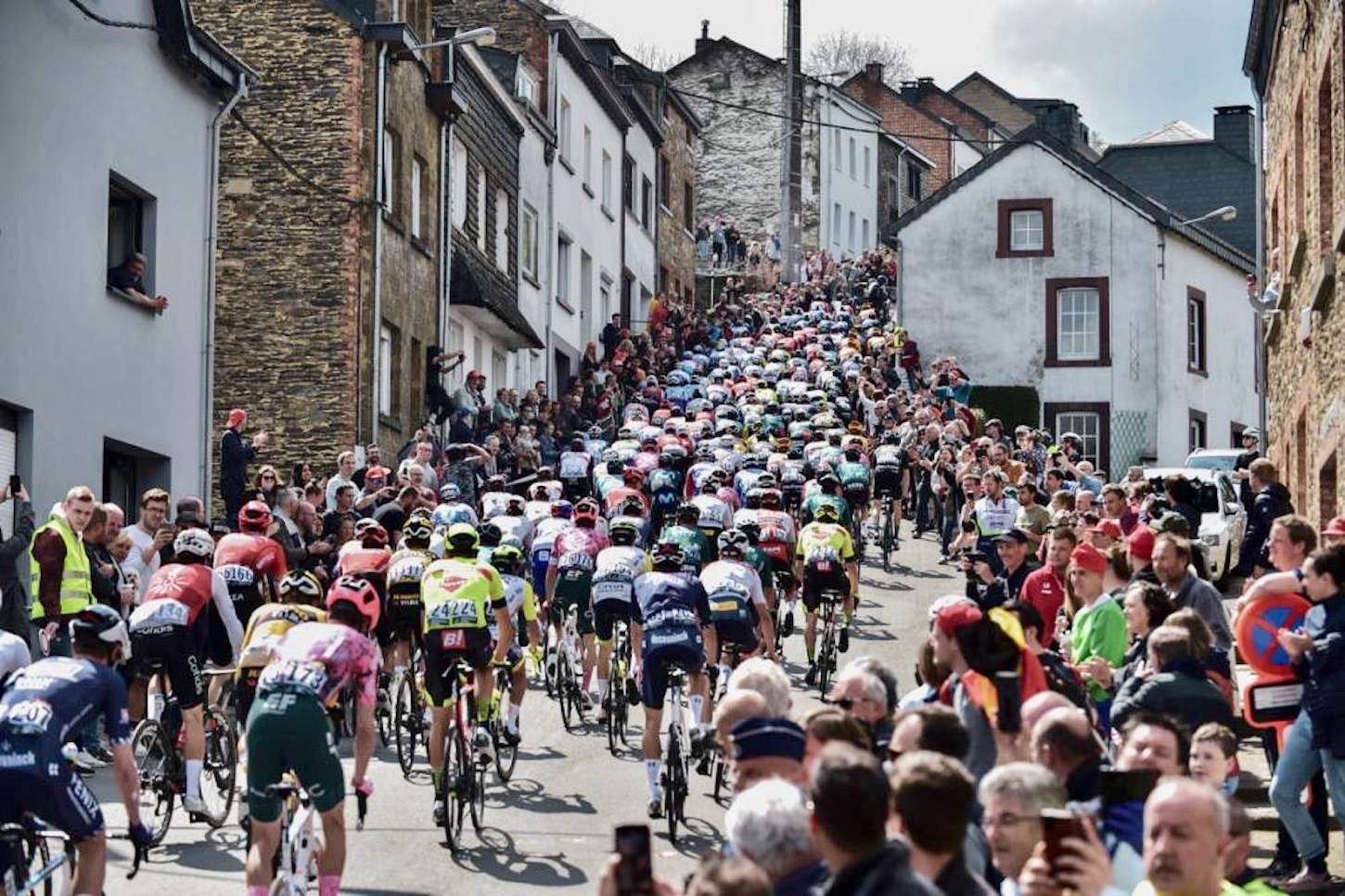 Remco Evenepoel (QuickStep-AlphaVinyl) won today’s Liège-Bastogne-Liège, after the Belgian rider rode clear atop the Côte de la Redoute with just under 30 kilometers remaining, later opening up almost a one minute advantage over the chase to claim this year’s La Doyenne.

Evenepoel’s fierce attack near the top of the Redoute saw the QuickStep-AlphaVinyl rider escape a group of favorites, later making his way past what remained of the day’s early breakaway group, eventually catching the last of the escapees, Bruno Armirail (Groupama-FDJ), along the final ascent of the Côte de la Roche-aux-Faucons with 14 kilometers remaining.

From there, Evenepoel continued to increase his lead, a gap that would prove insurmountable for any would-be chaser along the final run-in to Liège. Indeed, the young Belgian could be seen punching the air in celebration with 3 kilometers still to go.

With 60 kilometers to go, the peloton was plagued by a massive crash that took out several race favorites including Quick-Step’s Julian Alaphilippe, causing a brief lull in the field.

However, it wasn’t long before Mikel Landa (Bahrain-Victorious) decided to animate things with an attack, taking Sepp Kuss (Jumbo-Visma) and Carlos Verona (Movistar) along with him with 43 kilometers left. But, the attack failed to stick thanks to the efforts of UAE Team Emirates and Quick-Step Alpha Vinyl.

Another series of attacks ensued from there, as the peloton approached the Côte de la Redoute, with Amirail deciding to jettison his fellow breakaway companions over the top of the climb.

With 28 kilometers remaining, Evenepoel launched a stinging attack, with Paul Ourselin quick to mark his move. But, the TotalEnergies rider couldn’t match the acceleration of his rival, eventually getting dropped on an unclassified climb some 4 kilometers later.

Meanwhile, Movistar, Bahrain-Victorious and Ineos Grenadiers set a fierce pace in what remained of the peloton.

But, despite the collective effort, Evenepoel continued to extend his lead to more than half a minute with 15 kilometers remaining.

Amirail would only survive until the foot of the Côte de la Roche-aux-Faucons as Evenepoel pushed on alone. Under the strain of the climb, the peloton managed to claw back some of Evenepoel’s lead. But, a plunging  descent allowed him to maintain a sufficient gap.

With 10 kilometers to go, Michael Woods (Israel-Premier Tech) decided to spring into action with a flurry of attacks that would see Wout van Aert (Jumbo-Visma) and his teammate Jakob Fuglsang get briefly dropped.

Back up front, Evenepoel was still clinging to a 20 second margin, later extending it as he hit the flat run into Liège.

Back in the peloton, more attacks got underway, with Aleksandr Vlasov (Bora-Hansgrohe) featuring prominently.

However, at that point it became a race for second place, as there was no reining in Evenepoel, who rode into Liège in solo fashion.