Love Him or Hate Him, Alejandro Valverde Is the Best Male Rider of the Post-Armstrong Era 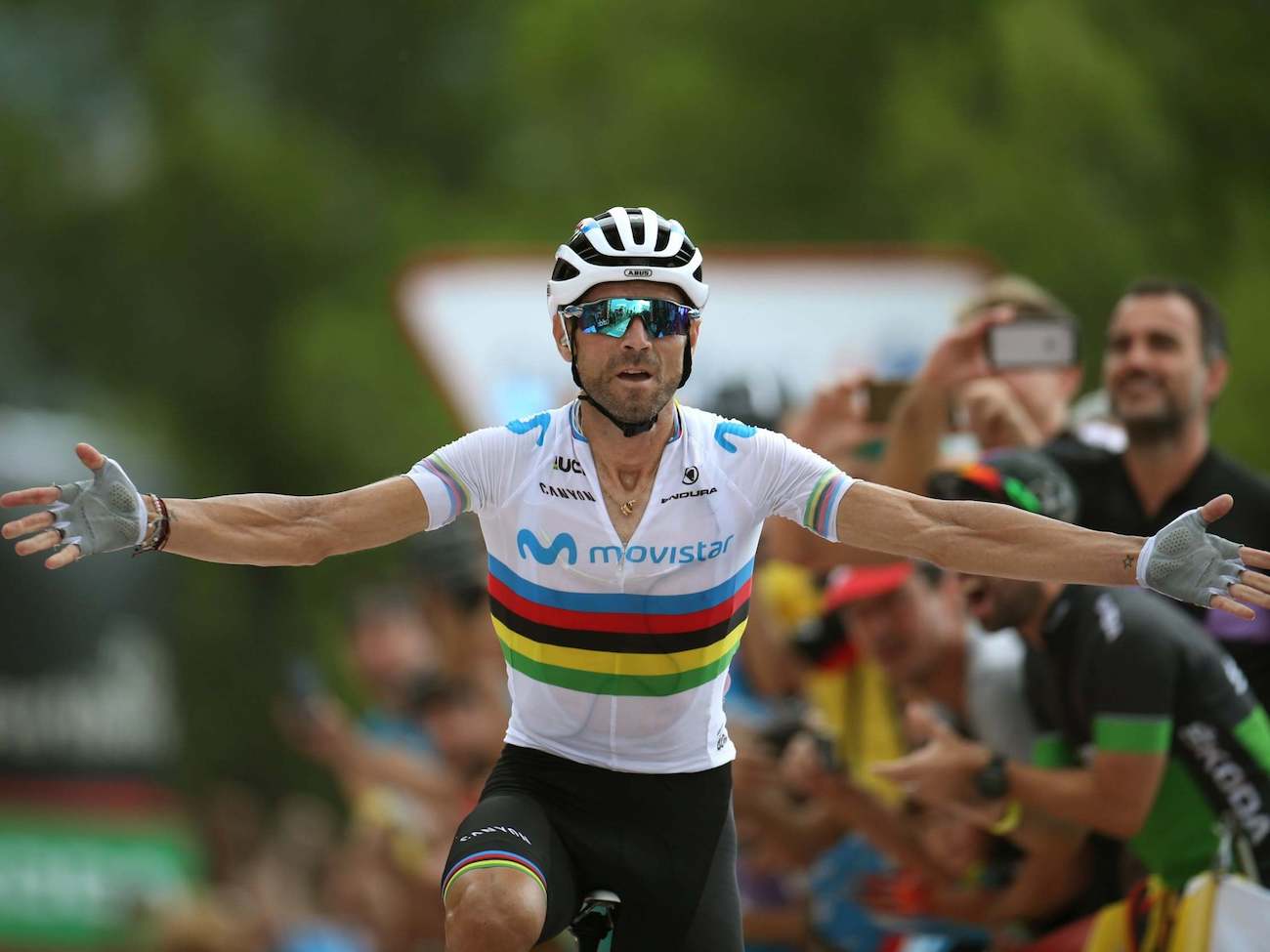 There are few riders in professional cycling more successful – or more divisive – than Movistar’s Alejandro Valverde Belmonte. First showing up as an amateur racer in 1989 at the age of nine, the Spanish rider turned pro in 2002, and came of age during cycling’s infamous EPO era. In 2005, he joined the Illes Balears-Banesto team, the organization he has remained with for fifteen years – a remarkable tenure with one team given the transfer-happy nature of pro cycling today.

Snagged in the 2006 Operacion Puerto doping dragnet, Valverde quietly served a two-year suspension in 2010 and 2011, but has since come back with a vengeance. Over the course of his career, Valverde has racked up a total of 127 race wins, overall victory at the Vuelta, eight additional grand tour podiums, four Liege-Bastogne-Liege victories, five wins at Fleche Wallone, eleven podiums in the Spanish national championships, six podiums in other cycling Monuments, and more than a dozen podiums in other stage races to name just a few of his accomplishments. And he reached a new peak last year at Innsbruck last year, becoming the second oldest racer ever, at age 38, to win the World Championships.

And if you look behind the well-known races and all the familiar statistics with which most cycling fans are familiar, the breadth of Valverde’s palmares is even more astonishing. He has won the Tour of the Basque Country, the Dauphine twice, and the Volta a Catalunya three times. While the UCI WorldTour Points Ranking isn’t a particularly high-profile metric, it is as close to an overall performance metric as the sport has, and Valverde has finished at the top of that ranking a remarkable five times in the last twelve seasons. (Over that same period, only countryman Joaquim Rodriguez has won it more than once.) In the last sixteen seasons, he has led his team in victories thirteen times. Valverde’s performance and his consistency over almost two decades of top-level racing is nothing short of remarkable.

In the past eight seasons, since coming back from his doping suspension, Valverde has averaged 8.4 wins and 40 top ten placings per year. Chris Froome, undoubtedly the best grand tour rider since Lance Armstrong, has averaged 5.5 wins and 24 top tens over that same period. And Froome was in his physical prime over this period (27 – 34 years of age), while Valverde was 32 years old when he came back from his doping suspension – and he has actually improved as he approaches his 40th year.

During the 2018 season for example, Valverde won 14 races, the second-most in his career, snagged 40 top tens and won the prestigious World Championships – at the age of 38. This past season at age 39 he experienced a drop off in the number of wins (just five), but he actually scored more top ten finishes – 43, the fifth-most in his career and his best mark since 2016. Further underlining his prolific success, he has led his Movistar team in number of wins for every one the past six seasons. This kind of consistency in a racer nearing 40 years of age is virtually unprecedented.

Valverde’s accomplishments are even more impressive if you consider the wide range of races in which he is able to be competitive. While true grand tour contenders like Froome, Dumoulin, and Roglič use their combination of climbing and time trialing abilities to target the Giro, Tour, and Vuelta, Valverde netted 11th place at the 2018 Dwars door Vlaanderen – a race reserved mostly for stout classic specialists like Tom Boonen and Niki Terpstra. Later that season, he finished 5th overall at a mountainous Vuelta a España and then won a climber-friendly edition of the Road Race World Championship. His wide range in racing abilities is very rare in today’s hyper-specialized racing environment – where the lines between sprinters, general classification, and spring classic one-day specialists are rather starkly delineated.

But to many cycling fans, Valverde is still a tangible reminder of the darkest days of professional cycling. Critics believe that he has effectively thumbed his nose at the current anti-doping establishment by never publicly apologizing for his ban. In fact, Valverde has never really commented much at all about his doping suspension, although he has recently opened up somewhat and admitted that he faced serious depression problems, following his guilty verdict from the Court of Arbitration for Sport (CAS).

Perhaps because of his silence, many fans view and treat Valverde with more suspicion than other riders who have served doping bans to return to the sport (for example, David Millar); and based upon his performance during his later career, some skeptics have questioned whether he ever left his old practices behind. There are certainly reasonable questions to be asked as to why most riders experience a significant drop off in performance after returning from doping bans (for example, Alberto Contador or Thomas Dekker) while Valverde has actually improved.

But without any physical proof of rule-breaking, he should be extended the same level of trust as any other professional cyclist. After all, even though he protested his innocence, Valverde served his ban, while there were many other big names on the Puerto list who were never definitively identified or brought to justice. As one observer said, Valverde may not be a saint, but he’s not trying to be a martyr either. He undergoes the same testing protocols as everyone else, and his relatively high number of race days means that he subjects himself to more testing than most GC-specific riders, many of whom train for extended periods at remote retreats.

So while Valverde may be shunned in certain circles, in others he is a timeless wonder and a Spanish national hero. And whatever your personal opinion is, there can be no doubt that he is a remarkably durable and consistent rider who has long displayed a world-class tactical nous and a clever knack for winning. Valverde has demonstrated remarkable consistency and an ability to not only compete, but win, in races across the wide spectrum of professional road cycling. Peter Sagan may dazzle in tough sprint finishes and one-day classics, while Chris Froome has controlled grand tours with impressive consistency. Riders like Tom Dumoulin and Primož Roglič look set to inherit that mantle. But Valverde has been able to go toe-to-toe with and challenge all of these very different riders on their own turf.

The respected and highly analytical CQ Ranking system, which has numerically tracked pro cycling since 2005, lists Valverde at the very top in terms of points scored over that period, towering over the second-place Peter Sagan by almost seventy percent. And though he has narrowly missed standing on the top step at the Tour and Giro, the CyclingRanking.com website lists Valverde as the fourth-best rider of all-time, just behind Merckx, Kelly and Bartali; no other active cyclist even ranks in their top twenty.

Valverde first came to prominence toward the end of the Lance Armstrong era – eking out a victory over the Texan for his first Tour de France victory on stage 10 in 2005, on the slopes of the Courchevel. From a historical retrospective, one might view Valverde taking that win from Armstrong as the passing of the torch from one dominant racer to the next. While that hand-off is tarnished by time and history, the hard numbers suggest that the 39-year old Valverde deserves to be considered the best rider in the post-Lance Armstrong era, and among the best of any era. And when contacted, Armstrong himself said “I agree completely – that dude is a complete badass on a bike.”

No matter how you look at him, if Valverde is, in fact, able to fulfill his dream of winning the 2020 Olympic Road Race in Tokyo at the ripe old age of 40, the sport would be crowning a consistent, indefatigable and deserving champion.