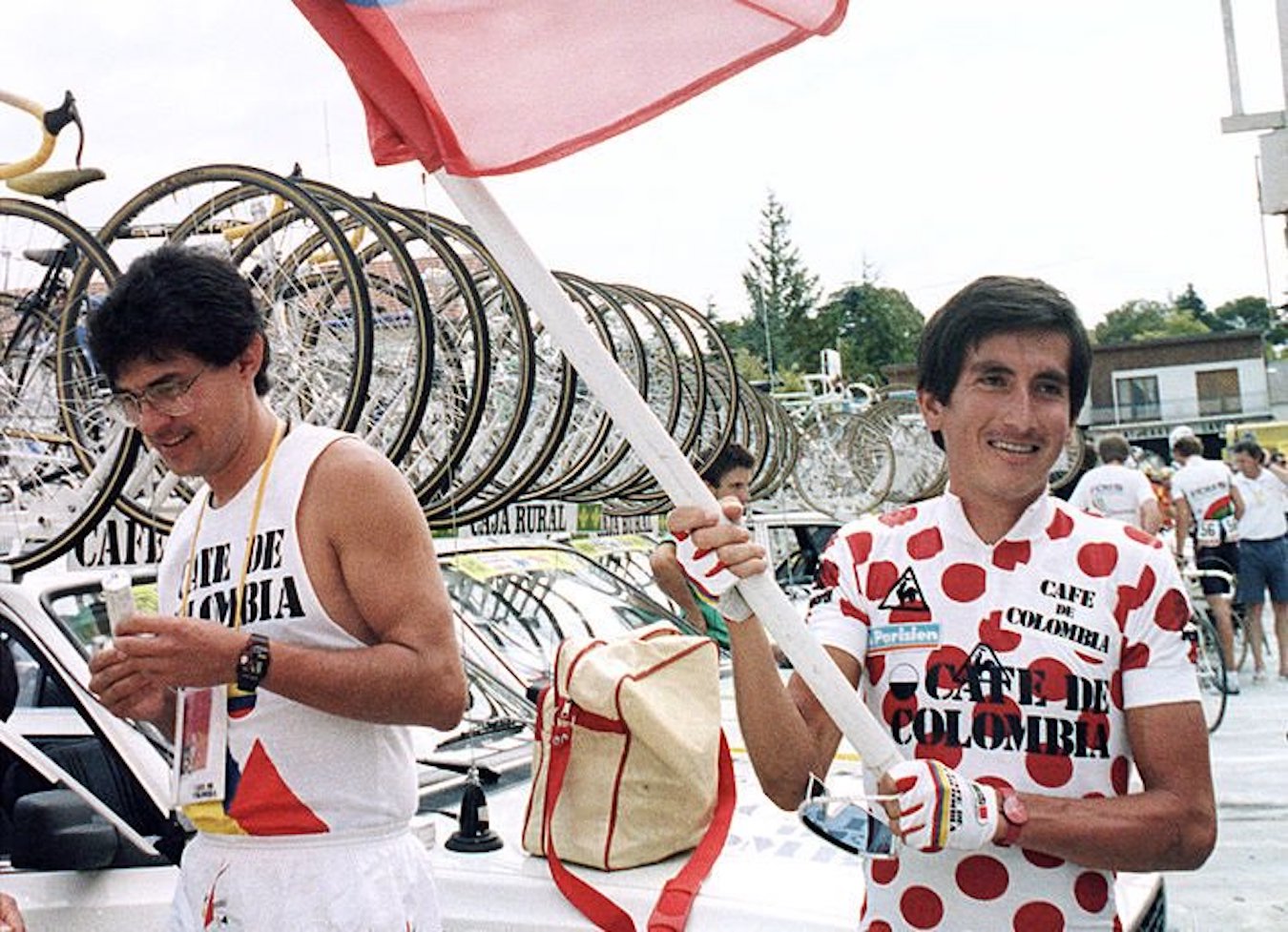 A belated happy birthday to Luis Herrera, who was born May 4, 1961.

The Colombian is best known for being only the second rider in history to win the prestigious Mountains Jersey in all three Grand Tours.

Perhaps his greatest achievement however, was winning the overall title in the 1987 Spanish Grand Tour ahead of Raimund Dietzen of Germany and Laurent Fignon of France.

Born Luis Alberto “Lucho” Herrera, he grew up in the small town of Fusagasugá (Fusa, for short), a few kilometers south-west of Bogota.

Growing up on a farm, meant most of Herrera’s daily life involved hard labor, which consisted of everything from tending to livestock, to picking coffee alongside his mother. But, the young Herrera found refuge from his arduous daily routine by playing soccer and running track at school.

However, his introduction to cycling came by way of this mother, who bought him a bike to ride back and forth to school in order to alleviate foot pain caused by flat-feet.

After finishing school, Herrera opened his own nursery, earning him the nickname “El Jardinerito” (The Little Gardener), which would later stick throughout his cycling career.

According to Herrera, his interest in cycling began after he was encouraged by his brother Rafael to participate in a small race in Fusa.

Yet, despite not finishing very well, the aspiring rider said he fell in love with the sport and over time started to take it more seriously.

After further training, Herrera entered his first serious race in 1977, the Colombian Amateur Championship, where he finished 21st.

Two years later, he raced the Vuelta de la Juventud (the amateur version of the Vuelta a Colombia), where he continued to improve his racing skills.

Herrera continued honing his skills while riding for a number of small amateur teams, finally catching his big break when he was signed by the professional Valyain team in 1981.

With the backing of a pro-team, Herrera was eligible to race in the Clasico RCN that year.

The Clasico was Colombia’s most important race next to the Vuelta a Colombia during the 1970’s and 1980’s, wherein it attracted plenty of international talent and top European teams.

Herrera went on to win a stage in that year’s race, marking his first major victory as a pro rider. Later on in the season, the team brought him to his first Vuelta a Colombia.

This proved to be Herrera’s greatest learning experience, as he took what he had learned from the Vuelta, and returned to the RCN the following year and literally “cleaned house”, winning the King of the Mountains classification, two stages and the overall victory while riding for the bigger Freskola team.

“Beating Pascal Simon, [Robert] Millar and [Fabio] Parra (who had just won the Vuelta a Colombia) was amazing for me. No one knew who I was before the race”, Herrera remarked after winning the Clasico RCN.

As a result of his dominant victory in the Clasico RCN, he caught the attention of Colombia’s National Team coach, who sent him to compete in that year’s Tour de L’Avenir.

Herrera would claim a prophetic victory in the Tour de L’Avenir, after winning the summit finish to Morzine, the same famous mountainous stage that he would win years later in Tour de France while in pursuit of his first Polka Dot Jersey.

1980 marked an epic year for Colombian cycling, as Alfonso Flores won the Tour de l’Avenir, while Patrocinio Jimenez and Cristobal Pérez made the podium in 1981 and 1982 editions as well. In addition, Jimenez also won the Coors Classic in 1982.

As a result, cycling had rapidly become a source of pride for the small Latin country, and it wasn’t long before “El Jardinerito” joined the celebrity status of his compatriots.

In 1983, the Colombian team went to the Coors Classic looking to defend the title Jimenez had given them the prior year. This time Herrera was the team leader.

On the toughest stage of the race, with over 6,500 feet of climbing, Herrera and fellow Colombian Israel “Pinocho” Corredor easily left the field behind on the final climb.

“The descent was another story. They went down during a hail storm so heavy, they had to ride on the tracks left by the cars ahead of them. They held the gap to the chasers, Lucho won the stage, and took the overall lead. The Colombians’ inexperience, however, showed on the last stage to Cheyenne, Wyoming. “We had that race in the pocket,” remembers Herrera, “but we lost it because of our lack of experience. We didn’t control the race in the last stage. Of course, all the other teams ganged up on us and I went from first [in the GC], to third.” The Colombians were not only faced with all the opposing teams’ attacks, but with cross winds they had never experienced before. Herrera lost over seven minutes”, recounts cycling journalist Mike Spriggs.

Next season saw even greater achievements for Herrera and Colombia.

Herrera once again won the Clasico RCN, this time vanquishing such formidable rivals as Fignon, Simon, LeMond, Madiot and Millar, while also claiming his first Vuelta a Colombia title.

Come Tour de France time, Herrera once again found himself leader for the all Colombian team that was now being sponsored by the German battery company Varta.

“I was very nervous. I was about to participate in the most important race in the world, and to top it off no one respected us. We had been labeled amateurs, while everyone else was a pro. We suffered a lot, especially at the end of stages”, said Herrera.

Herrera would go on to win the venerable climb of Alpe d’Huez, dispatching the likes of Phil Anderson, Peter Winnen, Hinault, Fignon and Rafael Acevedo along the famed 21 switchback ascent.

“It was a very tough stage. Two climbs from the end we were five minutes behind the peloton, but [Rafael] Acevedo and I chased hard. We caught the main field in a feeding zone. The group was beginning to come apart. I ended up with Fignon and Hinault, but I left them behind [on the slopes of the final climb], and went on to win the stage. The last few kilometers I did all-out. It meant a lot to me, to Latin America and to Colombia”, remembers Herrera.

The following season brought more epic victories for Herrera in the Tour de France, which saw him beat Hinault during a famous head-to-head battle along slopes to Avoriaz.

Hinault would later suggest that he had let his Colombian rival win the stage, but Herrera recalled a different version.

“Hinault told me that he wanted the stage. I told him no, that we’d have to race for it. He was angry, so I attacked him and he asked me to wait, to climb at a steady pace. We did. After a while I almost lost his wheel, but I kept up. The last 2 kilometers were calm, but a few meters from the line I left him behind and won. The satisfaction was immense, I had just beat the leader of the Tour.”

Just two days after his impressive defeat of Hinault on the climb to Lans-en-Vercors, despite crashing along the descent, a tired and bloodied Herrera gave Colombia more to celebrate after he won the stage to Saint-Étienne and captured the prestigious Polka Dot Climber’s Jersey.

“On that stage I had to chase the break, and caught them, but on the descent [from Croix de Chaubouret] there was mud everywhere. I tried to avoid it, but couldn’t and I crashed”, said Herrera.

Herrera reprised his Clasico RCN victory the following season, again trouncing his arch-rival Hinault in the prologue, the individual time trial and the King of the Mountains and Combined Classifications.

“It was very rewarding… to beat Hinault both, in the prologue and in the ITT. I won the overall, the KOM and the Combination Jersey. [Hinault] had a tough time, but finished in style winning the final ITT”, he said.

Illness plagued Herrera for most of 1986, which left him with his first winless season since he was an amateur rider. However, the following year would prove to be his zenith.

Now riding for the Café De Colombia as its captain, Herrera led the Colombian squad to victory in that year’s Vuelta a Espana, winning both the overall title, as well as the Mountains Classification, while fending-off attacks from Pedro Delgado, Fignon and Sean Kelly in all aspects of the race.

Herrera followed up his Vuelta a Espana triumph with a 5th place finish in that year’s Tour de France, while once again claiming the coveted Polka Dot Climber’s Jersey.

Herrera retired from racing in 1992, having amassed no fewer than 76 victories and earning the distinction of being one of only two riders to win the King of the Mountains jersey in all three Grand Tours – the first being Federico Bahamontes of Spain.