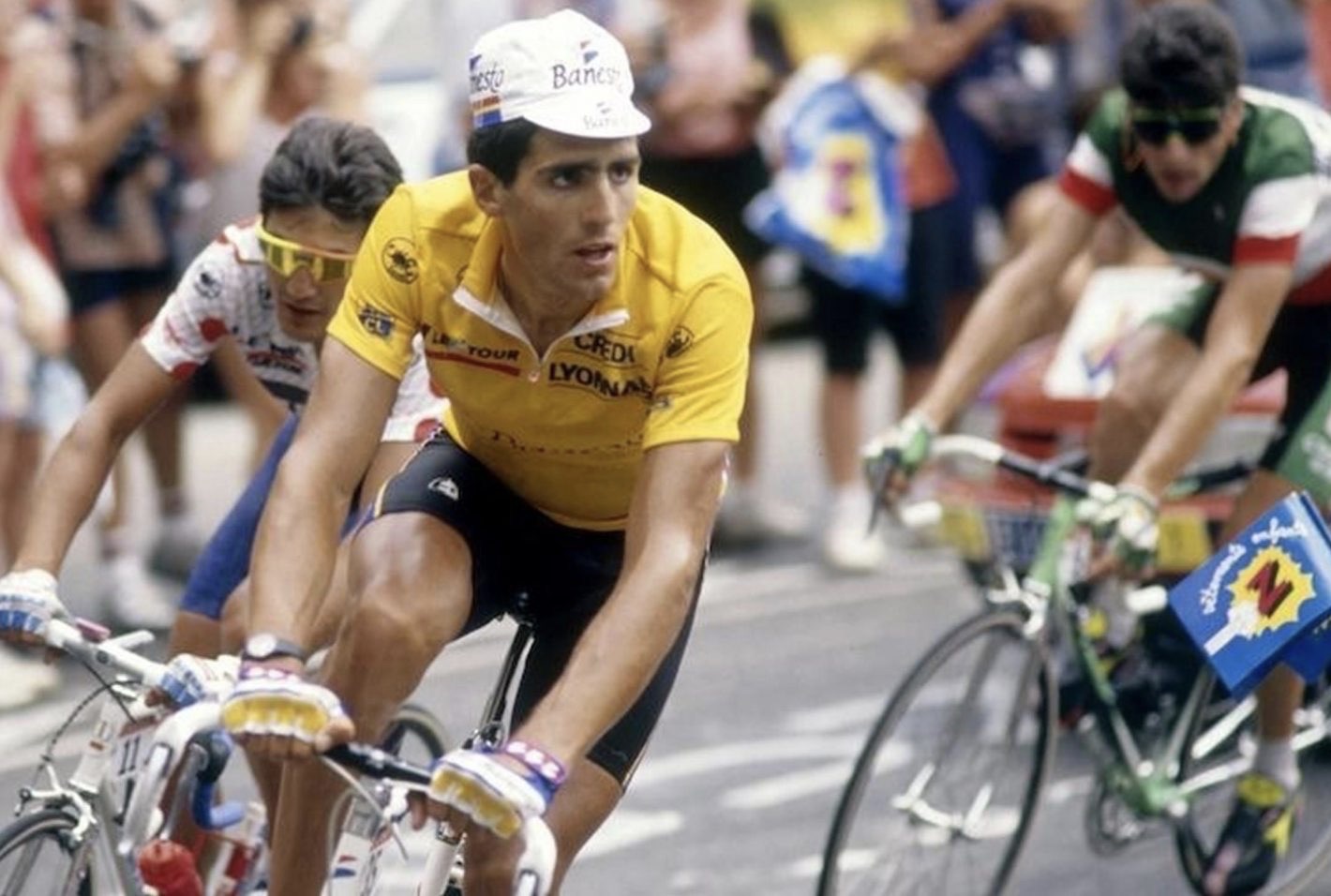 A belated happy birthday to Miguel Induráin, who was born on July 16, 1964.

The Spanish rider is best known for his five consecutive Tour de France victories in 1991 to 1995, being the first rider to accomplish this feat.

“Big Mig” as he was nicknamed, also won the Giro d’Italia twice in 1992 and 1993, which earned him the distinction of a Grand Tour-Double during those years as well.

Induráin had a similar strategy to that of French cycling legend Jacques Anquetil. That is, to win the time trials and hold on in the mountains.

However, Induráin was capable of more than just holding on in the mountains, as he was an accomplished climber who could easily apply pressure on his rivals during the climbs as well.

In addition, his physiological make-up also made him a force to be reckoned with on the flats, as his large frame and power to weight ratio put him on par with many of the best sprinters of the day.

Additionally, Induráin was a dominant rider in the time trial events also, winning the inaugural time trial event when it was first introduced at the 1996 Olympics Games. He also won the World Championship Time Trial the previous year.

While Induráin didn’t win any of cycling’s Five Monuments, or a World Championship Road Race, he did come close on three occasions.

For instance, in the 1993 World Championship Road Race, Indurain finished 2nd behind a young Lance Armstrong, a year in which the Spaniard won the Tour de France and the Giro d’Italia. A win in the World Championship Road Race that year would have earned him the coveted “Triple Crown”, a feat which has only been achieved on two occasions – once in 1974 by Belgium’s Eddy Merckx and next by Ireland’s Stephen Roche in 1987.

Induráin also finished 2nd in the World Championship Road Race in 1995, sacrificing himself for his teammate Abraham Olana by blocking other riders by sitting “on their wheels” while they chased his fellow Banesto rider in earnest.

Induráin was also 3rd in the 1991 World Championship Road Race behind Gianni Bugno of Italy and Steven Rooks of Holland.

In other Grand Tour events, Indurain finished 2nd in the 1991 Vuelta a Espana behind Melchor Mauri Prat of Spain. He also finished 3rd in the 1994 Giro d’Italia behind Evgeni Berzin of Russia and Marco Pantani of Italy.

In addition to the Tour de France and the Giro d’Italia, Indurain won Paris–Nice twice, the Daphine Libere twice and the Tour of Catalonia three times.

Induráin’s reign in the Tour de France came to an end in 1996 when he was defeated rather soundly by Denmark’s Bjarne Riis.

His first encounter with a bicycle came at the young age of 10, when he was given a green secondhand Olmo for his birthday. However, it was stolen the next year, requiring him to work in the fields alongside his father in order to pay for a new one.

Induráin joined his first cycling team in 1978, riding as junior for the local CC Villavés team.

After winning his first race that year, he competed every week thereafter, later winning the Spanish National Amateur Road Championship at just 18 – the youngest rider ever to do so.

In 1984, Indurain rode in the Olympic Games in Los Angeles, turning professional later in September of that year for the Reynolds team. He won his first professional race a week later – a time trial in the Tour de l’Avenir.

Induráin rode his first Vuelta a España the following year, finishing second in the opening prologue behind Bert Oosterbosch. Oosterbosch lost time on the second stage and Induráin became leader, the youngest rider to do so in the Spanish Grand Tour, before relinquishing the jersey.

Induráin rode his first Tour de France later that year as well, but abandoned after only the fourth stage. He again dropped out of the Tour the following season, this time abandoning on the 12th stage.

The next few seasons were highlighted by a mixed-bag of results for Induráin, who found himself riding in support of other riders such as Pedro Delgado, who won the Tour in 1988.

The following year, Induráin captured the polkadot jersey in the mountains classification for a brief period, after escaping during the ninth stage – the only time in his career that he would don the coveted red and white jersey.

In 1990, Induráin again rode the Tour de France in support of Delgado, but his compatriot could not deliver that year. As a result, he finished in 10th place, sacrificing his chances for a podium finish by waiting for Delgado during most of stages.

But, the following year would mark Induráin’s rise to stardom, after winning his first Tour de France victory.

While Greg LeMond was the heavy favorite to win that year’s Tour, the American rider “cracked” along the climb of the Tourmalet during the 13th stage, losing more than seven minutes to Induráin, who went on to victory.

Induráin continued his winning ways for the next five seasons, claiming consecutive Tour de France titles, along with triumphs in the Giro d’Italia as well.

In 1996, Induráin received a lucrative offer from the well-known ONCE team manager, Manolo Saiz, to come and ride for his squad.

However, negotiations floundered over which races Induráin would compete in, and whether Saiz would provide additional compensation in the future as promised.

As negotiations continued to stall, Induráin announced his retirement in front a large crowd of journalists and fabs at the El Toro hotel in Pamplona in January 1997.

“This is a long and deeply meditated decision, especially as physically I’m in condition to win a sixth Tour”, he said. “In early 1996 I decided it was time to go, and I tried to win the Tour for the last time. When I didn’t, I thought the Olympics would be the perfect way of bowing out, but what happened after the Tour of Spain made me change my mind. Every year it gets harder and I think I have spent enough time in the sport. My family are waiting.”

After reading a prepared statement, the Spanish cycling icon left without taking questions.

Induráin now lives near Pamplona, along with his wife Marisa and their three children. He founded the Miguel Induráin Foundation in 1998 to promote cycling in his home region of Navarra.

According to Induráin, he continues to ride three or four times a week, while also attending sportive events such as L’Étape du Tour, the Mallorca312 and the Cape Argus Pick & Pay Cycle Tour in Cape Town, South Africa.

He most recently raced in the 2017 Redhook Crit in Barcelona.

A retrospective of Induráin’s character by journalists and former teammates, outlines a man who was widely considered as being “humble”, “one without airs about himself who reluctantly steps into the limelight” and a man who is “modest and quiet and governs his teammates without ever being demanding”.