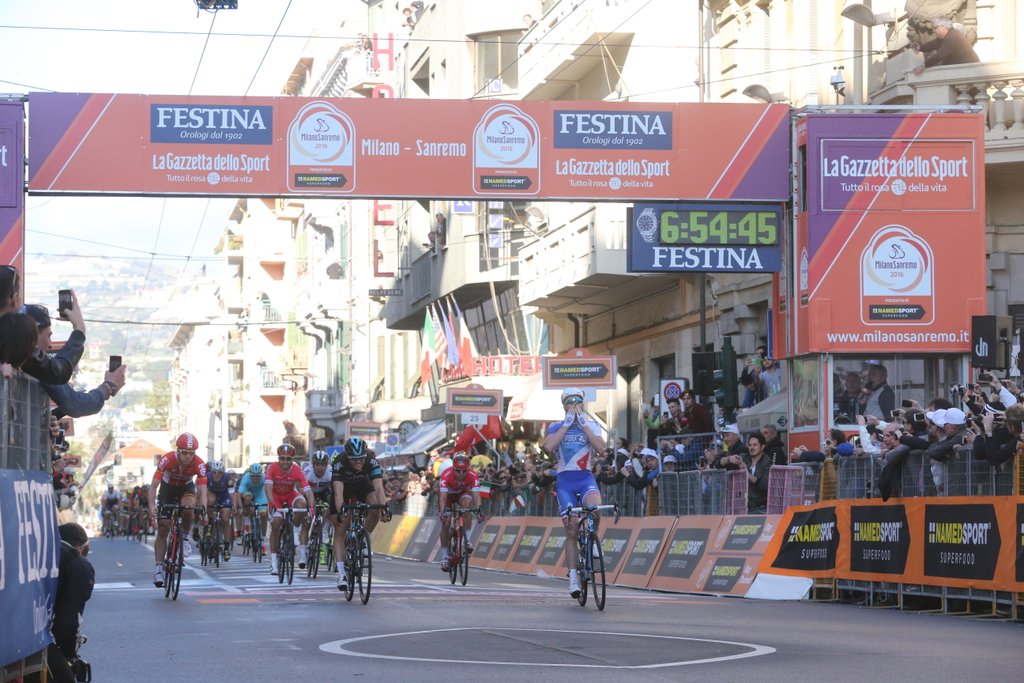 Arnaud Demare (FDJ) claimed today’s Milan – San Remo by a mere half a bike length, after nixing Ben Swift (Sky) and Jurgen Roelandts (Lotto Soudal) in a final dash for the line.

Today’s race was plagued by numerous crashes, with Etixx-Quickstep’s, Fernando Gaviria, getting the worst of it, after the Colombian rider hit the tarmac following a touching of wheels during the final corner, which also served to knock World Champion Peter Sagan (Tinkoff) off line as well.

As a result, Demare took advantage of the chaos, and came around Roelandts and Swift during the closing meters to snatch the victory.

From there, the group went on to establish a considerable advantage of around 11 minutes over the peloton – after 50 kilometers.

However, the peloton would continue to chip way at their advantage under the auspices of Tinkoff and Katusha. And, after the climb of the Turchino, the breakaway group’s lead had been cut in half, while Dimension Data and Etixx-QuickStep joined Katusha and Tinkoff up at the front.

Not long after, the peloton was briefly disrupted by a crash at the base of the Capo Mele, leaving a few riders struggling to catch back up.

Inside 50 kilometers to go, and there was a changing of the guard at the front of the peloton, with Lotto-Soudal, Cannondale, BMC and Orica-GreeEdge helping to lead the chase.

Following the small climbs of Capo Cervo and Capo Berta, the breakaway group’s advantage had fallen to just 45 seconds over the chase.

Sensing that the catch was imminent, Tjallingii and Coleman decided to set out on their own, as they headed towards the Cypress – only to be quickly joined by Maestri, Kluge, Barta and Bono.

Back in the chase, more crashes plagued the peloton, this time ensnaring Team Sky’s Geraint Thomas and Peter Kennaugh, along with Daniele Bennati (Tinkoff) and Michael Matthews (Orica-GreenEdge) – leaving Matthews with the greatest task of trying to catch back up.

Up front, Astana took up the task of setting the pace over the Cipressa, while one-by-one reclaiming several of the day’s escapees along the way.

Once over the Cipressa, Ian Stannard (Sky) and Giovanni Visconti (Movistar) decided to go on the attack, while Daniel Oss (BMC), Matteo Montaguti (Ag2r) and Fabio Sabatini (Etixx-QuickStep), quickly joined the two leaders.

However, the quintet’s efforts were short-lived, as they were caught just before the start of the final climb of the Poggio.

While Luke Rowe (Sky) was leading the peloton up the Poggio, Andrea Fedi (Southeast) decided to launch an attack, but to no avail.

Next came Tony Gallopin (Lotto-Soudal), followed by Michal Kwiatkowski (Sky), who quickly opened up a slight lead for himself along the descent.

This in turn prompted a reaction from Vincenzo Nibali (Astana), Peter Sagan (Tinkoff) and Fabian Cancellara (Trek-Segafredo), who proceeded  to chase the Polish rider in earnest.

However, the duo would quickly fade, allowing a host of top sprinters to make their way to the front to contest the sprint, with Demare emerging as the winner.

“This is incredible,” said Demare after the finish. “There are days like this one in which everything works despite the occasional hiccup, like crashing at the bottom of the Cypress”.

“I made it across at the bottom of the Poggio and the entire way I felt fantastic. I became the under-23 world champion in similar conditions after crashing. I’m delighted to win Milan-San Remo. This is a big one and has been running for over a century. It’s extraordinary. I’m extremely happy.”